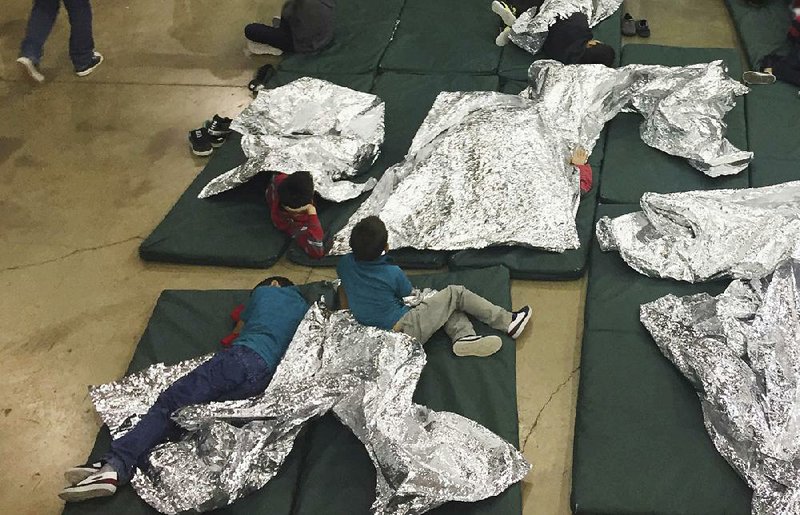 In this photo provided by U.S. Customs and Border Protection, youths rest in one of the cages at a center in McAllen, Texas, near the three “tender age” centers where babies and young children separated from their parents are being held.

President Donald Trump's administration has set up at least three "tender-age" shelters to detain babies and other young children who have been forcibly separated from their parents at the U.S.-Mexico border, The Associated Press has learned.

Doctors and lawyers who have visited the shelters in south Texas' Rio Grande Valley said the facilities were fine, clean and safe, but the children -- who have no idea where their parents are -- were hysterical, crying and acting out. Many of them are under age 5, and some are so young they have not yet learned to talk.

The government also plans to open a fourth shelter to house hundreds of young children in Houston, where city leaders denounced the move Tuesday.

The government has already faced withering critiques over images of some of the children in cages inside U.S. Border Patrol processing stations. It faced renewed criticism for setting up new places to hold the toddlers, decades after orphanages were phased out over concerns about the lasting trauma to children.

By law, children traveling alone must be sent to facilities run by the U.S. Department of Health and Human Services within three days of being detained. The agency then is responsible for placing the children in shelters or foster homes until they are united with a relative or sponsor in the community as they await immigration court hearings.

On Wednesday, Trump signed an executive order ending the separation of families, saying that he didn't like the sight of children being removed from their parents. But the president added that the "zero tolerance" policy will continue, and children will be held along with their parents in immigration detention while the parents are prosecuted. The order does not detail how children now in the government's care will be reunited with their parents.

The three Texas centers -- in Combes, Raymondville and Brownsville -- have been rapidly repurposed to serve needs of children. A fourth, planned for Houston, would house up to 240 children in a warehouse previously used for people displaced by Hurricane Harvey, Mayor Sylvester Turner said.

Turner said he met with officials from Austin-based Southwest Key Programs, the contractor that operates some of the child shelters, to ask them to reconsider their plans. A spokesman for Southwest Key didn't immediately reply to an email seeking comment.

"And so there comes a point in time we draw a line, and for me, the line is with these children," Turner said during a news conference Tuesday.

The order Trump signed Wednesday directs federal agencies to work with the Defense Department to prepare facilities to house detained families. During the surge of unaccompanied children crossing the border in 2014, Health and Human Services set up several temporary facilities at military bases.

On a practical level, the zero-tolerance policy has overwhelmed federal agencies in charge of caring for the new influx of children who tend to be much younger than teens who typically have been traveling to the U.S. alone. Some recent detainees are infants, taken from their mothers.

The largest foster care agency handling young children in the U.S. is Bethany Christian Services, whose 99 available foster beds in Michigan and Maryland are filled.

The group's chief executive officer, Chris Palusky, said the youngest child separated from parents at the border is 8 months old. The average age of children in the organization's care dropped from 14 to 7 years old in recent weeks, Palusky said.

The youngest children, he said, are shell-shocked -- crying themselves to sleep.

"Then they wake up from their naps and again they're crying for their mom, asking: 'Where's my dad?'" he said. "They absolutely need their parents right now."

Days after Attorney General Jeff Sessions announced the zero-tolerance policy, the government issued a call for proposals from shelter and foster-care providers to provide services for the new influx of children taken from their families after journeying from Honduras, El Salvador, Guatemala and Mexico.

At a news briefing Tuesday, reporters repeatedly asked for an age breakdown of the children who have been taken. Officials from law enforcement agencies and Health and Human Services said they didn't know how many children were under age 5, under age 2, or even so young they're non-verbal.

"The facilities that they have for the most part are not licensed for tender-age children," said Michelle Brane, director of migrant rights at the Women's Refugee Commission, who met with a 4-year-old girl in diapers in a warehouse in McAllen, Texas, where Border Patrol temporarily holds families. "There is no model for how you house tons of little children in cots institutionally in our country. We don't do orphanages, our child welfare has recognized that is an inappropriate setting for little children."

Information for this article was contributed by Colleen Long of The Associated Press.