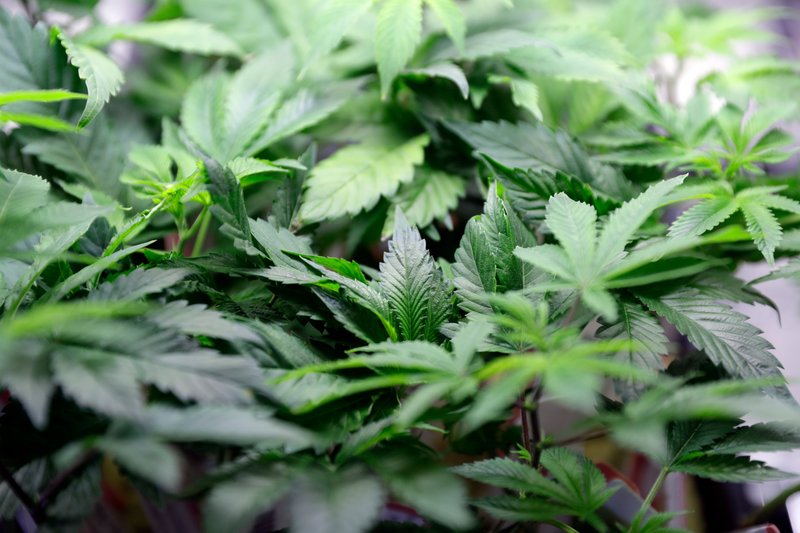 FILE - In this Feb. 14, 2018, file photo, marijuana plants are displayed at a dispensary in Berkeley, Calif. U.S. health officials say a closely watched medicine made from the marijuana plant significantly reduces seizures in children with severe forms of epilepsy and warrants approval in the U.S. The Food and Drug Administration posted its review Tuesday, April 17, of the experimental medication ahead of a public meeting later this week. (AP Photo/Marcio Jose Sanchez, File)

The Arkansas Supreme Court on Thursday freed the state to license its first legal medical marijuana growers, reversing a lower court's ruling that stalled the process.

The high court ruled that Pulaski County Circuit Judge Wendell Griffen didn't have the authority to halt the implementation of Arkansas' medical-cannabis program in March. The court reversed and dismissed the lawsuit, which it said was filed too soon.

The decision allows the Arkansas Medical Marijuana Commission to award growing permits to the top five applicants, but numerous allegations and issues with the commission's scoring system looms over that process.

The court didn't opine on those issues, many of which were raised in court pleadings and Griffen's order, but Chief Justice John Dan Kemp hinted that they didn't go unnoticed.

"I urge the [commission] to review its rules and procedures and to cure any deficiencies," Kemp wrote in a brief concurrence.

The five-member commission was created by Amendment 98 to the Arkansas Constitution, which Arkansans approved in 2016 to legalize marijuana for medicinal use and to license cultivation facilities to grow and dispensaries to sell the drug, which must be grown in the state.

A spokesman for the commission said Thursday that it would wait two weeks for the court's ruling to become final before taking any action.

"At that point, the Medical Marijuana Commission, with the ability to continue any action that was underway or scheduled prior to the injunction, will announce the next steps in this process," said Scott Hardin, a spokesman for the state Department of Finance and Administration, which provides administrative support to the commission.

Commissioners announced the five cannabis cultivation license winners at a meeting on Feb. 27, and it gave those companies a week to post the required $500,000 performance bond and pay the $100,000 licensing fee before formally issuing the permits.

In that week, a pair of applicants that scored outside the top five sued the commission, alleging problems with scoring process. Griffen entered a temporary restraining order barring the awarding of growing permits on March 14 just hours before the commission was scheduled to meet and issue those licenses.

A week later, Griffen sided with Naturalis Health -- one of the unsuccessful applicants that sued -- declaring the commission's licensing decisions "null and void." Griffen ruled that the scoring process was unconstitutional because regulators failed to verify that all applicants complied with key requirements. He also ruled that the process suffered from the appearance of bias because of two commissioners' business and personal relationships with the owners of two top-scoring companies.

Issues with the scoring process continued to surface in media reports after the state appealed Griffen's order to the state Supreme Court. Questions were raised about whether some of those behind the successful cultivation companies lied about their Arkansas residencies in their applications; the commissioners used different scoring rubrics when evaluating the applications; and at least one company was disqualified from consideration for the same error found in a winning application.

One commissioner also told authorities that an unsuccessful cultivation-license applicant attempted to bribe him, but the commissioner said he declined the offer, according to a letter Attorney General Leslie Rutledge sent to the high court. That company -- Natural State Agronomics -- has denied the alleged bribe attempt, and a law enforcement investigation into the matter is underway.

An attorney for Naturalis said the company disagrees with but respects the Supreme Court's ruling, and the company is considering its next steps.

Several of the groups that stand to receive licenses welcomed the decision, pledging to make cannabis available as soon as practical.

"We look forward to resuming our efforts to cultivate medical marijuana and serve the citizens of Arkansas who qualify for, are entitled to, and are in need of its use," said Don Parker, a spokesman for Delta Medical Cannabis Co. of Newport.

Gov. Asa Hutchinson said he was pleased with the court's unanimous decision, which he added recognized the judiciary's limited role in reviewing discretionary executive branch decisions.

"The action of the Supreme Court sets the stage for the cultivation licenses to be issued," he said in a written statement. "As to any future rule changes, that is a matter still under review and will ultimately need to be considered by the Commission."

Future challenges to the licensing process are imminent, according to attorneys and industry insiders interviewed Thursday. A handful of protest letters raising concerns with the scoring process have already been sent to the commission with more expected in the coming days.

Thursday's ruling concluded that the unsuccessful applicants sued prematurely, and the judicial branch shouldn't involve itself in executive branch matters until all other avenues of administrative relief have been exhausted.

"Our constitution divides our state government into three branches and states that no branch 'shall exercise any power belonging to either of the others,'" Justice Rhonda Wood wrote for the court. "This is foundational to our government. The judicial branch must not abdicate this by reviewing the day-to-day actions of the executive branch."

Wood noted, however, that administrative agency decisions may be subject to judicial review in some cases governed by the Administrative Procedure Act. That law gives the courts jurisdiction to review agency decisions that come after a "quasi-judicial" proceeding, which usually includes testimony, findings of fact, presentation of evidence, a certified record and a final agency determination.

The Medical Marijuana Commission's rules are clear that those denied a license can appeal to circuit court under the Administrative Procedure Act, but the commission's rules fail to provide any process that would constitute a quasi-judicial proceeding.

A protest letter sent to the commission on Thursday noted the disconnect.

"The Commission's rules provided for a right to appeal but failed to provide an appropriate route for any party to object and make a record," wrote Erik Danielson, an attorney for applicant Arkansas Medicinal Source. "It is the flawed procedure or lack thereof described above that caused this whole problem and we protest it, object to it, and at a minimum request proper notice and a hearing before any applications are granted or denied for all the reasons set out above."

The letter closed by calling for the applications to be re-scored by an "independent third party" because "the numerous discrepancies and problems already identified with the licensing process, the people of Arkansas have lost confidence and trust in the process."

Some attorneys within the medical-marijuana community suspect that the commission's discussion and making of a determination on the protest letters at a public meeting could meet the threshold for a quasi-judicial adjudication, but even those attorneys concede that it's unclear if the theory would meet the high court's muster.

One thing the lawyers do agree on is that the marijuana commission will soon be sued again, likely over the same complaints Naturalis lodged, and patient advocates fear further delays.

Kemp, in his concurrence, left a crack for future court intervention.

"The court may, however, reverse an agency decision if the substantial rights of the petitioner have been prejudiced because the administrative findings, inferences, conclusions, or decisions are in violation of constitutional provisions or made upon unlawful procedure," he wrote.

David Couch, the Little Rock attorney who drafted Amendment 98, suggested on Thursday that the commission should re-evaluate its licensing process and adopt a lottery-style system. Under that proposal, applicants that meet a minimum set of requirements would be entered into a random drawing for the five growing licenses.

Under the commission's current rules, the applicants were evaluated based on a merit-scoring system by commissioners.

Couch also encouraged the commission to move forward with its evaluation of the 227 applications for dispensaries, which can grow a limited amount of medical cannabis.

"Get those things up and running so they can get some product out to the patients ASAP," Couch said.

Couch also noted the fact that has frustrated patients -- Arkansas legalized medical marijuana 591 days ago, yet still no seeds have been planted.