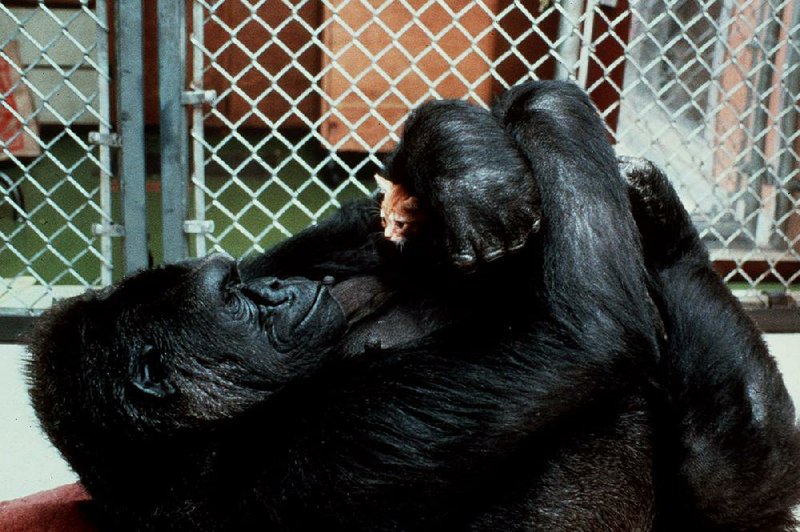 Koko the gorilla plays with a kitten in April 1985. Koko’s sign-language skills, while questioned by some, led to films, books, encounters with celebrities and “changed the image of apes, and gorillas in particular, for the better,” Emory University primate researcher Frans de Waal said.

SAN FRANCISCO -- Koko the gorilla, whose remarkable sign-language ability and motherly attachment to pet cats helped change the world's views about the intelligence of animals and their capacity for empathy, has died at 46.

Koko was taught sign language from an early age as a scientific test subject and eventually learned more than 1,000 words, a vocabulary similar to that of a human toddler.

She became a celebrity who played with the likes of William Shatner, Sting, Leonardo DiCaprio, Robin Williams and Mr. Rogers. At her home preserve, where she was treated like a queen, she ran around with Williams' eyeglasses and unzipped Rogers' famous cardigan sweater.

In so doing, Koko showed the American public that a giant ape didn't have to be scary but wanted to be tickled and hugged.

The Gorilla Foundation said the 280-pound western lowland gorilla died in her sleep at the foundation's preserve in California's Santa Cruz mountains Tuesday.

Koko was not the first animal to learn sign language and communicate, but through books and media appearances she became the most famous. Yet there was debate in the scientific community about how deep and humanlike her conversations were.

"Koko the individual was supersmart, like all the apes, and also sensitive, something not everyone expected from a 'king kong' type animal that movies depict as dangerous and formidable," Emory University primate researcher Frans de Waal said in an email Thursday.

"It changed the image of apes, and gorillas in particular, for the better, such as through the children's book Koko's Kitten that many young people have grown up reading. To view apes as nice and caring was new to the public and a big improvement."

Koko watched movies and television, with her handlers saying her favorite book was The Three Little Kittens, her favorite movies included the Eddie Murphy version of Doctor Doolittle and Free Willy, and her favorite TV show was Wild Kingdom.

For her 25th birthday, she asked for and received a box of rubber snakes. In 1996, she even asked to be a mother. Despite attempts by her keepers to introduce male partners, Koko never became a mother. Instead, she had a series of kittens as pets.

The first was named All Ball, a gray and white tail-less kitten, given to Koko for her birthday in 1984. Other cats followed after All Ball's death, but researchers reported that the gorilla kept "mourning" the original cat years later.

Koko's real name was Hanabi-Ko, Japanese for fireworks child. She was born July 4, 1971, at the San Francisco Zoo.

Francine Patterson was working on her doctoral dissertation on the linguistic capabilities of gorillas and in 1972 started to teach Koko sign language. Patterson and biologist Ronald Cohn moved Koko to their newly established preserve in 1974 and kept teaching and studying her, adding a male gorilla in 1979.

In 2004, Koko used American Sign Language to communicate that her mouth hurt and used a pain scale of 1 to 10 to show how badly it hurt.

"Koko represents what language may have been 5 million years ago for people," Cohn said in 1996. "That's the time that gorillas and humans separated in evolution."

Other scientists, such as Herbert Terrace at Columbia University, who raised and taught sign language to a primate named Nim Chimpksy -- a play on the name of the linguist Noam Chomsky -- argued in scientific and popular literature that most of Koko's conversations and those of other primates were "not spontaneous but solicited by questions from her teachers and companions."

"Scientists have often complained about possible overinterpretation of Koko's sign language utterances and the lack of proper documentation of what she has said when and how," de Waal said in an email, adding that "coaching and interpretation by the people around her" may have altered her messages at times.

But the science, de Waal said, was "irrelevant to Koko's pop-image. ... Koko's passing is the end of an era, and a genuine loss."

Koko frequently asked to see people's nipples, a habit that led to controversy more than a dozen years ago, when two former caretakers said they were fired for refusing to bare their breasts to the gorilla. The women settled with the foundation in 2005.

Williams, another San Francisco Bay area legend, met Koko in 2001 and called it a "mind-altering experience." The two held hands and tickled each other in a widely shared video.

"We shared something extraordinary: Laughter," he said. He called it "awesome and unforgettable."