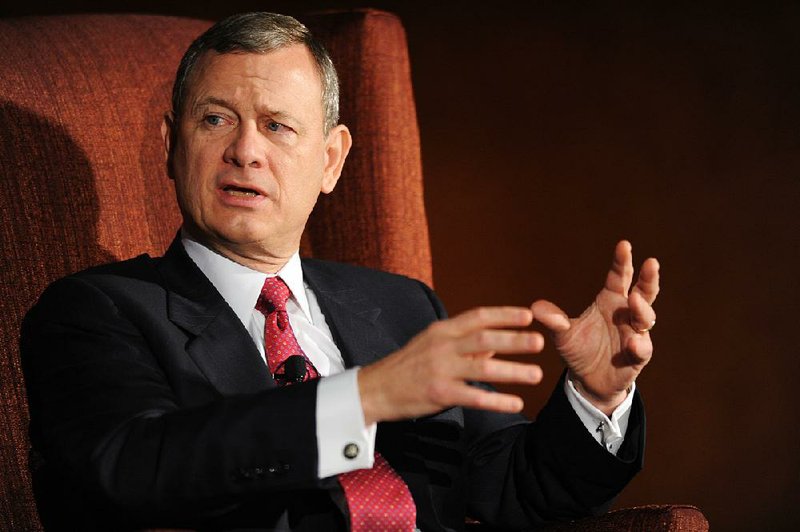 John Roberts, chief justice of the U.S. Supreme Court,is shown in this May 4, 2016 file photo.

WASHINGTON -- In a major statement on privacy in the digital age, the Supreme Court ruled Friday that the government generally needs a warrant to collect troves of location data about the customers of cellphone companies.

"We decline to grant the state unrestricted access to a wireless carrier's database of physical location information," Chief Justice John Roberts wrote for the majority in the 5-4 decision.

The ruling will protect "deeply revealing" records associated with 400 million devices, the chief justice wrote. It did not matter, he wrote, that the records were in the hands of a third party. That aspect of the ruling was a significant break from earlier decisions.

The Constitution must take account of vast technological changes, Roberts wrote, noting that digital data can provide a comprehensive, detailed -- and intrusive -- overview of private activities that would have been impossible to imagine not long ago.

Friday's decision made exceptions for emergencies like bomb threats and child abductions. "Such exigencies," he wrote, "include the need to pursue a fleeing suspect, protect individuals who are threatened with imminent harm or prevent the imminent destruction of evidence."

In general, though, authorities must now seek a warrant for cell tower location information and, the logic of the decision suggests, other kinds of digital data that provide a detailed look at a person's private life.

The decision thus has implications for all kinds of personal information held by third parties, including email and text messages, Internet searches, and bank and credit card records. But Roberts said the ruling had limits.

"We hold only that a warrant is required in the rare case where the suspect has a legitimate privacy interest in records held by a third party," the chief justice wrote. The court's four more liberal members -- Justices Ruth Bader Ginsburg, Stephen Breyer, Sonia Sotomayor and Elena Kagan -- joined his opinion.

Each of the four other justices wrote a dissent, with the five opinions running more than 110 pages. In one dissent, Justice Anthony Kennedy said the distinctions drawn by the majority were illogical and "will frustrate principled application of the Fourth Amendment in many routine yet vital law enforcement operations."

"Cell-site records," he wrote, "are uniquely suited to help the government develop probable cause to apprehend some of the nation's most dangerous criminals: serial killers, rapists, arsonists, robbers, and so forth."

In a second dissent, Justice Samuel Alito wrote that the decision "guarantees a blizzard of litigation while threatening many legitimate and valuable investigative practices upon which law enforcement has rightfully come to rely."

The case, Carpenter v. United States, No. 16-402, arose from armed robberies of Radio Shacks and other stores in the Detroit area starting in 2010.

Witnesses said that Timothy Ivory Carpenter had planned the robberies, supplied guns and served as lookout, typically waiting in a stolen car across the street.

"At his signal, the robbers entered the store, brandished their guns, herded customers and employees to the back, and ordered the employees to fill the robbers' bags with new smartphones," a court decision said, summarizing the evidence against him.

Prosecutors also relied on months of records obtained from cellphone companies to prove their case. The records showed that Carpenter's phone had been nearby when several of the robberies happened. He was convicted and sentenced to 116 years in prison.

Investigators obtained the records with a court order that requires a lower standard than the "probable cause" needed for a warrant. "Probable cause" requires strong evidence that a person has committed a crime.

The judge at Carpenter's trial refused to suppress the records, finding no warrant was needed, and a federal appeals court agreed. President Donald Trump's administration said the lower court decisions should be upheld.

The administration relied in part on a 1979 Supreme Court decision that treated phone records differently than the conversation in a phone call, for which a warrant generally is required.

Carpenter's lawyers said cellphone companies had turned over 127 days of records that placed his phone at 12,898 locations, based on information from cellphone towers. The records disclosed whether he had slept at home on given nights and whether he attended his usual church on Sunday mornings.

Roberts wrote that the information was entitled to privacy protection.

"Mapping a cellphone's location over the course of 127 days provides an all-encompassing record of the holder's whereabouts," he wrote, going on to quote from an earlier opinion. "As with GPS information, the time-stamped data provides an intimate window into a person's life, revealing not only his particular movements, but through them his 'familial, political, professional, religious and sexual associations.'"

"As the number of cell sites has proliferated," he wrote, "the geographic area covered by each cell sector has shrunk, particularly in urban areas. In addition, with new technology measuring the time and angle of signals hitting their towers, wireless carriers already have the capability to pinpoint a phone's location within 50 meters."

Roberts left open the question of whether limited government requests for location data required a warrant. But he said access to seven days of data is enough to raise Fourth Amendment concerns.

The legal question for the justices was whether prosecutors violated the Fourth Amendment, which bars unreasonable searches, by collecting without warrant vast amounts of data from cellphone companies that showed Carpenter's movements.

In a pair of recent decisions, the Supreme Court expressed discomfort with allowing unlimited government access to digital data. In United States v. Jones, it limited the ability of police to use GPS devices to track suspects' movements. And in Riley v. California, it required a warrant to search cellphones.

Roberts wrote that both decisions supported the result in the new case.

As his opinion in Riley pointed out, he wrote, "cellphones and the services they provide are 'such a pervasive and insistent part of daily life' that carrying one is indispensable to participation in modern society."

And the Jones decision, he wrote, addressed digital privacy in the context of location information.

"The question we confront today," he wrote, "is how to apply the Fourth Amendment to a new phenomenon: the ability to chronicle a person's past movements through the record of his cellphone signals. Such tracking partakes of many of the qualities of the GPS monitoring we considered in Jones. Much like GPS tracking of a vehicle, cellphone location information is detailed, encyclopedic and effortlessly compiled."

"This is a groundbreaking victory for Americans' privacy rights in the digital age. The Supreme Court has given privacy law an update that it has badly needed for many years, finally bringing it in line with the realities of modern life," said ACLU attorney Nathan Freed Wessler, who argued the Supreme Court case in November.

In the past, the court has drawn a sharp distinction between what is private under the law and what is not. For example, talking on a phone is considered private, so police must obtain a search warrant before they may "wiretap" or otherwise listen to a call. However, the dialing records of phone calls were considered a business record and not private, so police may obtain these records directly from a phone company.

A federal law, the Stored Communications Act, does require prosecutors to go to court to obtain tracking data, but the showing they must make under the law is not probable cause, the standard for a warrant. Instead, they must demonstrate only that there were "specific and articulable facts showing that there are reasonable grounds to believe" that the records sought "are relevant and material to an ongoing criminal investigation."

That was insufficient, the court ruled. But Roberts emphasized the limits of the decision. It did not address real-time cell tower data, he wrote, "or call into question conventional surveillance techniques and tools, such as security cameras."

"Nor do we address other business records that might incidentally reveal location information," the chief justice wrote. "Further, our opinion does not consider other collection techniques involving foreign affairs or national security."

Information for this article was contributed by Adam Liptak of The New York Times; by Mark Sherman of The Associated Press; and by David G. Savage of the Los Angeles Times.