5 great bream lures and how to use them 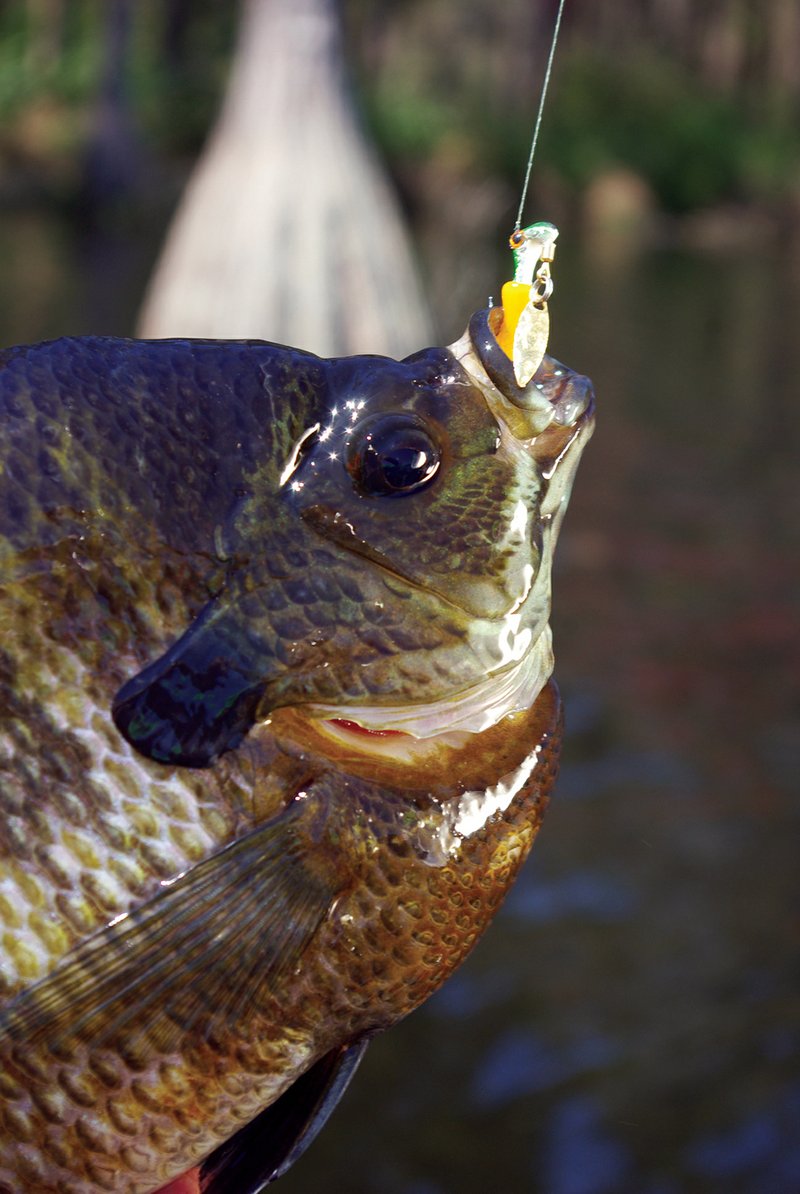 Most bluegill anglers are natural bait aficionados, but big bream are easily enticed using a variety of artificial lures as well, like the spinner that nailed this whopper.

When Arkansans go fishing for bluegills and other bream, it’s a good bet you’ll find live crickets or worms at the end of their lines. These two natural baits have long been considered the best enticements to use when you’re hoping to catch a mess of bream for your next fish fry.

If you prefer fishing with artificial lures, however, you’re in luck. Tiny lures that imitate the little bugs, worms and other invertebrates bluegills love to eat are more widely available than ever, and anglers should have no problem finding reasonably priced rods, reels and tough ultralight lines that are just right for casting and retrieving these minuscule offerings.

Here are five of the lures that work best and a few tips for fishing them properly when targeting bluegills and other bream.

When we think of fly-fishing, trout often come to mind. But the same fly-fishing lures used to coax a rainbow or brown trout to bite often work great on big sunfish, too.

If those sunfish happen to be on their shallow-water spawning beds, popping bugs, sponge-rubber spiders and surface flies are among the best fly-fishing lures to try. Try to pick those that resemble natural forage such as mayflies and other insects. Then cast the lure, and let it sit for a minute or two with just an occasional twitch. The idea is to mimic a nonaquatic animal that has fallen into the water. If the animal moves, it’s going to sink, so most move very little. Lures worked too fast or aggressively make the fish wonder if they should really be eaten.

When bream have stopped spawning and are holding in deeper water, nymphs and wet flies are favored by many fly fishermen. To reach big bluegills that are 4 to 12 feet below the surface, for example, anglers often use a 10-foot, sinking-tip line attached to their standard floating fly line. Sometimes the lure is allowed to drift down very slowly. Other times, it’s allowed to sit motionless right on the bottom. Slowly twitching the lure through the water can also be effective.

Jigs small enough to fit in bluegills’ tiny mouths are great bream-catchers, too. The best usually have 1/100- to 1/32-ounce heads and

1/2- to 1-inch bodies, but you’ll still have to select from the thousands of styles and colors available. Almost all will catch bluegills, so try several varieties until you have some favorites. Those favorites — the ones you develop confidence in — are the ones you should use most often.

Jigs are especially useful when fishing for bream in dense, shallow-water cover such as willows or beds of water lilies. In this situation, employ a vertical jigging technique using a long jig pole equipped with a small reel or line holder. This rig gives you extra reach for getting back in the brush where most anglers never fish. It also allows you to reel in excess line to weave the jig into thickets. Then by releasing line from the spool, the jig drops into pockets of cover where big bluegills await.

Use a tube, hair or marabou jig so little movements will give the lure action. These jigs move seductively, even when held as stationary as possible. When tying the jig, pull the knot to the top of the eyelet so the lure rides perpendicular to the line.

Position the jig over a clear spot in the cover; then slowly lower the jig. Gradually go deeper until you find a fish. If no strikes are forthcoming, pull the jig out, and move to the next spot. Hit multiple locales, and when you locate bluegills, work the area thoroughly for schooling fish.

My favorite bluegills jigs are those with hair bodies, especially squirrel-hair jigs. Bluegills find them irresistible, and tiny hair jigs weighing just 1/100 to 1/48 ounce tend to be real killers.

I usually fish hair jigs without bait, relying on rod-tip movement to give the lure life. But when the bite is slow, adding a waxworm or redworm adds attraction that may turn fish on. Using a sensitive slip float above the jig gives extra casting distance and helps detect soft-biting ’gills.

Floating plugs are great for nabbing bluegills, too. Several lure manufacturers have extensive lines of 1- to 2-inch minis that closely resemble natural bream foods such as small crayfish, tiny shad and grasshoppers.

Perhaps the best way to tempt big bluegills with these plugs is to cast the lure to a likely hot spot; then let the lure sit with only an occasional twitch to ripple the water’s surface. A hungry sunfish, if one is near, will soon rush in to strike.

Many bream aficionados swear by the variety of teeny plugs made by Fort Smith-based Rebel Lures. Among them are the Crickhopper, Hellgrammite and Bumble Bug, all of which can be found at www.lurenet.com.

Small spinners with rotating blades are among my favorite bluegill lures as well. These work best where the water is open and snag-free, in spots like gravel-bottom spawning beds and long rocky points. But if you use the correct technique, spinners can also be fished over weed tops, in sparse brush and alongside woody cover such as stumps and trees.

Position your boat so you can cast and retrieve along the edge of cover, and work the spinner very slowly. Bluegills like to inspect a meal before gobbling it up, so you don’t want the lure to move too fast, or it may be ignored.

Spinners come in three basic types. In-line spinners like the Mepps and Rooster Tail have a spinner that revolves around a heavy-wire shaft. Safety-spinners are more like those commonly used for bass fishing, except smaller. These have the spinner blade at the end of a wire arm. The third type is the horsehead spinner, which has a small blade attached directly to the jig head. Blakemore Road Runners are among the most familiar in this group.

When fishing spinners, the key concern is again choosing the right size. Too big, and dimple-mouthed bluegills won’t be able to inhale it, even though they may try. Stick to small versions. Always fish the spinners slow, but they work great in deep water or shallow and can be presented by casting, jigging or trolling.

You may also want to check out some of the amazingly lifelike soft-plastic lures now available for bream fans. Created from molds of real creatures, these durable artificials closely resemble crickets, grasshoppers, worms, crayfish, shrimp, spiders, grubs, nymphs and other bluegill favorites. The soft plastic has a texture like real food, so fish may mouth these lures longer than hard artificials, giving extra time to set the hook. Some come unrigged and are threaded on hooks or fished on lead-head jigs. Others have a hook molded into the plastic.

An excellent way to fish soft plastics is to attach a clear-plastic casting bubble 12 to 18 inches above the lure to gain extra casting distance. A water-filled bubble sinks at about a foot a second. Count down to a depth where the lure brushes the tops of aquatic weeds or brush, then retrieve very slowly, with an occasional twitch to entice hungry sunnies.