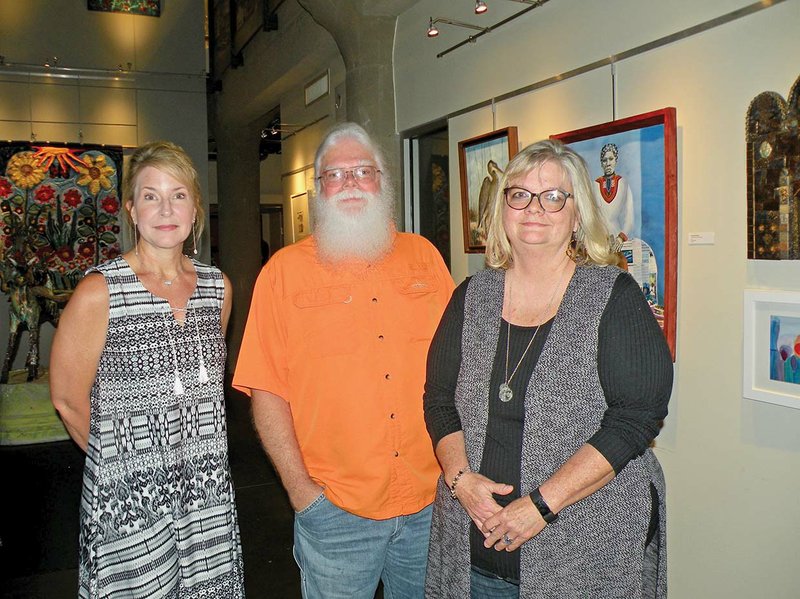 Several local artists have work in the 2018 Delta des Refusés exhibit on display in Little Rock. Among those attending the opening-night reception June 8 in the Underground Gallery of the Butler Center for Arkansas Studies are Debra Caldwell, from left, David Paul McGhee and Jo Lynne Varner.

The exhibition will be open through Aug. 25 in the Underground Gallery of the Butler Center for Arkansas Studies and in the Third Floor Gallery of the River Market Books and Gifts store in the Cox Creative Center.

The public is invited to opening receptions from 5-8 p.m. July 12 and Aug. 10 at both locations, coinciding with 2nd Friday Art walks; many of the local artists plan to attend.

“The Delta des Refusés was started in 2015 and is scheduled to coincide with the Delta Exhibition,” said Trusty, who teaches art at the University of Arkansas Community College at Morrilton.

“The 2018 Delta des Refusés is the largest show in the exhibition’s history, with 105 artists from three states participating.

“Conceived in the spirit of the original Paris Salon des Refusés from 1863, the Delta des Refusés hopes to challenge the traditional authority of juried taste by allowing any artist who was rejected from the Delta Exhibition to exhibit in the show,” Trusty said.

Following is a look at the local artists with works in the 2018 Delta des Refusés:

Debra Caldwell, who lives in Benton, calls her oil-on-canvas painting The Tie That Binds.

“This painting depicts the three greatest loves of my life — my two sons, Kaleb and Nic Murray, and my husband, Brooks Caldwell, reaching for or taking hold of a pink rope, which represents me,” she said. “The setting is on a river that runs behind my home. My children grew up spending countless hours exploring and fishing this river. It symbolically represents the shared life experiences, the ever-changing roles of love and support that we play for one another, and the steadfast flow of love between us.”

Debra Caldwell has been a secondary public-school art teacher for 22 years, working with high school students at both Parkview Arts and Science Magnet School and Bryant High School. In 2016, she helped open Pinnacle View Middle School in Little Rock.

“Because the Arkansas Arts Center is such a valuable asset to our state and local community, I have chosen to show my support by entering the Delta Exhibition on multiple occasions; however, I have always had my work refused. I was so pleased to find a viable alternative in sharing my work though the Delta des Refusés.”

“It’s a real guitar,” he said, laughing. “I painted a sugar skull on it. A sugar skull is a colorful design on a skull used in the Day of the Dead celebrations in Mexico from Oct. 31

to Nov. 1. They make actual skulls out of sugar and color them with bright designs.

“I have entered and been rejected from the Delta Exhibition in the past and again this year,” McGhee said.

“I don’t seem to be able to understand what they are looking for,” he said. “But no worries this year because I was looking forward to being able to display my sugar-skull guitar there or at the Delta des Refusés, which I am very pleased to be in this year.”

McGhee was born in Lynwood, California, but moved to the North Little Rock/Sherwood area in the early 1960s, where he lived until a year ago, when he moved to Benton.

“I was a computer mainframe system programmer/network engineer for my trade from 1977 to 2015, when I retired,” he said. “I worked on everything from PCs and dial-up to multimillion-dollar mainframe computers and 10-gig fiber rings. I was at Dillard’s for 25 of those years.

“I learned to paint from watching Bob Ross [on the Arkansas Education Television Network] and have been doing so since 1991,” McGhee said. “It was always a nice change from the high-tech world of computers and networks. I also wrote a sci-fi/mystery novel called Messin’ Around just to see if I could.”

Pat Ulrich, who lives near Paron, calls her artwork Vigil.

“I entered the Delta Exhibition this year and was rejected,” she said, laughing. “This is the first time I have ever entered any kind of exhibition.

“It is a printmaking piece,” she said. “I used the traditional CMYK (cyan, magenta, yellow and key) model to make the print, which I printed on my laser printer.

“It is on display in the Cox Center,” she said.

“I like being in the Delta des Refusés,” she said. “It’s a nice way for more local artists to get their works shown.”

Ulrich has a background in graphic design. She holds a Bachelor of Arts degree from the University of Arkansas at Little Rock, where she majored in graphic design and illustration and minored in advertising and marketing. She is currently the business analyst at the Arkansas Arts Center.

“It means ‘blue forest’ in Spanish,” Varner said, explaining the title of her work. “I actually had a friend from Argentina on my mind while I worked on it. I decided to keep the title simple and in Spanish as a reference to my friend.

“It was one of my first pieces incorporating various inks and watercolors together,” she said. “It has some shadowing and blending done in pastel chalk pencils. It’s a piece I started by dropping some paint and letting it blend on wet paper … just trying to see what the pigment wanted to do on its own. It’s sort of a dark piece — darker than most of my work — with a symbolic pop of light centered among the cloudy sky and dark tones. Maybe I was feeling blue that day. Who knows?”

Varner grew up on her family’s farm in southwest Arkansas but has lived in Benton for almost 35 years and has worked in health care for about that long. For the past 14 years, she has been the practice administrator at the Little Rock Pediatric Clinic.

“Between that and my family duties, it’s a challenge to find time for my art, but it’s also what relaxes me and nourishes my creative side,” Varner said. “I did watercolor several years ago and then pretty much stopped until a couple of years ago. I made myself enroll in a class at the Arkansas Arts Center, mainly to force some protected time within a creative space to get back into it. In terms of media, right now I’m playing with a lot of ink and really enjoying the intense colors and how well it lends itself to abstract designs. The piece in the show is actually a combination of watercolor and ink.

“I entered the Delta Exhibition this year knowing full well there was likely no chance of getting in,” she said. “But I think it’s important for people to put themselves out there, especially when it also supports the local arts community. Only by sustained participation will the arts continue to thrive.

“I love that this show is happening,” Varner said. “It gives so many people a chance to show work that otherwise may not have been seen in a public space. I also love the historical reference to the 1863 exhibit in Paris of artwork that had been rejected from the prestigious juried exhibition.”

“Beginning next fall, I will move to teaching online at UACCM,” she said. “This fall I will begin a graduate program at the University of Kansas in Women, Gender and Sexuality Studies. My Master of Fine Arts degree focused on feminist art, and this program will allow me to continue my research.

“I still plan to organize my three annual shows here in Arkansas,” she said. “Along with the Delta des Refusés, I also organize a fiber-arts exhibition for Arkansas artists. That will occur this fall at the main branch of the Laman

Library in North Little Rock. I also organize a political show, which occurs yearly on the anniversary of the inauguration. This year’s show will be called Two Years Down and will be at the New Deal Gallery in Little Rock in January 2019.”

For more information on the 2018 Delta des Refusés, visit the website www.deltadesrefuses.com.