Assaults in Arkansas prisons slow to come out; lid kept on what news goes public 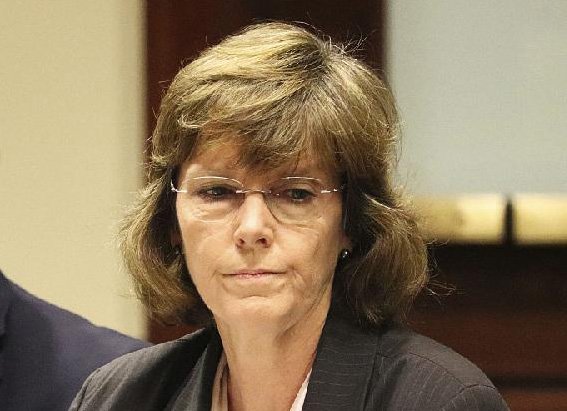 Corrections Secretary Wendy Kelley is shown in this 2017 file photo.

At least two prisoners at Arkansas' Cummins Unit, the state's largest prison, last September saw a pool of blood spread across the bathroom floor under the head of James Walker, a 34-year-old inmate.

They would later tell an investigator with the Arkansas State Police that they had seen Damont Ewells, also an inmate, punch Walker, causing the latter to fall to the ground and hit his head.

Walker was rushed to the hospital, where he died the next day.

For months, prison and police officials, despite having accounts from the pair of witnesses, did not say that they believed Walker's death was a homicide. Like other investigations into crimes committed at state prisons, pertinent details have come out only as prosecutors have decided to file charges.

While Walker's death was reported in the media at the time, officials said they could not determine whether the inmate's injury was the result of a fall or an assault.

No public statement was ever released by the prison or state police calling Walker's death a homicide, even after Ewells was charged with manslaughter in December.

The attack on Sept. 19 was part of a spate of violence at several state prisons last year in which prison officials released little information, saying they were investigating the incidents. They also said the prison system was strained with too many inmates and too few staffers.

Now, months later, more details have been disclosed in police records and court documents as prosecutors have filed criminal charges against more than a dozen inmates accused of being involved in outbreaks of prison violence.

The court records describe assaults on guards and on other inmates, as well as three incidents at a pair of prisons where inmates managed to release their fellow prisoners into areas where they threatened staff members.

Speaking to lawmakers earlier this month, Department of Correction Director Wendy Kelley said pay increases at the most chronically understaffed prisons have helped ease the system's problem with job vacancies, and that violence in prisons is on the decline.

But at that same meeting, family members of prisoners complained about inmates' poor medical care and a lack of transparency that made it hard to stay informed about their loved ones behind bars.

Asked by a reporter why no follow-up statement was released announcing that Walker's death was believed to be the result of an attack, prison spokesman Solomon Graves said in an email last month that department policy restricts his office to confirming only whether an inmate's death is attributed to natural causes. The exceptions are cases of suicide or execution.

The department also does not release results of many of its own internal investigations into nonlethal instances of violence, saying those reports constitute an "inmate record" that is exempt from the state's Freedom of Information Act, under Arkansas Code Annotated 12-27-113.

Information regarding criminal charges, Graves said, are the responsibility of the Arkansas State Police or prosecutors investigating crime within prisons.

State police spokesman Bill Sadler on Friday said it was entirely up to local prosecutors to make an announcement when they elect to file charges.

Such policies delegate the public notification duties of the Department of Correction -- which is responsible for the direct care of around 16,000 state prisoners -- to prosecutors in the 11 separate judicial districts where prisons are located.

Kelley has asked lawmakers for the funds to hire a single statewide prosecutor to decide whether to file charges in cases of crimes in prisons, but that money was left out of the department's most recent budget.

Kyle Hunter, the prosecuting attorney in the 11th Judicial District-West, where about a third of the state's prison population is housed, provided the publicly accessible court documents for several cases after a records request was filed by the Arkansas Democrat-Gazette.

Walker's father, Huey Kinsey, said in an interview that he struggled to get information after his son's death. His son was serving an 85-year sentence for a bank robbery in Greenbrier.

"It was a lot of stuff that no one would even tell us," Kinsey said in a phone conversation last week from Orlando, Fla., where he lives. "The warden wouldn't even talk with us."

After being met with silence from prison officials, Kinsey said he was finally filled in on the details of his son's death by an inmate who reached out to him through text.

Cellphones are banned in Arkansas' prisons, but officials have conceded that they have been unable to stem the flow of contraband phones, which they say can contribute to violence.

Graves said department policy forbids unit staff members, other than a chaplain, from sharing information with anyone regarding the death of an inmate. Kinsey said he spoke with a unit chaplain twice but wasn't told much other than that his son had been rushed to the hospital.

"The guys [at Cummins] told me what happened, but no one in the prison told me," Kinsey said. When the charges were filed against Ewells in December, Kinsey said he was contacted by the prosecuting attorney's office.

Ewells, a 45-year-old habitual offender, has since been relocated to Varner Supermax, and his jury trial on manslaughter charges has been delayed pending a psychiatric evaluation.

When state police investigators went to examine the scene later on the day of the attack, they found "that the area had been cleaned of all physical evidence."

Asked why the scene was not secured, Graves noted that the area was in an open barracks housing 82 inmates.

"Initially, there was no indication of an altercation, and it was suspected that Walker had fallen and hit his head in the bathroom," Graves said.

Walker's personal property was secured and given to state police officers, Graves said.

In another disturbance, this time at the Tucker Maximum Security Unit on Nov. 24, prison officials reported that two officers had been taken hostage but escaped with only "minor lacerations" and were released from the hospital later that night.

Over the several days after that attack, a spokesman and attorney for the Department of Correction denied public records requests for communications made by the prison's warden during the disturbance. Such records had, in the past, been used by reporters to uncover details about other outbreaks of violence.

The spokesman and the attorney made no mention of the "metal shank" that an inmate held as he rushed at officers, or that the officers were tied to each other and locked in a cell where their attackers kicked and stabbed them, as was stated in police reports released later.

Those reports, released months later after two inmates were charged in the attack, stated that each of the officers "received several stab wounds in the torso, and some to the face."

Neither of the officers responded to requests for comment.

Two inmates, Quvondo Thrower and Christopher Brewer, have been charged with kidnapping, battery, furnishing prohibited articles and terroristic threatening, according to court records. Both are now housed in Varner Supermax and are awaiting trial.

In two earlier instances at the Tucker Max Unit, inmates were able to attack officers and grab their keys, allowing the inmates to release other prisoners and assault others.

On Aug. 7, two inmates who police said were also involved in a July 22 disturbance -- Larry Pitchford and Jordan Williams -- again were able to overpower officers by wielding broom and mop handles, according to a police report.

After locking two guards in a cell, they assaulted another guard and with the help of a third inmate, Jimmy Jacobs, were able to release four other inmates from isolation cells, police said. The group of inmates later surrendered and agreed to be bused to the Varner Unit.

Both of the incidents were publicly reported by the Department of Correction and the media at the time. In the July 22 incident, Pitchford, Williams and fellow prisoner Antoine Simmons were charged with second-degree battery and inciting a riot.

After a similar incident at the Cummins Unit on Sept. 14, three inmates were charged with inciting a riot: Javious Hughes, Trayvan Ticey and Herson Santos. According to a police affidavit, $18,631 in damage was caused after the trio broke windows in the barracks and a control booth, before Santos opened the door to the entire barracks.

The affidavit states: "The officers working that area had to flee for their safety on the other side of a riot gate and an environmental wall." Hughes was also charged with battery after reportedly striking an officer to begin the incident.

The Department of Correction at the time said three inmates had been injured in the disturbance, and windows and surveillance equipment were damaged. 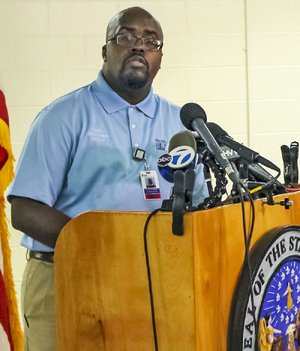 Photo by Arkansas Democrat-Gazette
Prison spokesman Solomon Graves is shown in this photo.

Print Headline: Assaults in prison slow to come out; Lid kept on what news goes public