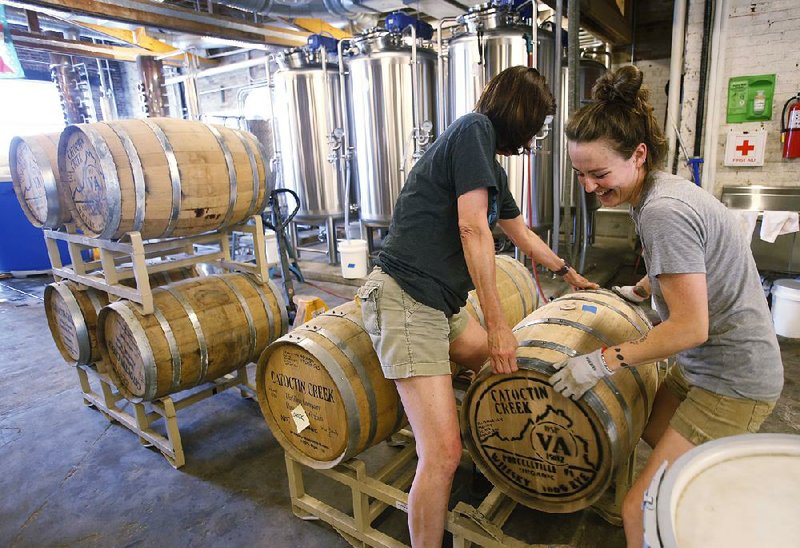 Becky Harris (left) and Addie Rodgers move a barrel of whiskey at Catoctin Creek Distillery in Purcellville, Va. which has been cultivating a European clientele.

LOUISVILLE, Ky. -- Much of the rye whiskey aging in hundreds of barrels at Catoctin Creek Distillery in Virginia could end up being consumed in Europe, a market the 9-year-old distilling company has cultivated at considerable cost.

But an escalating trade dispute has the distillery's co-founder and general manager, Scott Harris, worried those European sales could evaporate as tariffs drive up the price of his whiskey in markets where consumers have plenty of spirits to choose from.

"If Europe dried up, then we're sitting on inventory we didn't need," Harris said by phone. "And that's a really tough position to be in."

What American whiskey makers have dreaded is becoming reality. The European Union started taxing a range of U.S. imports on Friday, including Harley-Davidson motorcycles, cranberries, peanut butter, playing cards and whiskey. The bloc is responding to President Donald Trump's decision to slap tariffs on European steel and aluminum.

American distilleries large and small have watched warily as the threat of tariffs from Europe ratcheted up in recent weeks. And while larger, corporate-owned facilities tend to do the most business overseas, small and midsize companies could be especially vulnerable, since they lack the ability to stockpile reserves and take other protective steps.

Four of the five top growth markets by dollar value for American distilled spirits were in Europe -- the United Kingdom, Germany, France and Spain. Total U.S. spirits exported to the EU in 2017 were valued at $789 million, the distilled spirits trade group said.

American whiskey also has been targeted by other countries embroiled in trade tensions with the U.S., including China, Canada and Mexico.

In Germany, some whiskey retailers predict consumers will probably refrain from buying expensive American whiskey and go for cheaper alternatives once the tax is added to U.S. spirits. Volker Rickmann, from the Tabac & Whisky Center in Berlin, predicted his customers would buy Canadian and Irish whiskeys once U.S. spirits prices rise. At the Staendige Vertretung bar, supervisor Rowena Strehlow showed a near-empty bottle of imported Wild Turkey Bourbon.

"Germans only order expensive drinks for special occasions," she said. "Once the prices rise, they will simply drink something else."

In a recent letter to U.S. Commerce Secretary Wilbur Ross, the Distilled Spirits Council said: "The imposition of tariffs on these products by our major trading partners threatens to seriously impede the export progress that has benefited our sector and created jobs across the country."

European markets -- led by Germany, Italy and the UK -- represent about 25 percent of Catoctin Creek's overall business, Harris said. The distiller, which makes rye, gin and other spirits, has invested close to $100,000 in recent years to build its European business, he said. It developed special bottles and labels, built distribution networks and promoted its products.

"We're continuing on right now, hoping that it will blow over," Harris said. "But I am not a big fan of these trade tariffs. I think they are ill-thought through. I've had certain people say, 'Well, this would be our patriotic duty to take it on the chin so that we can normalize the playing field out there.' But I come from a free-trade background. Let us compete freely, fairly in these markets and our products ... will do well."

Some of his inventory could be sold in the U.S. if European sales decline, Harris said. But expanding market share in the ultracompetitive U.S. market is tough for a small distiller.

Industry giant Brown-Forman Corp., whose brands include Jack Daniel's Tennessee Whiskey and Woodford Reserve, tried to hedge against tariff-related price increases by stockpiling inventories overseas. About one-fourth of its revenue is generated in Europe.

But small and midsize distilleries often don't have the luxury to stockpile supplies.

"That's just not an option. We don't have that kind of capital," said Amir Peay, owner of the Lexington, Ky.-based James E. Pepper Distillery, whose signature bourbon and rye brand is James E. Pepper 1776.

Peay had projected the European share of his business -- now about 10 percent of overall sales -- would more than double by next year. His distillery spent hundreds of thousands of dollars in the past year expanding its European presence. Now, the tariffs come as "a punch to the gut," he said.

Meanwhile, at the distillery he founded with his wife, Becky, in Purcellville, Va., Harris is bracing for a drawn-out trade battle.

He worries his overseas distributors might drop his spirits if the dispute drags on, and consumers will quench their thirst elsewhere. Already, rye whiskeys are coming out of Ireland and Scotland, he said, and with a bit of Internet digging, "I could probably come up with a German distiller who's making a corn spirit that could, for all practical purposes, be very similar to bourbon."

The industry is known for its patience, since whiskey takes years to mature. Harris wants to take the long view. But he sees little reason for optimism on the trade front.

Information for this article was contributed by Miriam Karout of The Associated Press. 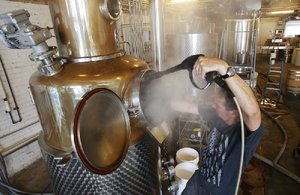