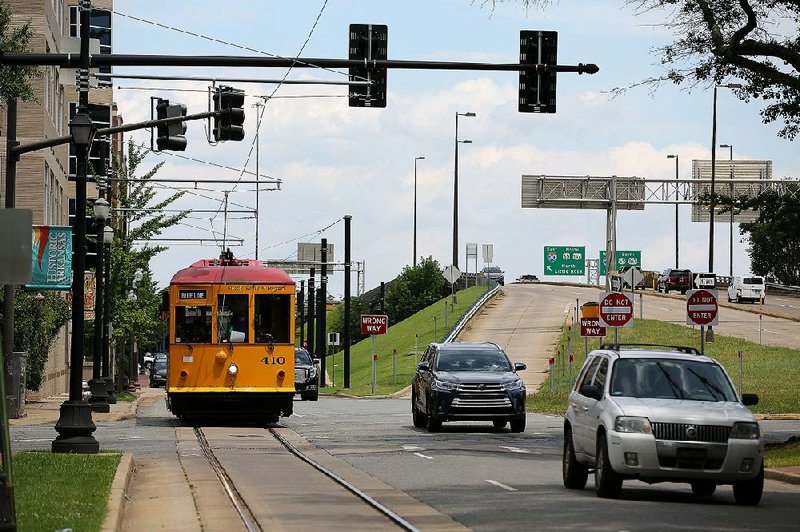 The latest version of the $631.7 million 30 Crossing project will require Rock Region Metro to relocate 15 catenary poles used on its downtown streetcar system, mostly along a section of East Second Street in Little Rock.

The cost to relocate the poles and replace and re-string the related catenary wire is an estimated $455,000, a sum Rock Region's interim executive director said the transit agency cannot afford.

"This is a huge financial burden for METRO, which is severely limited by its funding structure when it comes to reserving funding for unexpected, one-time projects such as this," Wanda Crawford said in a letter to the Arkansas Department of Transportation that was dated April 10 but which was released last week.

In the letter that addressed a range of concerns Rock Region has with the project, Crawford formally asked the department to provide the money to relocate the 15 catenary poles, replacing and re-stringing the catenary wire and the associated engineering and design services.

Citing a 2004 right-of-way agreement between the two agencies, the Department of Transportation maintains that it isn't responsible for paying for the work.

The catenary poles hold up the overhead lines used to transmit the electricity to power the trolleys over the tracks along a 3.4-mile route in downtown Little Rock and North Little Rock.

A final design of the project to upgrade the Interstate 30 corridor through downtown Little Rock and North Little Rock isn't available yet, according to state highway officials.

"The number of catenary guide poles impacted has really yet to be determined," said Danny Straessle, department spokesman.

Crawford said she was working on assumptions presented at a March 14 meeting between Rock Region and department officials.

At the time, department officials said Second, which is a two-lane street, would be reconfigured into a two-way street with four lanes on a two-block section between River Market Avenue and South Cumberland Street. At South Cumberland, Second will become one-way again.

Although Second belongs to the city, the portion that is affected by the project is in the transportation department's right of way associated with Interstate 30. Right of way is the right to make a way over a piece of land. The right of way typically extends beyond the actual roadway. Federal regulations allow states to create a safety zone to ensure there is no interference with using the property for transportation.

The department's response to Rock Region's request came in a June 7 letter from Scott Bennett, the department's director. The letter included a 2004 agreement between the department and Rock Region, then known as the Central Arkansas Transit Authority, allowing the transit agency to build, maintain and operate the streetcar system on department right of way.

Among other restrictions, the agreement said the transit agency "agrees to occupy and use the Commission's rights of way solely at its own risk and expense."

In another section, Rock Region agreed to "be solely and exclusively responsible for payment of all cost of the initial and subsequent construction, maintenance, repair, operation, or modification of the Project, including any modifications or repairs to the improvement on the Commission's property."

"This permit states that Rock Region Metro is responsible for all costs associated with the relocation of their facilities on [Arkansas Highway] Commission right of way," Bennett wrote. "This responsibility is consistent with the permits that the department enters into with other parties [such as utility companies] who choose to place their facilities on commission right of way."

But a list of specific rights of way locations in the 2004 agreement didn't include the section of East Second in question. The department later provided a copy of a similar 2002 agreement. Although that agreement addresses the transit agency's use of the Main Street bridge over the Arkansas River between Little Rock and North Little Rock, an exhibit attached to the agreement specifically refers to the department's right of way on East Second.

The agency also provided a map showing the right of way for Interstate 30, which included the two-block section of East Second.

"Those poles are clearly in the right of way," Straessle said.

At Tuesday's monthly meeting of the Rock Region Metro board of directors, where copies of her letter was included in the board's meeting documents, Crawford said she would reserve discussion of the department's response for next month's board meeting.

By then, the transit agency's new boss, Charles Frazier, will be on board. Frazier, a former executive at a Florida transit agency, was hired in May. He replaces Jarod Varner, who led the agency for four years before his departure last August.

This is the second time that Rock Region Metro's streetcar system has faced potential impact from the 30 Crossing project.

Three years ago, a proposed design of an interchange on I-30 to funnel traffic safely in and out of downtown Little Rock wouldn't have been able to accommodate the streetcar route serving the Clinton Presidential Center and the Heifer International headquarters. The route would have to have been relocated or removed or the interchange modified.

In the end, the department came up with another design.

The Metro streetcar system has been operating for 14 years. Its first phase opened in 2004. A second phase that took trolley service to the Clinton Presidential Center opened in 2007.

Civic leaders have said the trolleys have helped spurred revitalization in downtown and fostered economic development. They often are featured in materials promoting the area.

A promotion offering free fares to ride the trolley boosted ridership last summer. But the promotion ended and Rock Region's partners -- mainly the cities of Little Rock and North Little Rock and Pulaski County, which provided more than $13 million of the agency's $18 million annual operating budget -- declined to provide the extra funding needed to continue the promotion.

As a result, ridership on the trolleys have declined. More than 15,000 people rode the streetcars through the first five months of the year, a nearly 28 percent decline from the same period a year ago when more than 21,000 rode the streetcars.

Rock Region has said it will pay for a study to look at the future of the streetcar system, including possible ways to expand it.

The dispute over the right of way comes during a 45-day public review of an environmental assessment of the 30 Crossing project. It includes what is called a location-and-design public hearing. Jointly sponsored by the department, the Federal Highway Administration and the U.S. Army Corps of Engineers, the hearing will be held from 4 to 7 p.m. on July 12 in the Silver City rooms of the Wyndham Riverfront Hotel at 2 Riverfront Place in downtown North Little Rock.

The project is the single largest one the department has ever undertaken.

Central Arkansas planners had long called for an overhaul of the congested corridor, which features the convergence of six major highways in the space of fewer than 7 miles. The I-30 bridge over the Arkansas River, which dates to the late 1950s and was built at a cost of $5.5 million, carries 124,000 vehicles daily.

The latest design for the 10-lane alternative features four lanes that would be more like city streets, with ramps to lower speeds, narrower lanes, traffic signals and other features that will, officials say, allow traffic moving on or off I-30 to safely interact with pedestrians and other non-interstate traffic.

The 10-lane alternative has been referred to as a mix of six main through lanes with four collector-distributor lanes. The latter are separated by a wall from the main lanes, have slower speeds and allow traffic traveling between Little Rock and North Little Rock to cross the bridge without entering the main interstate lanes.

The project also includes improvements to the section of I-40 between MacArthur Drive and U.S. 67/167 in North Little Rock and a new interchange in Little Rock to replace the one at Cantrell Road and I-30. Removal of the Cantrell/I-30 interchange would create what city officials envision as a 17-acre park. 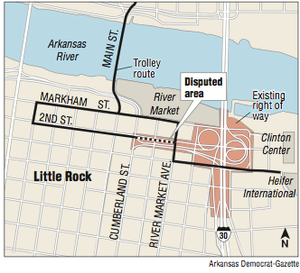