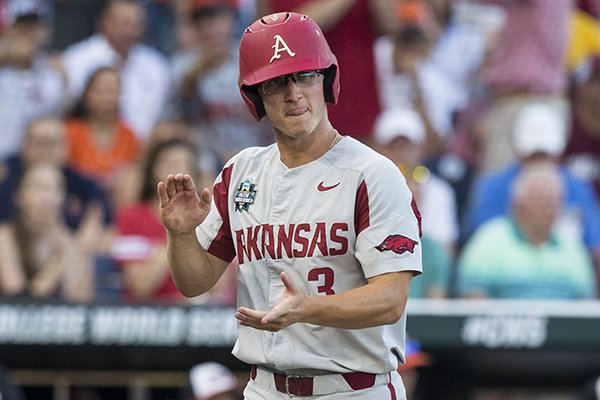 Arkansas first baseman Jared Gates claps his hands as he scores a run during the fifth inning of a College World Series finals game against Oregon State on Tuesday, June 26, 2018, in Omaha, Neb.

Knight (14-0) became the Razorbacks' single-season leader for victories with six strong innings as the No. 5 Razorbacks downed No. 3 Oregon State 4-1 before a crowd of 25,321 at TD Ameritrade Park. Closer Matt Cronin picked up his 14th save, also a single-season school record by posting three consecutive outs with a runner at first in the ninth.

"The school record thing, that's huge for Cronin, and I'm happy with it too," Knight said. "It's been a long year, but it's been a fun year and it just shows that hard work pays off."

The University of Arkansas, Fayetteville (48-19) will shoot for the national championship tonight at 6. Oregon State (53-12-1), which had been held to one run or less just twice this season, must win the next two games to claim its third championship.

The winner of game 1 has gone on to claim the championship 73 percent of the time at the CWS.

Arkansas, which managed just five hits while striking out 16 times, was the beneficiary of a couple of umpiring decisions, including an interference call that wiped off an Oregon State run in the second.

"We feel very fortunate to have won the ball game," Arkansas Coach Dave Van Horn said. "Baseball is a little different game sometimes, and you can have eight innings where you don't do much and you put together one inning and you pitch good enough and play defense and you can win."

"We give a lot of credit to the pitching for Arkansas," Casey said. "I thought they threw the ball real well."

The runner's interference on catcher Adley Rutschman nullified a run in the fourth inning and a missed call on a flare down the line in the fifth inning, which was overturned by replay, might have given the Beavers another run.

Oregon State pitchers struck out 16 batters, a career-high 11 by freshman reliever Christian Chamberlain, and the Beavers outhit the Hogs 9-5, but Arkansas concentrated its scoring efforts on one big inning to knock out Luke Heimlich (16-3), who was making his third start at the CWS.

"That wasn't the way we usually win," said Arkansas second baseman Carson Shaddy, whose walk touched off Arkansas' four-run fifth inning. "We usually have the hit parade and we didn't have the hits today. We took advantage of some things."

Knight left with a 4-1 lead after six innings and 97 pitches, receiving a series of hugs from his coaches and teammates as he entered the dugout. The junior allowed one run on seven hits and a walk. He struck out six batters and allowed three or fewer earned runs for the 18th time in 19 starts.

"It was kind of surreal knowing that that was the last time he's going to probably step on the mound for us," Van Horn said.

"I guess the thing I'm most proud about him tonight was the way he commanded his fastball," Arkansas pitching coach Wes Johnson said. "You go back to his last four starts, he really hasn't had fastball command. He's had breaking ball command. ... He wound up with six strikeouts and four of them were on fastballs."

Arkansas turned in a pair of gold-star defensive plays to keep the hard-hitting Beavers in check.

First baseman Jared Gates made a diving catch in foul territory in the fifth inning, skidding on his stomach near the stands to hang on to a looping liner.

In the seventh inning, Oregon State's Zak Taylor ripped a hit inside the third base bag that bounced off the grandstand right to Heston Kjerstad, who easily threw Taylor out second base. Kjerstad lost a deep fly ball in the sun earlier in the game that went for a double.

Barrett Loseke allowed two hits over two innings behind Knight and came out after Rutschman's leadoff single in the ninth. Cronin recorded two strikeouts with his fastball touching 95 mph, then got the final out on a line drive to the shortstop Jax Biggers.

The left-hander Heimlich was in control through four innings, holding Arkansas off the board on a walk and a single to that point as the Beavers built a 1-0 lead.

Heimlich became the first pitcher to hold the Hogs scoreless through four innings since LSU's AJ Labas did it on May 6 in a 7-5 victory for the Tigers.

"One of our goals offensively tonight was to get his pitch count up, since it was his third start in 11 or 12 days," Van Horn said.

Oregon State's Trevor Larnach led off the second with a double and scored with Michael Gretler's RBI single after Tyler Malone reached on an infield tapper. Knight struck out Kyle Nobach and Taylor to finish the inning.

The runner's interference call in the fourth inning seemed to serve as a catalyst. With runners at first and third and no outs, Malone his a hot grounder to Gates at first, who fired to second to start a double play try.

Though Biggers' relay to first did not beat Malone, he was called out due to runner's interference on Rutschman, negating Larnach's would-be run from third. Knight got out of the inning with no runs allowed by striking out Gretler.

"That was a little bit of a momentum shifter," Knight said. "That gave me a little drive to want to get out of that inning. Then offensively we started putting some good at-bats together, so I think it played out in our favor."

The Razorbacks chased Heimlich in a slow-motion fifth inning rally that featured just two hits, but five other base runners on walks and other Oregon State miscues as seven consecutive batters reached base.

Shaddy started the uprising with a one-out walk. Gates singled him to third with a hit to right field, then Koch drove him home with a single into center field to tie it 1-1. Heimlich hit Biggers with a 1-2 pitch to load the bases, then plunked Eric Cole to force in the go-ahead run.

Heimlich induced a ground ball to second base from Casey Martin, who would have beaten out a double-play try, but Nick Madrigal bobbled the ball while pivoting to throw to second and all the runners were safe as Koch scored.

Casey called on the left-handed Chamberlain with a 1-0 count on Kjerstad and the freshman completed the RBI walk with three consecutive balls to give Arkansas a 4-1 lead.

Chamberlain struck out Luke Bonfield and Fletcher to get out of the inning and allowed only two hits, two-out doubles by Fletcher and and Kjerstad in the seventh and ninth.