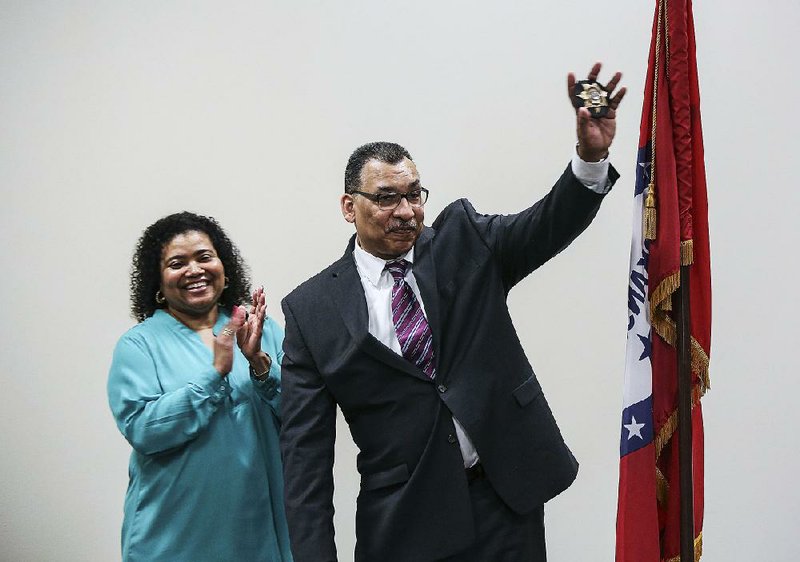 FILE — New Jacksonville Police Chief John Franklin shows off his badge with his wife, Verlane, by his side after his swearing-in ceremony June 1, 2018.

After Sunday, the Jacksonville Police Department will no longer make arrests for possessions of small quantities of marijuana.

Starting next month, however, Franklin said his officers will instead issue citations for people who possess less than 15 grams of marijuana unless those people have previous convictions for drug activity.

Offenders will still be assigned court dates, Franklin said, they simply will not be taken to jail.

"We still want to hold people accountable and minimize the time spent on those arrests that don't really go anywhere," said Franklin, who began as Jacksonville's chief on June 1. "The courts themselves have decriminalized small amounts. What are they going to do with these people? They're not going to put them in the county jail. We know Pulaski County is filled to the brim."

Though Jacksonville's City Council did not vote on the switch to citations, three of the four members available for comment Wednesday said they were in favor of the new policy.

"Our officers are out there, and they could be somewhere else where someone needs their help very badly," Ward 3 council member Barbara Mashburn said. "You're putting officers where we need them."

The council member who did not explicitly endorse the move, Terry Sansing of Ward 2, said he was indifferent about the policy.

"I don't feel too much one way or the other about this," Sansing said. "[Franklin] has some very valid reasons, and we're just going to wait and see how this plays out."

At least two other cities in Arkansas -- Fayetteville and Eureka Springs -- have instituted similar policies, Arkansas Sheriffs' Association Director Scott Bradley said. However, he said, regarding the move to citations for marijuana possession: "I don't think that is common."

Also, he said, "as we move forward with medical marijuana being legalized, it will be interesting to see how that affects the Legislature this year."

A citations initiative was voted down earlier this month in Little Rock, with Mayor Mark Stodola, Little Rock Police Chief Kenton Buckner and six of eight members of the Little Rock Board of Directors opposing the measure.

Ward 2 City Director Ken Richardson, who proposed the policy change, said his position has not changed.

Richardson said moving to citations for minor drug offenses would benefit the Police Department by saving time and money and benefit the offenders, who could lose scholarships or jobs because of an arrest.

Richardson said he has no intention of giving up the effort and that he plans to raise the policy again after elections, saying a new city board could make all the difference.

Such a move in Little Rock, however, where there were more than 820 marijuana-possession arrests in 2017 alone, would have to come with the endorsement of law enforcement officials, Richardson said.

In the June 8 meeting, Buckner said criminals would take advantage of the inability of officers to make arrests on minor marijuana-possession charges.

"It will actually make our police officers better able to enforce the law because they won't spend hours booking someone," Collins said. "Don't forget when you start arresting people, that takes hours of work. A citation takes just a few minutes."

Ultimately, Franklin said, efficiency is the primary motivator for the move to citations.

"I have to make the most optimal use of our officers here," Franklin said. "To present high visibility of officers -- particularly in areas that need it -- just by being out there and being visible, I'm making the best use of what I have to work with. You have to ask yourself, what's the best use of our law enforcement resources?"