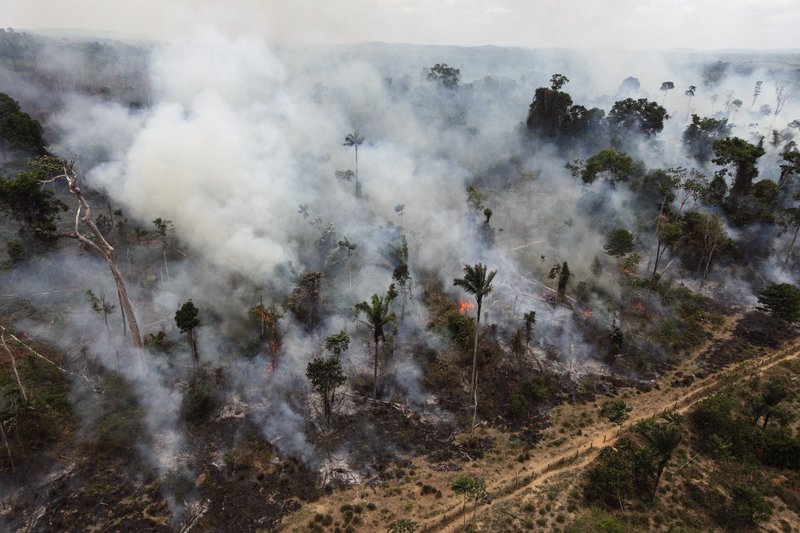 FILE - In this Sept. 15, 2009 file photo, a forest in the Amazon is burned illegally near Novo Progresso, in the northern Brazilian state of Para. Forest degradation in 2017 in Brazil, home to most of the Amazon rainforest, made up nearly 30 percent of global deforestation, more than any other country. (AP Photo/Andre Penner, File)

The data from the University of Maryland show tropical forests around the globe lost 39 million acres of tree cover in 2017 -- an area the size of Bangladesh. That makes 2017 the second-worst year on record, after 2016, since researchers began gathering the data in 2001. Losses in Brazil, home to most of the Amazon rain forest, made up nearly 30 percent of the total -- more than losses in any other single country.

"These numbers show an alarming story of the situation for the world's rain forests," Andreas Dahl-Jorgensen, deputy director of Norway's International Climate and Forest Initiative, told reporters when the figures were presented. "It's really a call to action for everyone."

This week, Norway is hosting the Oslo Tropical Forest Forum, which will address how protecting forests can contribute to meeting the Paris climate goals.

While Colombia's losses were a much smaller proportion of the total, the South American country experienced a worrying jump: Tree cover loss rose 46 percent in 2017 from the previous year, and the number of acres lost -- more than 105,000 -- was more than double the average loss from 2001-15.

The World Resources Institute, which released the data on its Global Forest Watch platform, linked the increase to the Colombian government's peace deal with Revolutionary Armed Forces of Colombia rebels, who had severely limited commercial use of large forested areas they controlled for decades. With the rebels no longer in control, land speculators and people who are clearing land for farming, mining and logging have rushed in.

Colombian President Juan Manuel Santos acknowledged that the rebels' retreat was partially responsible for deforestation in an interview Monday. But he said the government is training security forces to protect the Amazon. During Santos' presidency, protected areas in Colombia expanded threefold.

The data released Wednesday measure "tree cover loss," or the death of a tree's leaves. The data might give a more pessimistic picture than other deforestation figures since they don't take into account whether the loss is permanent, while also recording leaf-loss in small areas and capturing forest cover lost to fire. But such data are useful because they can provide a more complete snapshot of disturbances to the world's forests.

Many other deforestation figures, for instance, don't count trees lost to fire, which doesn't necessarily result in the permanent loss of a tree, but increases carbon emissions, makes trees more vulnerable to future fires and can lead to less biodiversity. Fires are becoming an increasingly important part of the picture in the Brazilian Amazon, where they accounted for 31 percent of tree cover loss last year, according to the data.

"Fires are playing a bigger role and basically bringing carbon emissions back up to the general range where they were when deforestation rates were so high in the early 2000s," said Mikaela Weisse, a research analyst at the World Resources Institute.

Fires are increasing partially because of the effects of climate change but the majority are set by people clearing land for other uses, Weisse said. A lack of enforcement of bans on setting fires and other forest destruction as well as a rollback in environmental protections by Brazilian President Michel Temer's government were likely leading to the increase in human-set fires, experts from the institute said.

Brazil's Environment Ministry said it could not immediately comment because it had not reviewed the data.

Information for this article was contributed by Joshua Goodman and Christine Armario of The Associated Press.