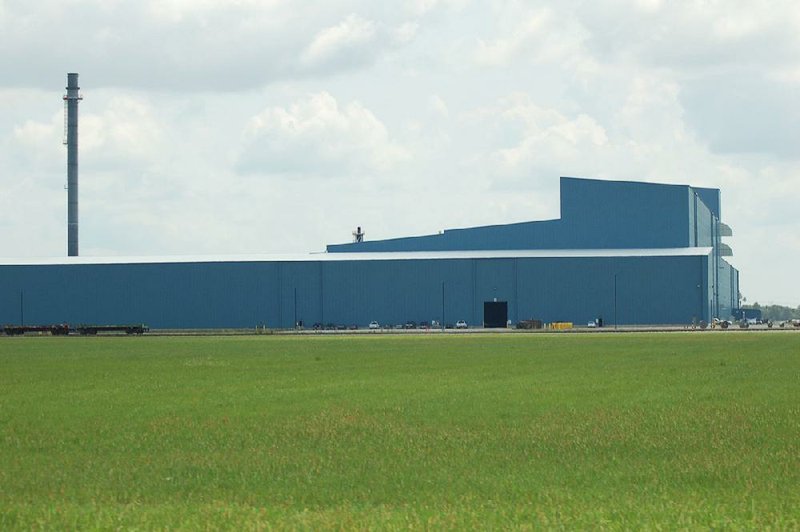 Big River Steel said Friday that it will expand its operations near Osceola with a $1.2 billion investment that will double its hot-rolled steel production and result in the hiring of some 500 new employees.

Salaries for those new jobs, according to the Arkansas Economic Development Commission, will average $75,000 a year.

Big River opened its scrap-recycling and steel production facility south of Osceola in northeast Arkansas just last year, after an investment of about $1.3 billion.

"Big River Steel just keeps on giving," Mayor Dickie Kennemore said by telephone after the announcement. "I tell you, when they first located here, it's like we'd won the economic development lottery. I've been mayor a long time. I went through the downturns of our textile mills closing and, back then, you'd have given anything to get 50 or a hundred jobs."

City sales-tax collections jumped from about $700,000 a year to $1.2 million during construction of Big River's plant and leveled off now at about $900,000, Kennemore said.

A 48-unit apartment building is under construction, Kennemore said. "I'm in real estate, and I've built 18 units myself," he said. "We used to have a housing surplus here. We don't anymore."

David Stickler, Big River's chief executive officer, said in a joint statement with Hutchinson that the expansion "will further cement Big River Steel's position as a global leader in terms of advanced manufacturing and environmental stewardship."

Big River said construction of the expansion will start this year and take about two years to complete.

It's an expansion Stickler all but predicted in February 2017, just before an official grand opening for the plant.

"Our hope is that some day we double our capacity and add another 250 or so workers with the guaranteed compensation of no less than $75,000 a year," Stickler said in an interview with the Democrat-Gazette.

The company said it supplies steel products to nearly 200 customers in the automotive, energy, construction and agricultural industries.

Thomas B. Schueck, chairman of Lexicon Inc., a Little Rock construction firm that has worked with Big River and other manufacturers to help the steel industry blossom in a Delta county better known for its production of cotton and soybeans, hailed the news for Arkansas as well as for the industry.

Schueck estimated that $800 million of the $1.2 billion expansion will be for equipment and financing with the remainder spent on construction.

"It will produce a lot of jobs that pay high and a lot of construction workers for two years," Schueck said.

Big River is on Arkansas 198, just south of Osceola and about a mile west of Sans Souci Landing on the Mississippi River. Its neighbors include steel-related industries such as Viskase Co. and agri-business such as Bunge Grain.

Nucor Corp., the nation's largest steel producer, has four facilities upriver a few miles near Blytheville, employing some 1,700 people. Nucor also is building a $230 million cold mill that will create about 100 jobs.

About 2,000 workers helped build the Big River plant during the peak of its construction.

A recently ordered tariff of 25 percent on steel imported into the United States from Canada and China has helped make a "good climate for [domestic] steel right now, and there's definitely a demand for that type of steel," Schueck said.

"They'll have everything it takes to make it there and, being right on the river, they can put it on a barge and ship it anywhere," he said.

Along with doubling its hot-rolled steel production, Big River said it is working on a "next generation" coating line for automotive applications. "Such an installation may involve a steel industry partner," the company said.

Big River also said it was "exploring opportunities ... with grain-oriented steel products, either within this expansion phase or as a future endeavor."

Big River was the first company to receive state aid as a "superproject" under state constitutional Amendment 82.

The aid package in 2013 included a $125 million bond issue comprised of a $50 million loan, $70 million for site preparation and $5 million to cover costs of issuing the bonds.

Big River paid off the $50 million loan last September, 17 years ahead of schedule.

Other incentives available are tax refunds on building materials, taxable machinery and equipment. Big River also received $10 million for workforce development, with most of that being done at Arkansas Northeastern College, about 10 miles to the north, in Burdette.

Act 1046 of 2017 also established a tax credit for purchase of equipment used exclusively for reduction, reuse or recycling of solid waste material.

Arkansas Economic Development Commission Executive Director Mike Preston said Friday's announcement shows that the incentives are as important today as they were in 2013 because Texas was lobbying hard for the expansions ultimately announced for Arkansas. "We knew then we were in a good position for its [Big River's] future growth," Preston said. "We wanted those jobs in Arkansas then, and we wanted them here now."

Kennemore, the Osceola mayor, acknowledged that Big River employees aren't necessarily residents of his town, and some live out of state.

"I'd love it if everybody at Big River lived here, but Big River is bigger than Osceola," he said. "I'm proud that Blytheville and Marion and towns all around are part of this."

The city plans to spend $3.5 million on upgrading its water and sewer systems. "We've got growing pains," he said. "But they're good growing pains." 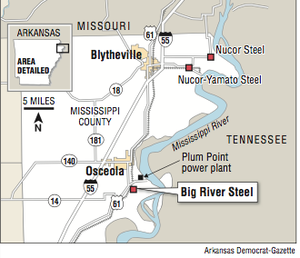