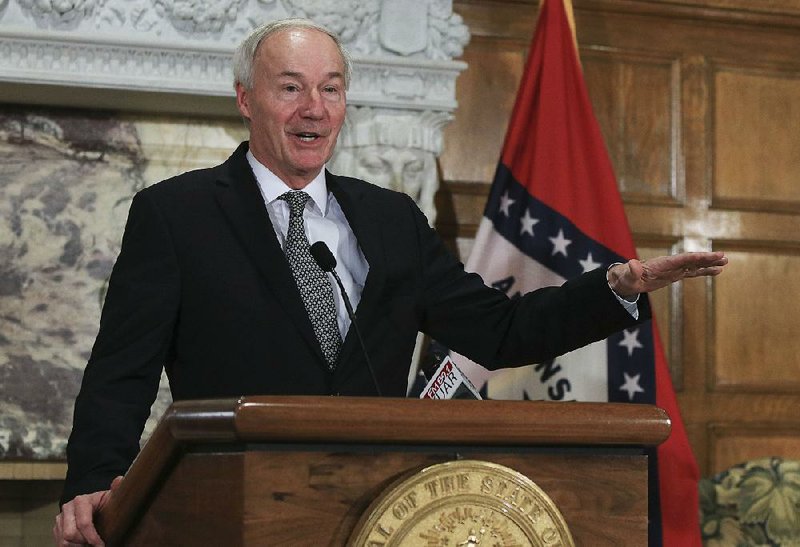 Gov. Asa Hutchinson talks during a press conference at the state Capitol in this photo.

FORT SMITH -- Arkansas' first crisis stabilization unit opened Wednesday with officials from across the state praising it for serving the needs of the mentally ill in western Arkansas and pointing to it as a template other states can follow.

The center is the first of four crisis stabilization units that have been authorized as a pilot program to be developed in Arkansas. Other units are planned in Pulaski, Craighead and Washington counties, with the state allocating $1.6 million for each.

"It is exciting to see that Arkansas is doing something that other states will look at and learn from, adapt, and we will lead," Gov. Asa Hutchinson told about 300 people gathered at the Western Arkansas Counseling and Guidance Center. "This is important for our nation."

Hutchinson told the crowd that the problem of mental illness was discussed last weekend during a governors conference he attended in Washington, D.C. The discussion was related to the Feb. 14 mass shooting at Marjory Stoneman Douglas High School in Parkland, Fla., that left 17 dead.

Hutchinson said attendees at the White House meeting were at a loss about what to do.

The 16-bed unit on the center grounds will be used to temporarily treat and stabilize people undergoing mental crises and whose only alternative until Wednesday was to be put in jail. As part of the diversion concept, law enforcement officers are being trained to recognize and deal with people showing behavioral problems because of mental illness.

The guidance center will provide for the medical and psychiatric needs of patients while they stay in the unit. A person is expected to spend 72 hours in the unit to stabilize his condition.

The unit has dormitory-style bedrooms; a central living space with sofas, easy chairs and tables; a kitchen; an attendants work area; and offices.

Not only will the unit serve the needs of the mentally ill and give them a chance to regain control of their lives, but it will also help reduce crowding in the county jail, reduce court caseloads and recidivism, and relieve the tax burden on residents, Sebastian County Sheriff Bill Hollenbeck said.

"The opening of our crisis stabilization unit now gives us the ability to take care of our brothers and sisters who have mental health issues through no fault of their own," he said.

Hudson said county, city, hospital, treatment and other entities have worked for years with others in the state to develop the stabilization unit program.

"Perhaps it is appropriate that Sebastian County is the first of the four pilot counties in our state to open a crisis stabilization unit," he said.

A supporter of the creation of the units in the Arkansas Legislature, 35th District state Rep. Clarke Tucker, D-Little Rock, said crafting the necessary legislation for the stabilization units was difficult because of the number of interested parties and their varying concerns.

He ticked off a list of entities who had input into the legislative process, including judges, prosecutors, defense attorneys, sheriffs, county judges, faith-based associations, the Parole Board and state agencies.

"There were times when I didn't know whether [legislation creating the stabilization units] was going to happen," he said.

Shue said he and Hendricks believed that passage of the Criminal Justice Efficiency and Safety Act of 2017 was a positive move to equip the criminal-justice system to deal with the needs of the mentally ill.

Demolition work is underway on two pods of a juvenile detention unit in Little Rock for remodeling into Pulaski County's crisis stabilization unit. Pulaski County is partnering with the University of Arkansas for Medical Sciences on the unit, which is scheduled to open in early May, according to County Judge Barry Hyde's office.

Officials in Washington and Craighead counties said they are still trying to acquire locations for their units.

"Everybody thinks it's a good idea, but no one wants it in their backyard," he said.