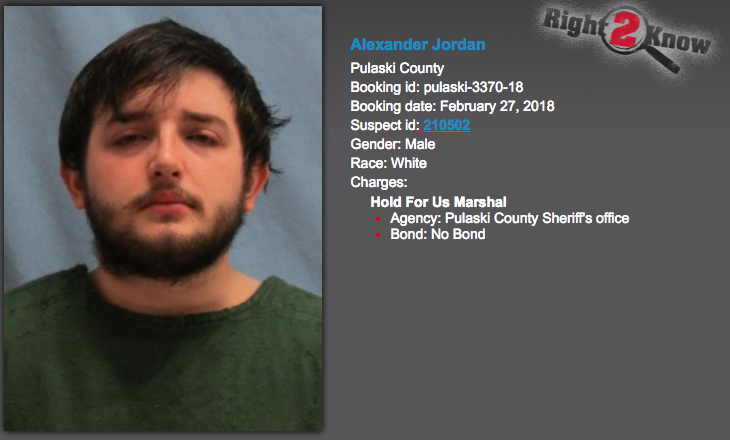 Federal agents and a hazardous-material team from the Little Rock Fire Department descended last week on a ranch-style brick house on the city's eastern edge to find a man breathing heavily who directed them to two Mason jars of liquid ricin, a deadly toxin, an FBI agent testified Wednesday.

Alexander Joseph Jordan, 21, had called 911, saying he feared he had accidentally ingested the toxin and was having heart problems, diarrhea and blurred vision, Special Agent Katie Rowbotham told U.S. Magistrate Judge Beth Deere. The judge had to decide whether Jordan, who was treated at a hospital and released, constituted such a danger to himself or others that he should remain in federal custody until a grand jury decides whether to indict him on charges of possession of an unregistered select agent.

A day after the Feb. 22 call to the Horseshoe Loop house where Jordan lives with his mother and stepfather, Deere authorized a search warrant for the house at the FBI's request. Members of the FBI and the Arkansas National Guard Weapons of Mass Destruction 61st Civil Support Team, all dressed in protective gear, found and seized the jars and a blender that Jordan said he had used to mix ingredients, including 50 castor beans he had ordered from Amazon.com., Rowbotham said. She said Jordan told investigators that he wanted to see if he could make the poison from a recipe he found on the Internet.

She said preliminary tests showed the mixture was in fact ricin, though the strength of the toxin has not yet been determined.

The agent said Jordan told authorities that he was considering killing himself by ingesting the ricin, but that he had no intention of harming anyone else, and warned authorities not to touch the liquid. He told the agent that he got the idea from the television series Breaking Bad.

While Jordan's mother and stepfather sat anxiously listening Wednesday in Deere's Little Rock courtroom and Jordan sat sniffling and wiping away tears at the defense table, the FBI agent --who has a master's degree in zoology and is a member of the Joint Terrorism Task Force -- explained the fatal consequences of inhaling or injecting the protein that is derived from castor beans.

"It's a horrible way to go," Rowbotham told Assistant U.S. Attorney Stacy Williams . She added that if the powdered form of the substance is inhaled, death would likely occur over three to five days and, "It's just excruciating."

One-millionth of a gram of ricin, which is the size of a pinhead, could easily kill a man, she noted.

Jordan told investigators that he accidentally sloshed some of the liquid on his hands when he was mixing it in the blender, and then touched his hand to his mouth. He also told them that he planned to turn it into a powder, but initially was "very hesitant to say what he was going to do with it then," Rowbotham testified.

She said the danger surrounding the concoction was such that at UAMS Medical Center, Jordan had to be kept in an isolated room and have his clothes carefully removed by three people in protective suits before he could be examined. Also, Rowbotham said, the FBI hasn't been able to search Jordan's computer yet because it has to be shipped to a special laboratory in Washington, D.C., where its parts can be decontaminated first.

The agent said interviews with Jordan's friends and former co-workers at Jefferson Regional Medical Center indicated he had recently talked about being upset about losing his job, which he described as a mutual decision rather than being fired. He had also been treated for depression and is being discharged from the U.S. Army National Guard because of it, the agent acknowledged under questioning by defense attorney Nicole Lybrand of the federal public defender's office.

Lybrand presented testimony from Jordan's stepfather, who said the younger man was placed on antidepressants in November and had been recently voluntarily discharged from an inpatient mental-health treatment program at UAMS.

"I don't think jail is the right place for a seriously mentally ill person, but I don't think home is either," she said. The judge cited "the very real possibility of inadvertently harming someone else, if the allegations are true."

She ultimately decided, after discussing options with Lybrand, Williams, a pretrial services officer and a deputy U.S. marshal, to release Jordan into the custody of his stepfather on the condition that he immediately seek inpatient treatment at UAMS until he can be transferred to a federal prison facility to undergo a thorough mental exam. Deere told Jordan's parents that the U.S. Bureau of Prison provides "first-rate treatment."