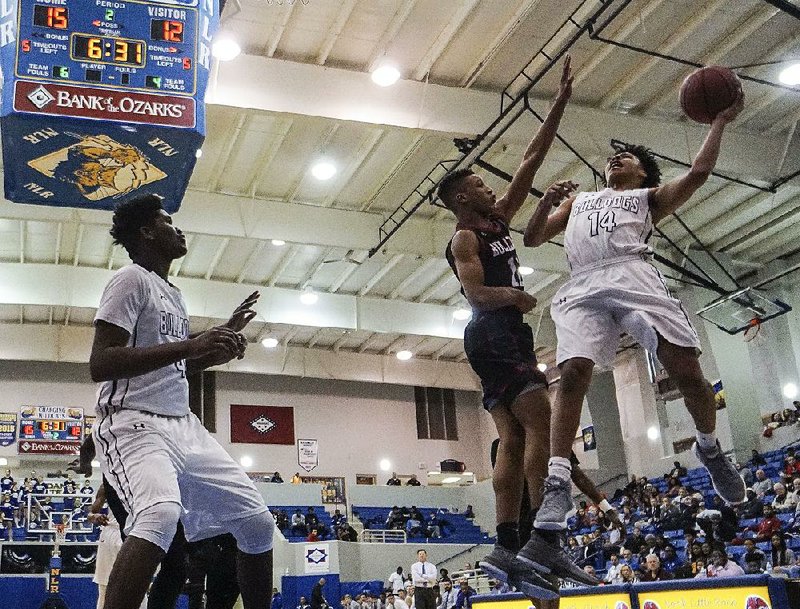 The fourth meeting this season between Fayetteville and Springdale was close until Collin Cooper got involved.

Cooper, a 6-2 junior guard, scored 11 points in the third quarter and finished with a game-high 19 points as Fayetteville turned back Springdale 52-44 on Thursday during the Class 7A boys state tournament at North Little Rock High School Arena.

Springdale (17-12) tied the game at 24-24 early in the third quarter on a three-pointer by sophomore guard Trentez Scales, but Fayetteville (19-8) responded by scoring the next 10 points. The run started when Cooper hit back-to-back three-pointers.

Springdale was never any closer than five points the rest of the way.

"I've always been told that I have enough space between defenders and if their hands are down to always shoot," Cooper said. "His hands were down and I had enough space. At that point, I knew I was on."

In addition to his two three-pointers, Cooper hit all three of his free throws and a two-pointer. By the end of the quarter, Fayetteville was holding a 39-29 advantage.

"Coop got a couple of threes and it gave us a lot of confidence," Fayetteville Coach Kyle Adams said. "He's our guy. ... He can step up and make threes and he can put it on the floor and get a couple of shots inside too. And he's a good free-throw shooter. We expect that from him and it's unusual not for us to get that from him."

The teams were tied at 12-12 after one quarter and Fayetteville managed to take a 21-20 lead at the half.

It was fourth game between the two teams this season. Springdale had won the two previous meetings, including a 70-66 victory on Feb. 20.

"This was a big one for us in a lot of respects," Adams said. "They are a bad matchup for us. We've struggled with the speed of their guards and with Carl [Fitch] inside."

Scales hit four three-pointers and wound up as Springdale's leading scorer with 16 points.

Senior Seth Stanley hit 10 consecutive free throws during the fourth quarter and finished with 26 points and nine rebounds as the sixth-seeded War Eagles (18-10) upset the No, 3 seeded Wampus Cats in a first-round game.

Stanley, who was 13 of 19 overall from the line, missed two free throws with 3.6 seconds remaining that would have iced the game for the War Eagles, but Conway failed to get off a shot before time elapsed.

Conway went more than eight minutes without scoring a point during the second and third quarters allowing Heritage to build a 21-12 advantage.

University of Arkansas, Fayetteville signee Isaiah Joe scored a tournament-high 32 points as the Grizzlies downed the Tigers in a quarterfinal game.

Northside (20-9) used a 26-8 second-quarter burst to pull away. Joe was 6 of 6 from the free-throw line and scored 11 of his points in the second quarter.

Joe, who did not play in the fourth quarter, finished with 3 three-pointers and was 9 of 9 from the free-throw line. He also grabbed four rebounds.

Northside connected on seven three-pointers, including three from junior Javion Releford (11 points, 4 rebounds). Anthony Travis scored all nine of his points in the first half.