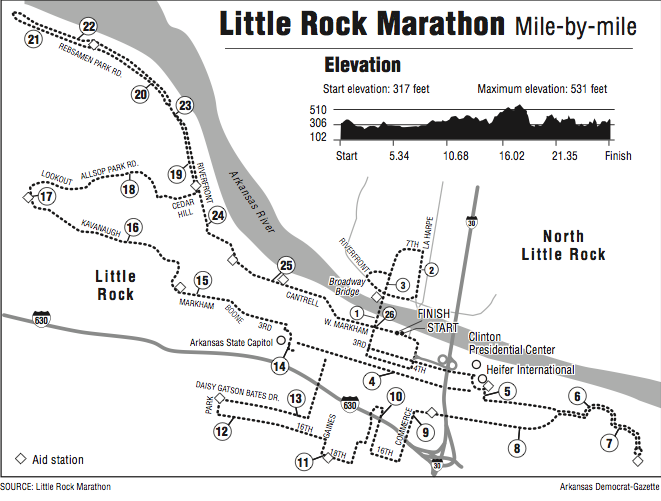 A map showing Mile-by-mile of the Little Rock Marathon

The Little Rock Marathon is a safe bet to live up to its billing as Arkansas' Race for Every Pace.

With the marathon and half-marathon Sunday -- and a 10K, 5K and kids marathon today -- organizers expect about 12,000 participants. Paces for marathon runners should put those who complete the race at the finish line in downtown Little Rock in times that will fit in a range of two-and-a-half to eight hours.

The marathon is scheduled to start at 7 a.m. Sunday when more than 2,000 runners, walkers and wheelchair racers will begin their trek past a long list of Little Rock landmarks on a course that extends from an eastern extreme near the Bill and Hillary Clinton National Airport/Adams Field to a turnaround in west Little Rock near the Murray Lock and Dam and the Big Dam Bridge.

Among those expected to run the fastest paces is Adam Bradbury, 32, of Bryant, who won last year's Little Rock Marathon in 2 hours, 45 minutes, 43.63 seconds. Bradbury said he thinks he will race at a higher fitness level this year.

"Hopefully, I'm in better shape than last year, so we'll see," he said. "Last year I took off for the summer for a while when it was hot, but this year I kind of trained through the summer."

Bradbury said he hopes to run faster than 2:45.

The bulk of Little Rock Marathon finishers will cross the line near the Little Rock Convention Center within an hour or so of breast-cancer survivor Jane Allard, 51, of Denver, or Tony Anderson, 55, of Buckley, Mich., who hopes to complete his 39th marathon overall and his fifth since he had hip-replacement surgery on March 4, 2016, exactly two years before this year's marathon.

Allard, a graduate of Little Rock Central, was well into her training program for this year's Little Rock Marathon when on Nov. 26, or a little over three months before the race, she was diagnosed with breast cancer.

"I was about halfway into training when I found out," Allard said. "I just decided as long as I was physically able, if it wasn't going to compromise my health, I was still going to do it."

Allard said the marathon was among her first thoughts after she heard her diagnosis.

"I think it was the second question I asked the doctor," she said.

Allard said she opted for radiation treatment rather than chemotherapy because she was told there was only a minimal difference in the chance for reoccurrence once the tumor was removed, and she learned radiation would not affect her training regimen as much.

"They told me that compared to chemotherapy, radiation is much easier on the body," Allard said.

Allard said her training was nearly unimpeded, and she hopes to break five hours but would be satisfied with under six.

"I don't know if doctors would recommend a marathon for most people, but they said, 'As long as you're still feeling good, yeah, go ahead,' '' Allard said. "They said it could help reduce the side effects. That may very well be why I had so few. I stayed active and continued to train and didn't just lie around letting it affect me."

When Anderson first noticed pain from his hip in July 2014, he made a misdiagnosis common among those with damaged hips.

"I thought I pulled a groin muscle, but I never got over it," said Anderson, who has completed a marathon in 38 different states. "Trying to get my marathons done, I just toughed it out, but each marathon got worse over a year and a half. I walked the last 10 miles at Richmond in 2015, so that was it."

Anderson said he finally agreed to see a physician, with the help of his wife's insistence. Shortly after his original diagnosis, research and two doctors convinced him he could continue running and that his goal of a marathon completed in each remained within reach.

Anderson's best marathon, pre-surgery, is 3:47. His best since is 4:47, run in Providence, R.I., in May. He said there is no specific limit to the mileage his artificial hip can endure.

Anderson said he has run about 2,000 miles since his surgery. He said he knows it has reset his potential, but he still sets goals.

"I'm still a runner," he said. "I'm still hopeful I can get back to 4:30 or maybe under 4 hours. I'm just trying to build up my base. They say it takes a year or two for the muscles to come back because they get stressed in that process. I'm hoping to go under 4:47 in Little Rock."

Despite his talent level, Bradbury has a clear understanding of obstacles overcome by marathoners. His wife Nicole Bradbury, a frequent finisher of the race, will make an attempt Sunday in her fourth month of pregnancy.

"She just wants to do it just to be part of the race," Adam Bradbury said. "I would assume she can go under five hours, but she said, 'I'm just going to do it.' '' 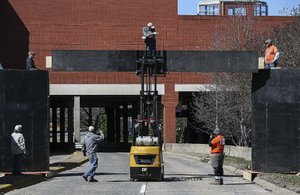 Photo by Mitchell PE Masilun
Workers on Friday set up the start/fi nish line for the Little Rock Marathon on La Harpe Boulevard. Organizers expect approximately 12,000 participants for the fi ve races today and tomorrow. The 10K, 5K and kids marathon will take place today. Sunday will feature the marathon and half-marathon. 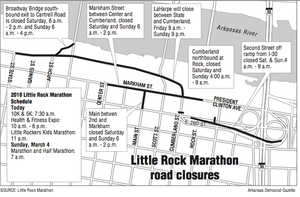