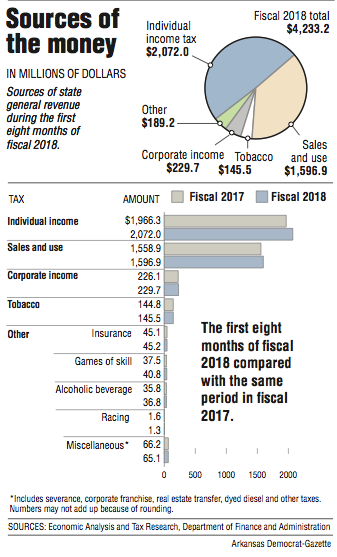 Arkansas' general-revenue tax collections in February increased by nearly 6 percent over the same month a year ago to $457.9 million, setting a record for the month.

The year-to-year increase was $25.5 million, but collections fell about $800,000 short of the state's forecast, the Department of Finance and Administration said Friday in a monthly report.

The previous record for February was $432.4 million in 2017, said Whitney McLaughlin, a tax analyst for the finance department.

"I'm very pleased with the revenue report," Gov. Asa Hutchinson said in a written statement released Friday afternoon. "Our revenue numbers are strong. The report shows continued strength in our budget. It reflects the fact that Arkansans are working in record numbers and that their incomes are going up. We will continue to manage the budget conservatively, but this puts us in a strong position as we enter the last quarter of the fiscal year."

So far in fiscal 2018, individual income tax collections have represented the lion's share of year-to-year increases. The growth in that category is $105.6 million, or 5.4 percent, over the same period in fiscal 2017 to $2.07 billion. The totals also exceed the forecast by $43.9 million, or 2.2 percent.

Tax refunds and some special government expenditures, such as court-mandated school desegregation payments, come off the top of total general revenue, leaving a net amount that state agencies are allowed to spend.

The total net revenue for the first eight months of the fiscal year was $3.59 billion, which exceeds projections by $79.6 million. It's also $158.5 million, or 4.6 percent, more than the total from the same period a year ago.

Another boost for the bottom line came from the state paying $12.1 million less than it expected for individual and corporate income tax refunds.

Finance department Director Larry Walther said he's not second-guessing the decision made in May, even though the state has exceeded its net revenue forecast two-thirds of the way through the fiscal year. Hutchinson also reduced the fiscal 2017 budget by $70 million but restored much of that cut after collections rebounded.

"The way we are required to make sure that we only spend what we take in and not spend over, we have to be cautious," said Walther.

Richard Wilson, assistant director of research for the Bureau of Legislative Research, said that while net general revenue has exceeded the forecast so far by nearly $80 million, "about $22 million of that figure is due to expected individual refunds that did not flow during January and February.

"Those refunds will likely be paid, along with additional expected refunds, during March and April," he said.

Across the nation, states' total tax revenue appears to be relatively strong so far in fiscal 2018, the National Conference of State Legislatures said in a report.

"This is in contrast to last year when many states had to revise their forecasts downward and make do with less revenue than expected," the conference said in a report last month.

Hutchinson has proposed a $5.62 billion budget for fiscal 2019. That's an increase of $172.8 million over this fiscal year. Most of the increase would go to the state Department of Human Services, particularly the Medicaid program.

The governor also wants to set aside $63.9 million as surplus funds and earmark $47.9 million for a "restricted reserve fund" that could be used with the Legislature's approval for extraordinary needs in an economic downturn and to help finance future tax cuts. He proposes using the $15.9 million to help match federal highway funds.

The governor's proposed budget factors in a projected $25 million reduction in general revenue resulting from the 2017 Legislature enacting his plan to cut individual income tax rates for Arkansans with less than $21,000 in taxable income, effective Jan. 1, 2019. The plan is projected to reduce general revenue by $50 million a year, starting in fiscal 2020.

Legislative leaders and the governor started negotiations this week over the proposed Revenue Stabilization Act that will distribute general revenue to agencies in fiscal 2019.

The budget negotiations are "pretty much" wrapped up, said Sen. Larry Teague, D-Nashville, who is a co-chairman of the Legislature's Joint Budget Committee.

Teague said he hopes to have copies of the proposal on the desks of lawmakers on Monday. Legislative leaders aim to wrap up the fiscal session by the end of next week.