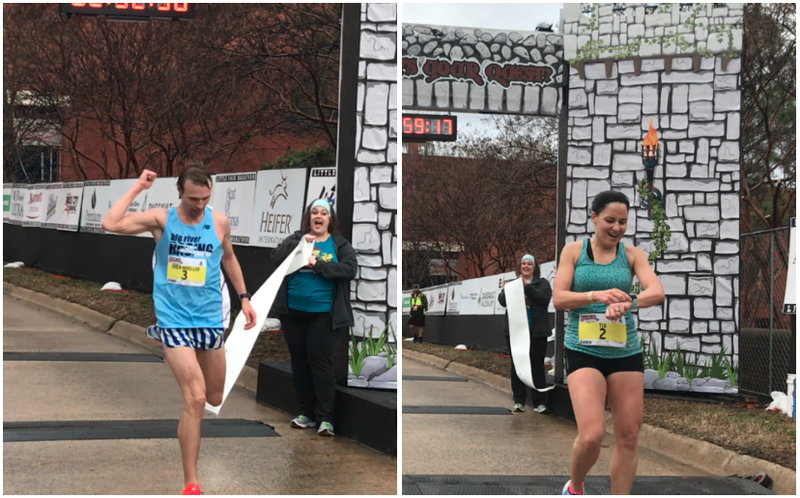 A 23-year-old from St. Louis finished his first-ever marathon in Little Rock on a drizzly Sunday — and won.

Drew Mueller, who ran cross country and track for Arkansas State University, said the hardest part was the hill at mile 25, where he said he almost started walking but managed to power through.

“I’ll try not to brag too much about it,” he said with a laugh.

Tia Stone, meanwhile, was again the fastest female runner, crossing the line in just under three hours Sunday. It marks her third marathon win in a row.

The 39-year-old ran cross country and track at Harding University “like 20 years ago” she said, and has lived in Searcy ever since.

Stone said she had been trying to beat three hours for the past two years and said she would have been happy without the win if she made that time, which she previously missed by less than a minute. The hardest part was getting up the hill Kavanagh Boulevard and keeping up with a competitor, she said.

Mueller finished with an unofficial time of 2:32:35.

Mueller said he’s been running for 10 years and trains with a club in St. Louis. He started Sunday’s race at a conservative pace to save energy at first, he said, since he had never run more than about 22 miles.

He said the light showers helped him keep cool during the race and that he enjoyed the scenic route.

Stone said the support of her family, including a daughter who runs middle school cross country, helped keep her going.

“They know how much I’ve trained for this and practiced running on hills for the last three months,” she said.

The crowed helped too, she added.

“I love this race so much,” she said.

Coming in second in the men's race was 31-year-old Benjamin Kopecky while 27-year-old Jeremy Provence finished in third.