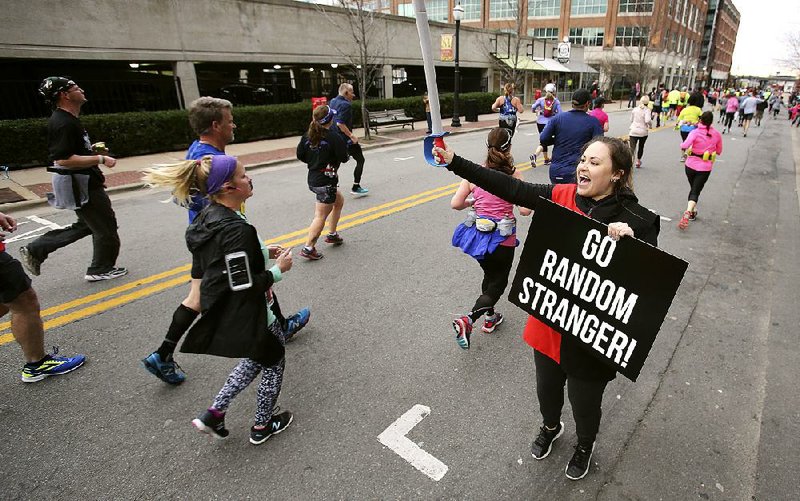 Maddie Qualls cheers on a group of runners on Third Street on Sunday during the 2018 Little Rock Marathon.

Arangoa, a marketing manager for a civil engineering company, has no problem saying she came to Little Rock for the huge medal given out to each finisher. “It’s the only race that has a medal of this caliber,” she said. “This is what got me on to this marathon. I saw the medal and said, ‘What is this race about? I have to do it. It’s going to be on my list.’ So I was able to work it into my schedule.” But in order to get that medal, she had to survive the hills on the course. “It was great, but those hills kicked my butt,” she said. “I’m from Savannah, Ga., and we have no hills.”

Blake said he enjoyed his third marathon, but training for it was difficult. “I ran cross country and track in high school at Siloam Springs,” he said. “I went to pharmacy school and then finally went back to running as more of a stress relief.” Preparing for a marathon, he said, is more demanding with a 2-year-old daughter. “It’s definitely a bit more of a challenge,” he said. “I’m a little more proud of this one, because it’s a little bit harder to train with a toddler running around.”

Dean has ran in every Little Rock Marathon, with Sunday marking her 16th occasion. “Once you start streaking, you don’t want to stop,” Dean said. The Arkansas State University physical education professor wasn’t always a marathoner. She recalled her first marathon in 1996 in Washington, D.C., where she qualified for the Boston Marathon in 1997. “I asked my friends, ‘How far is that one [Boston],’ ” Dean said. “I was such a newbie. I was completely dumbfounded.” Dean’s bib read “Run’NFree”, which she said means she avoids electronics while running. “I like to talk to people,” Dean said.

Rain fell on the runners during the early portion of the race, but Forrest said that was OK with him. “It was a little wet, a little soggy, but otherwise pretty good,” he said. “I walked on at Arkansas State and ran cross country and track for four years. So I’ve been wet running many, many times.” Forrest, a scientist at the University of Arkansas for Medical Sciences where he studies germs, had “Germ Man” on his identification bib.

Gifford, a three-time survivor of lymphoma thyroid cancer, ran in her fifth marathon in her fifth state Sunday. The Utah native also ran marathons in Arizona, Colorado, Tennessee and Utah. “It takes away my pain,” Gifford said. During her second bout with cancer in 2015, Gifford’s husband Randy died of a heart attack. “Running is my therapy,” Gifford said. Her goal is to run a marathon in every state. Next up for Gifford? A marathon in Nevada in April.

Hellhake said he was bored when his son Greg went to play baseball at Creighton in Omaha, Neb. So, he took up running. Hellhake said the medal, which weighs 2½ pounds and measures 8½ inches tall, was a selling point for him to run in Little Rock. He runs with the Heartland Road Runner Club, which is based in Quincy, Ill. Along with Hellhake, 15 Road Runners ran in the Little Rock Marathon. “We had a good time,” said Hellhake, who ran in his ninth marathon Sunday.

What led Hollidge to want to propose to his girlfriend, Cubberley, in Little Rock? “We were house hunting in England and we found a house that was called Little Rock,” Hollidge said. “Then I found out about the Little Rock Marathon.” The two English natives met while running with the Great Bentley Running Club in 2015. Cubberley said she told Hollidge to “put a rock” on her finger. “I didn’t think he was going to do it here,” she said. “But I always wanted him to propose.” Hollidge and Cubberley will leave today for a week-long vacation in Mexico. No date has been set for a wedding, but Cubberley said the wedding will have a running theme. Maybe the two runners will run down the aisle on their wedding day.

Ishiwatari has lost count of how many marathons he has competed in (he has raced in 13 states), but he said he will have no problem remembering the Little Rock Marathon. “This is my No. 1 [toughest], yes sir,” he said. “The hills are tough.” A fitness trainer and group fitness coordinator who moved from Japan to the United States for college and stayed, Ishiwatari said one hill in the latter stages of the race stood out. “The last hill after 25 miles, that was a killer,” he said. “But it has to be challenging sometimes. Earlier, I was talking to somebody and said, ‘OK, that should be the last hill.’ I was wrong. There was another one or two.”

Kearns, a kindergarten teacher at Pulaski Academy, said her friend Lytle was the one who gave her the running bug three years ago. “She’s the one who made me run,” Kearns said. She said that running has helped her get into better shape for her soccer league team. Kearns started training for the Little Rock Marathon after the 3 Bridges Marathon in Little Rock in December and set a personal best Sunday. “It was good, but cold,” Kearns said of the wet course conditions.

Sunday’s race was bittersweet for Kimes. “This is my last race,” she said. “It’s my fourth marathon, and I’ve always wanted to do this race just because of the hype of it. But I’ve been running with plantar fasciitis in my foot for two years, so this is my last one. I’ve retired to halfs.” Formerly a teacher who is now a stay-at-home mom, Kimes said her reasons to start running were simple. “I tried to stay in shape, have fun. It’s a stress reliever,” she said. “My running partner is trying to talk me out of [retiring] after some rest. It’s bittersweet, but I have other goals.”

Weather in her home state is not great for training, but Kuker said runners manage. “We have a big running group up there, and we all get together on Saturday mornings,” said Kuker, an education specialist in transfusion medicine. “We wear about 18 layers of clothes and just do it.” She said Sunday’s race was her 29th in 27 states. “Oh my gosh, I loved it,” she said. “It was hilly, yes, but perfect weather, great crowd support, awesome expo and after party. It’s one of the better ones, by far. I mean, look at this medal. I kind of do it for the bling as well.” She said she started running about seven years ago when a friend persuaded her to enter a half-marathon. A week later, the same friend entered her in a full marathon. “We ran the marathon together and I just got hooked,” she said. “I honestly thought I couldn’t do it. But when I crossed the finish line, I was still alive.”

Leonhardt, a biomedical engineer for a medical device company, said he was surprised to top his personal best Sunday. “I didn’t expect to today with all the rain and everything. But I’m very happy with it.” He is one of many runners trying to compete in a marathon in every state, and Arkansas was his 31st. “I’ve been running five or six years, and this was my 33rd overall,” he said. “I ran casually in college. I do it for fun.”

Massanelli used the Little Rock Marathon, her seventh time in the event and 45th marathon overall, as a preparation race for the Boston Marathon in April. She ran it two previous times, 2014 and 2016. On Sunday, she set a personal best time. Massanelli hopes to finish the Boston Marathon in 3:30, but the race is “more to have fun, to enjoy the city.”

Murphy said he didn’t start running until he was 40 years old, but he was hooked right away. “I hated running when I was in high school. I was in the band,” said Murphy, a mechanic at a Honda dealership. “But when I hit 40, I just started running and caught the bug. I enjoy talking to people when I’m running. You get to meet people from all over the place.” The Little Rock Marathon was No. 35 on Murphy’s list of states and his 51st overall. “This race is well-organized and well-marked,” he said.

Parker found two reasons to visit Arkansas: To see a longtime friend and run in the Little Rock Marathon. Parker’s friend Daniel Dykes is an associate pastor at Woodland Heights Baptist Church in Conway, and he arrived in Arkansas on Saturday to spend time with him. While Parker was in Little Rock, his wife Nancy is back in Florida watching their daughter Darla Hobby run a marathon. When Parker ran his first marathon in 1999, he wanted to break three hours. He didn’t, so he eventually told himself to be happy with whatever he does in a marathon. What did Parker think of Sunday’s course? “It’s a good course,” Parker said. “A little hilly. I’m a flat-lander, being from Florida. To us, those are hills.”

Russell said she struggled in Sunday’s race, but she knows why. “I was not trained as well,” said Russell, an accountant. “I’ve been working a little too much the past two months, and I haven’t gotten my training in. I train on hills, so the hills were not that bad. I think if I was properly trained, I would have been better off.” Of her four career marathons, Russell said Sunday was her third slowest. “I’ve been running off and on for 10 years, just to get in better shape,” she said. “Then I would have a child and stop running, start again, have another one, start again. Now I’m just back at running.”

Simmons admittedly was in some pain after crossing the finish line Sunday. “I had major surgery six weeks ago,” he said. “They had to remove a bunch of scar tissue from my intestines. I’ve got about a 10-inch scar right here on my stomach.” Did he think maybe he rushed his return to racing? “Yeah, I do now,” he said, chuckling. Simmons has competed in the Little Rock Marathon five consecutive years. “My son lives [in Little Rock],” he said. “I shamed him into running this marathon because I was running before he was. Now we’ve got to get my grandson running it. He’s 6.” Simmons now trains runners for marathons in addition to working as a buyer for a manufacturing company. “I wouldn’t know what to do if I retired. I would just get into trouble,” he said.

Running in his first marathon, Woods said he was surprised he felt so well. “I’m a little sore, but not bad,” he said. A mental health therapist originally from Hamburg, Woods did not start training until January. “It was a short window of time for training, but I pushed myself,” he said. “It was just something I decided to do, and I had always wanted to do it. This year was the year.”

Wurz, who ran competitively in high school at Bozeman, Mont., and at Hendrix College, has ran five marathons, each in the Little Rock Marathon. “I hear people talk about the hills, but I like the hills,” said Wurz, an occupational therapist. “I live in Hot Springs Village, and all we have are hills.”