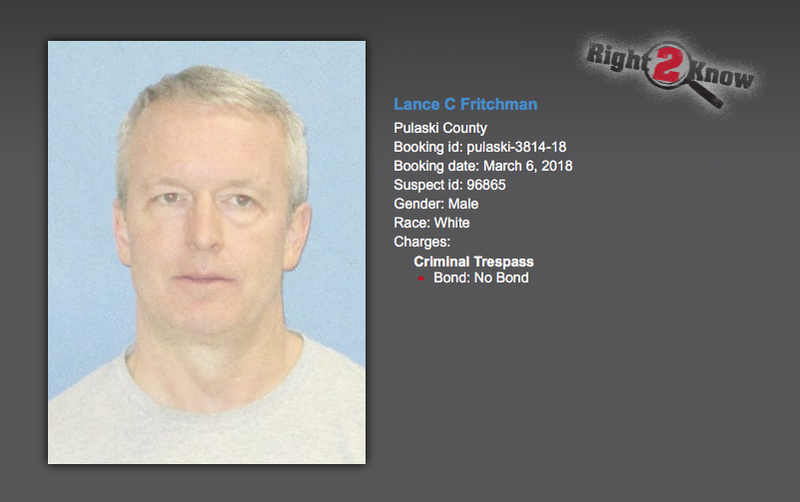 A Little Rock teacher has been arrested after a dispute with a TV news reporter who was questioning him on recent social media posts, police said.

Lance Fritchman, 52, was booked into the Pulaski County jail around 10:30 a.m. Tuesday on a charge of criminal trespass, records show.

The Little Rock School District’s McClellan High School lists Fritchman as a coach on its website.

According to a police report, Mitchell McCoy, a reporter at NBC affiliate KARK-TV and Fox affiliate KLRT-TV, had questioned Fritchman about social media posts that referenced race, among other topics.

Around 7 a.m. Monday, officers responded to the lower parking deck at the Victory Building, 1401 W. Capitol Ave., in reference to a terroristic threatening report.

Fritchman told police that he had gone to the building, which houses the TV news stations’ studio, as a result of McCoy’s reporting.

Fritchman was later told to not call the reporter and was barred from returning to the Victory Building, the report states.

Officers were called again around noon that day but were not able to locate the suspect, according to authorities.

A Twitter account bearing Fritchman's name features tweets questioning why there is no white history month and criticizing the looks of participants in marches for women's rights. Other posts mention McCoy and Max Brantley of the Arkansas Times, which first reported on Fritchman's arrest.

Pamela Smith, a Little Rock School District spokeswoman, said Fritchman had been placed on paid administrative leave before he was taken into custody.

"However, we have been made aware of [Fritchman's arrest] and are conducting further review. We are unable to comment on specifics as it is a personnel matter unrelated to LRSD," Smith said.

Fritchman remained at the Pulaski County jail as of 12:15 p.m. Tuesday, records show. Bail had not been set.