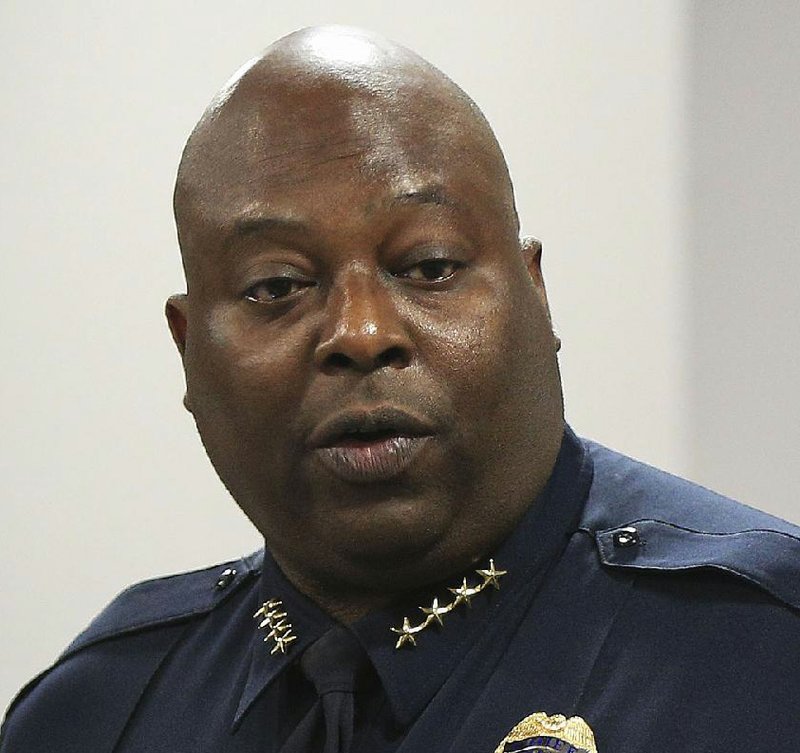 Little Rock Police Chief Kenton Buckner is staying in Arkansas' capital city, announcing Monday that he has withdrawn his name from consideration to lead the police force in Charleston, S.C.

Buckner, who started as head of the Little Rock Police Department less than four years ago, was named last month as one of five finalists for the Charleston police chief position.

In a visit to South Carolina last month, Buckner said applying for the Charleston job was a "no-brainer" and addressed the strained relationship between him and the Little Rock Black Police Officers Association, which has been consistently critical of his leadership.

Buckner, in a statement released Monday, said he received "daily local inquiries" about his status as Little Rock police chief since his visit to South Carolina.

"I realize this uncertainty can impact the effectiveness of my leadership as well as the future of the Little Rock Police Department," he wrote in the statement. "Alleviating that ambiguity is one of the reasons I believe that it is now the time to withdraw from the process and remove uncertainty regarding LRPD leadership."

Buckner, in the statement, said experiencing the interview process gave him a chance to reflect on his "time here in Little Rock."

Buckner wrote that there are goals he wants to see accomplished, including the completion of the accreditation of the department's training academy by the Commission on Accreditation for Law Enforcement Agencies, along with "strengthening relations" within the department and with the community.

"During this past month, I have received many words of encouragement from citizens and officers. I am excited to continue engaging those supporters as Little Rock moves forward. It is time to build on the positive momentum that the LRPD has achieved," Buckner said in the statement.

He pointed in the statement to a reduction in property and violent crime, along with the recent arrests of "several habitual offenders who have wreaked havoc in our community."

Police Executive Research Forum recruited applicants for the Charleston position. The salary in the job posting is $150,000 to $170,000.

In Little Rock, Buckner made $145,526 in 2017. Buckner on Monday declined to comment further on the statement.

John Gilchrist, president of the Little Rock Fraternal Order of Police, described Buckner as a man "married" to his work and said he welcomed his decision to stay in Little Rock.

Yet, he said it will not be the last time a job search headhunter will seek out Buckner, given his qualifications and education.

The Little Rock Black Police Officers Association has been openly critical of Buckner's leadership, a relationship the Little Rock chief addressed during his visit to Charleston.

Last summer, the association sent a letter to city leaders calling for an investigation into the "discrimination, inequities, and disparaging treatment of minority officers and supervisors" under Buckner's leadership.

Speaking in Charleston last month, Buckner said 40 percent of the people he has promoted have been black, even though black officers make up just 30 percent of the force. He also said he had doubled the number of Hispanic officers during his tenure from 11 to 21 or 22.

"But I do take some responsibility to say that I always have the opportunity for improvement," Buckner said, noting he "could have been potentially reaching further across the aisle" with black police association.

Sgt. Willie Davis, the first vice president of the association, said Monday that he does not see how the community will have confidence in Buckner's leadership going forward.

"We are not interested in him being here [any] more," Davis said.

Earlier this year, Davis said he received a 10-day suspension after not reporting a recruit's racial slur on social media to a department supervisor. Davis said he did inform the black police officers association of the racial slur and the organization sent a letter to Buckner expressing concern about the recruit.

Last month, Rodney Lewis, president of the Little Rock Black Police Officers Association, said there had been disagreements between the association and Buckner.

"Even if he doesn't get the job in Charleston, we still stand on our word to work with this chief and see if we can iron out the problems between our organization and him and the community," Lewis said.

Information for this article was contributed by Chelsea Boozer of the Arkansas Democrat-Gazette.