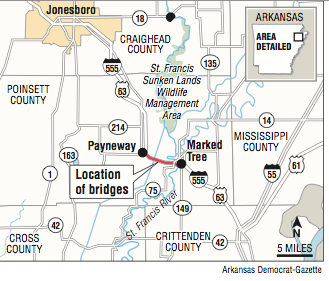 A map showing the location of Interstate 555 bridges

A $12.3 million project to redo the decks of 16 bridges on a 1.7-mile section of Interstate 555 in an area known as the Sunken Lands in Poinsett County is finally set to begin, nearly six months after the Arkansas Department of Transportation awarded the contract.

The project was delayed in part because work that was to be performed by the department's heavy bridge maintenance section had to be pushed back as a result of emergency work after two vehicle crashes in which state highway bridges were heavily damaged.

The vehicle crashes included a fatal one in June that shut the Harrisburg Road overpass on I-555. A crew from the heavy bridge maintenance section had four of the five lanes re-opened after one day, but additional work was needed to complete the repairs.

The other crash happened in November at an overpass on Interstate 55 north of Burdette.

The work on both bridges delayed the work that needed to be performed on the Sunken Lands bridges, the department said in a news release. And that work needed to be completed before the contractor, American Contracting Services Inc. of Jeffersonville, Ind., could begin its work.

The presence of state repair crews on the travel lanes would conflict with the contractor's need to perform work on the bridge decks, the department said.

"Therefore, in order to coordinate and efficiently perform all the necessary work on the bridges, the contractor has delayed work until mid-March at the request of ARDOT, when superstructure work by ARDOT crews is anticipated to be complete," according to a statement the department released Monday.

But while the bridges remain structurally sound, the driving surfaces long have been "rough and unsightly," according to the department, a situation exacerbated by recent rains. As a result, the department will be placing temporary asphalt pavement on some bridge decks to improve ride quality until the contractor can begin its work.

"The work that will begin in mid-March by American Contracting Services Inc. is a long-term solution to repair and restore the driving surface on these bridges," the department said.

The project, for which the contract was awarded in September, involves removing the top 2 inches of concrete through a process called hydrodemolition, which is extremely high-pressure water forced through small nozzles. A concrete overlay will be installed as the new driving surface, the department said.

The project is on a section of I-555 between Payne and Marked Tree in the St. Francis Sunken Lands Wildlife Management Area, a 26,000-acre "island" of bottomland and hardwood forest. The "sunken lands" resulted from the New Madrid earthquakes of 1811 and 1812.