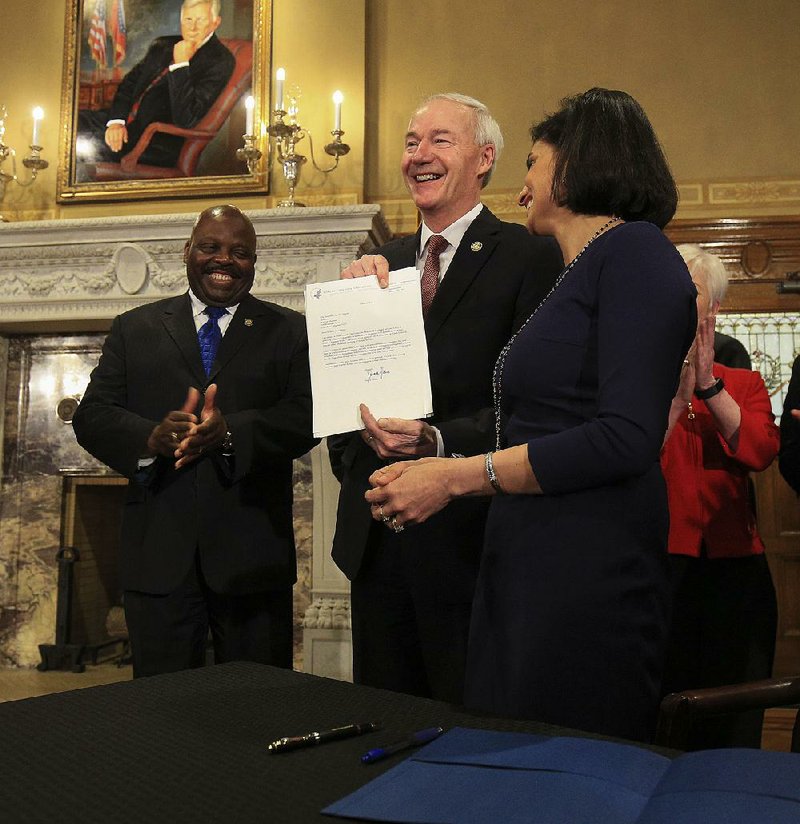 President Donald Trump's administration on Monday granted Arkansas' request to add a work requirement to its Medicaid expansion program but held off deciding whether the state can move about 60,000 people off the program by limiting eligibility to those at or below the poverty level.

The federal Centers for Medicare and Medicaid Services is "not at this time approving Arkansas' request" to reduce the income cutoff from 138 percent of the poverty level, agency Administrator Seema Verma said in a letter to Arkansas Department of Human Services Director Cindy Gillespie on Monday.

"We're continuing to work through the issues regarding that," Verma said at a morning news conference with Gov. Asa Hutchinson.

Hutchinson has been awaiting a decision from Verma's agency on his proposed changes to the expanded Medicaid program since legislators endorsed them last spring as a way to save the state money and encourage nonworking enrollees to find jobs.

Hours after the news conference, the Legislature's Joint Budget Committee approved the Human Services Department's $8.2 billion appropriation for its Medical Services Division, which includes spending authority for the coming fiscal year of the expanded Medicaid program, known as Arkansas Works.

Arkansas is the third state, behind Kentucky and Indiana, to be granted permission to impose a work requirement on Medicaid recipients.

But Hutchinson predicted Arkansas will become the first state to implement such a requirement when it goes into effect on June 1.

"This is not about punishing anyone, it's about giving people an opportunity to work," Hutchinson said.

[NEW: Sign up for the Arkansas politics and legislative updates email newsletter]

He predicted that the number of people losing coverage for failing to comply with the requirement will be "minimal."

"The first wave might be those that were marginal and probably didn't need to be on the system to begin with," he said. "This helps them to re-evaluate that."

Verma said her agency has received an "overwhelming response" from states that want to impose such requirements, which haven't previously been allowed in Medicaid.

"It's easy to just hand people a health insurance card, but it's a much harder task to help them make the changes to move them out of poverty and hopefully to a better life, to a new job that provides health insurance," Verma said.

Arkansas Works was covering more than 285,000 Arkansans as of Jan. 1. Most of the enrollees are covered by private plans offered on the state's health insurance exchange, with the Medicaid program paying the premium.

The requirement to spend at least 80 hours a month working or on other approved activities will apply this year to people enrolled in Arkansas Works who are ages 30-49 and next year to those ages 19-29.

Older enrollees will be exempt. People younger than 19 are covered under ArKids First, the state's Medicaid program for children.

Of the almost 99,000 enrollees who are ages 30-49, about 60,000 won't have to take action to meet the requirement because information in state records indicates they are already in compliance or are exempt.

Among the 69,000 people in the younger group, about 39,000 are already in compliance or qualify for an exemption based on state records.

Those qualifying for the automatic exemptions include pregnant women, people caring for dependent children and those considered to be "medically frail" based on their answers to questions about their health needs.

Enrollees will be considered in compliance if they earn at least $736 a month -- the average monthly income of someone making the state's minimum wage of $8.50 an hour and working 20 hours a week.

Others will have to use a state website to report whether they spent 80 hours during a month on work or other approved activities or qualified for for an exemption.

Enrollees who will have to use the website to report exemptions include those caring for an "incapacitated person," people who have a "short-term incapacitation," enrollees who are in drug and alcohol treatment and full-time students.

The website will go live March 30, and notices to enrollees affected by the requirement will go out early next month, Gillespie said.

Those who fail to meet the requirement for three months during a year will be terminated from the program and won't be able to re-enroll until the beginning of the next year.

However, they can enroll in Medicaid sooner if they qualify under a different category.

Enrollees can also have their Arkansas Works coverage restored retroactively if their failure to comply or report on their compliance resulted from "a catastrophic event or circumstances beyond their control," according to the terms of the Arkansas Works waiver, which were amended Monday to reflect the work requirement.

The Arkansas Foundation for Medical Care will help educate enrollees about the requirement under a $928,725 contract, department spokesman Amy Webb said.

She didn't have information on the website's cost, but another spokesman said last year that it was expected to be $2.5 million to $3 million.

The waiver's terms require the state to provide each enrollee whose coverage is terminated with "information on how to access primary care and preventative care services at low cost or no cost to the individual."

"This material will include information on free health clinics and community health centers, including clinics that provide behavior health and substance use disorder services," according to the waiver's terms.

The state is also prohibited from terminating any enrollees' coverage for noncompliance until the Centers for Medicare and Medicaid Services approves an eligibility and enrollment monitoring plan, which the state must submit to the agency within 90 days.

While he's concerned about lowering the income cutoff to the poverty level, he said it's "hard to say" whether the work requirement will cause a significant increase in the number of uninsured people seeking care at hospitals.

Marquita Little, health policy director for Arkansas Advocates for Children and Families, said the state should closely track the administrative costs associated with the work requirement and its effect on enrollees' coverage and employment.

"I don't think we'll probably see results that will justify what the costs will be," she said.

In addition to the work requirement, the Centers for Medicare and Medicaid Services granted Hutchinson's request to reduce retroactive coverage for Arkansas Works enrollees.

Previously, the program would cover up to 90 days of past medical bills for enrollees who are approved for coverage. The federal agency allowed the state to reduce the retroactive coverage to 30 days before the date of application.

Hutchinson had initially sought to reduce the coverage to the first day of the month when an application is submitted but agreed to modify the request in response to "stakeholder feedback," Hutchinson spokesman J.R. Davis said.

Verma said in the approval letter that she granted the request to test whether providing fewer days of retroactive coverage encourages potential enrollees to "obtain and maintain health coverage, even when they are healthy."