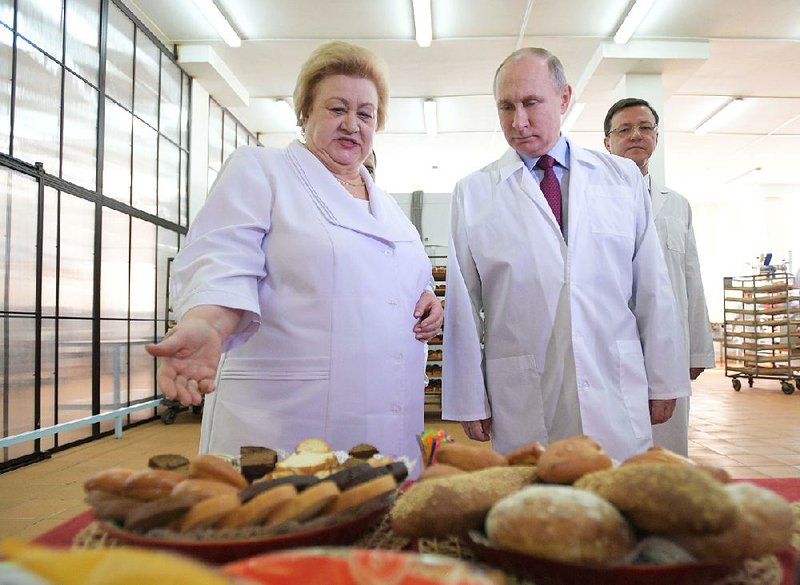 Russian President Vladimir Putin checks out bread and confectionery during a Wednesday visit to a factory in Samara, Russia.

MOSCOW -- Russian President Vladimir Putin lavished praise on President Donald Trump on Wednesday, but he added that he was disappointed with the U.S. political system, saying it has been "eating itself up."

Speaking in a series of interviews with Russian state television that were included in a documentary released Wednesday, Putin described Trump as a great communicator.

"I have no disappointment at all," Putin said when asked about the U.S. president. "Moreover, on a personal level he made a very good impression on me."

The two leaders met on the sidelines of international summits last year. Putin praised Trump as a "balanced" man, who easily gets into the gist of various issues and listens to his interlocutor.

"It's possible to negotiate with him, to search for compromises," Putin added.

He also noted that he spent some time talking to Melania Trump when he sat next to her during an official dinner at the Group of 20 summit in July in Hamburg, Germany. The Russian leader said he told her and the wife of the Italian premier "about Siberia and Kamchatka, about fishing ... about bears on Kamchatka and tigers in the Far East."

"I made some exaggerations," the action-loving Russian leader said with a grin. "When you talk about fishing, you can't help exaggerating."

Asked jokingly by the interviewer if he was trying to recruit the women, the KGB veteran responded by saying: "No, I stopped dealing with that a long time ago."

He added with a smile: "But I liked doing that, it was my job for many years."

Venting his frustration with the U.S. political system, Putin said "it has demonstrated its inefficiency and has been eating itself up."

"It's quite difficult to interact with such a system, because it's unpredictable," Putin said.

Russia-U.S. ties long have been strained by the Ukrainian crisis, the war in Syria and other issues, and Moscow's hopes for better ties with the U.S. under Trump haven't materialized. Tensions have escalated further amid the ongoing congressional and FBI investigations into allegations of collusion between Trump's campaign and Russia.

Speaking about the Russia-West rift, Putin said it has been rooted in Western efforts to contain and weaken Russia.

"We are a great power, and no one likes competition," he said.

He said he was particularly dismayed by what he described as the U.S. role in the ouster of Ukraine's Russia-friendly president in February 2014 amid widespread protests.

Putin said the U.S. had asked Russia to help persuade then-President Viktor Yanukovych not to use force against protesters and then "rudely and blatantly" cheated Russia, sponsoring what he called a "coup."

"Few expected us to act so quickly and so resolutely, not to say daringly," Putin said.

He described the Western sanctions over Crimea and the insurgency in eastern Ukraine as part of "illegitimate and unfair" efforts to contain Russia, adding that "we will win in the long run."

"Those who serve us with poison will eventually swallow it and poison themselves," he said.

Putin wasn't speaking in the context of a former Russian spy who was left in critical condition, along with his daughter, after coming into contact with a mysterious substance in Britain. Analysts have suggested that it was a poisoning in which Russia may have had a hand, even though British authorities haven't revealed what the substance was and are still investigating. Moscow has denied any involvement.

Responding to a question about Russia's growing global leverage, Putin responded: "If we play strongly with weak cards, it means the others are just poor players, they aren't as strong as it seemed, they must be lacking something."

Putin, who presented a sweeping array of new Russian nuclear weapons last week, voiced hope that nuclear weapons will never be used -- but warned that Russia will retaliate in kind if it comes under a nuclear attack.

"The decision to use nuclear weapons can only be made if our early warning system not only detects a missile launch but clearly forecasts its flight path and the time when warheads reach the Russian territory," he said. "If someone makes a decision to destroy Russia, then we have a legitimate right to respond."

He added starkly: "Yes, it will mean a global catastrophe for mankind, for the entire world. But as a citizen of Russia and the head of Russian state I would ask: What is such a world for, if there were no Russia?"