Cigna to buy Rx manager for $67B 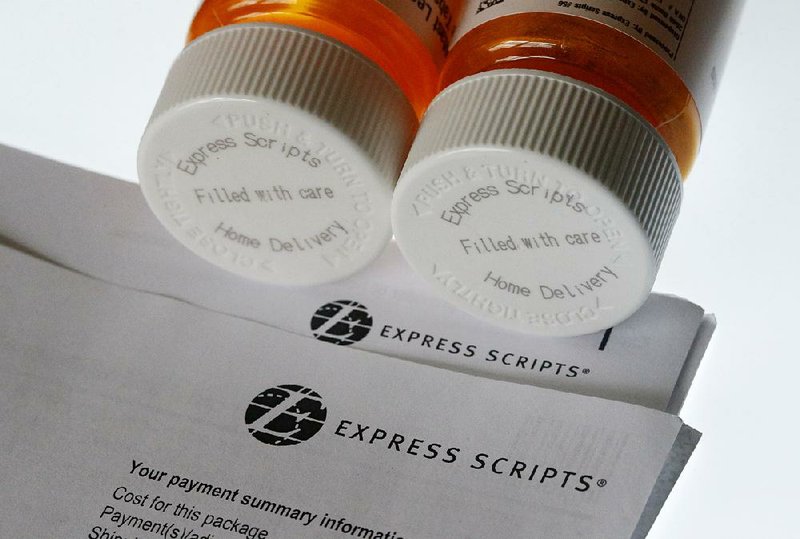 Express Scripts medication bottles are displayed in 2017. Express Scripts’ merger with insurer Cigna is the latest in a string of proposed health industry buyouts and tie-ups.

In another mega deal to reshape the business of negotiating drug prices, health insurer Cigna said Thursday that it will acquire Express Scripts Holding, the nation's largest pharmacy benefit manager, in a package valued at $67 billion.

The new deal is significant because it will bring Express Scripts, the last major stand-alone pharmacy benefit manager, under the umbrella of an insurer. Express Scripts has about 3,000 clients, including employers, health insurers and government health plans, and serves about 83 million Americans. Cigna has 15.9 million medical members across the globe.

The companies say the deals reflect an evolution in health care toward a payment system that is linked to people's health outcomes and keeping people well.

In an interview, Cigna chief executive David Cordani gave the example of a woman who becomes injured at work and is prescribed painkillers. Separately, the patient may become depressed and be prescribed psychotropic medications, unbeknownst to her primary care doctor. The combined company, he said, would be able to use real-time data to flag such cases and "complete a picture of the whole person -- and help that primary care physician more actively treat the mind and body, potentially modify her pain management," Cordani said.

The pharmacy benefit management industry is in upheaval just as it has become a target of criticism over the role it plays in drug prices. The current financial incentives could lead pharmacy benefit managers, which make money off the drug discounts they negotiate, to prefer drugs with high list prices and high rebates, instead of lower prices.

In a speech this week at a national conference organized by the health insurance lobby, Food and Drug Administration Commissioner Scott Gottlieb criticized the consolidated pharmacy benefit management industry and lashed out against a system "that obscure[s] profit taking across the supply chain that drives up costs; that exposes consumers to high out-of-pocket spending; that actively discourages competition."

"The savings may not always be passed along to employers or consumers," Gottlieb said.

A paper released by the White House's Council of Economic Advisers in February highlighted concerns about how concentrated the industry had become, with three pharmacy benefit managers accounting for 85 percent of the market.

Four of the nation's largest health insurance companies have tried in the past to grow through mergers with one another -- and failed because of antitrust concerns. In contrast, these vertical mergers that bring together companies with different health care functions have been seen as having a better chance.

"Now, if I make an investment to increase my drug spending, with the hope that it flows back to lower medical spending in the future, I know that I'm going to benefit from that," said Craig Garthwaite, an associate professor of strategy at the Kellogg School of Management. "If you think about a world where we want to pay for the effect of the drugs on medical outcomes, that's harder to do with an external PBM."

The total scope of the deal is $67 billion, including about $15 billion of Express Scripts debt.

The deal could be closed by the end of the year, subject to shareholder and regulatory approval. The outcome of the ongoing antitrust review of the CVS-Aetna deal could reveal if there are any problems for Cigna and Express Scripts, but several Wall Street analysts did not predict meaningful antitrust issues.

Garthwaite pointed out that the deal could theoretically reduce competition by making it harder for new health insurance companies to enter the space, because they might also have to set up their own pharmacy benefit manager business from the get-go.

David Balto, an antitrust lawyer who has opposed the CVS-Aetna deal and other health insurance mergers, argued that the new deal could mean trouble for CVS-Aetna.

"This significantly raises the risk that both deals are going to be challenged," Balto said. "If you look at the past, when an industry begins a rapid trend to consolidate, that puts the antitrust authorities on high alert."

Gerard Anderson, a professor at Johns Hopkins Bloomberg School of Public Health, worries that large employers will have less choice when they are looking for health benefits. Instead of shopping around for prescription drug benefits and health benefits separately, they will find that the pharmacy benefit managers are all tied to insurers.

Express Scripts will continue to serve health plans and large employers who want to purchase a prescription drug benefit separately from a health plan, Tim Wentworth, the chief executive of Express Scripts, said.

The two companies say the deal will expand choices, simplify health care and better align incentives to pay for and provide care that keeps people healthy. Cordani will lead the merged company.

Print Headline: Cigna to buy Rx manager for $67B