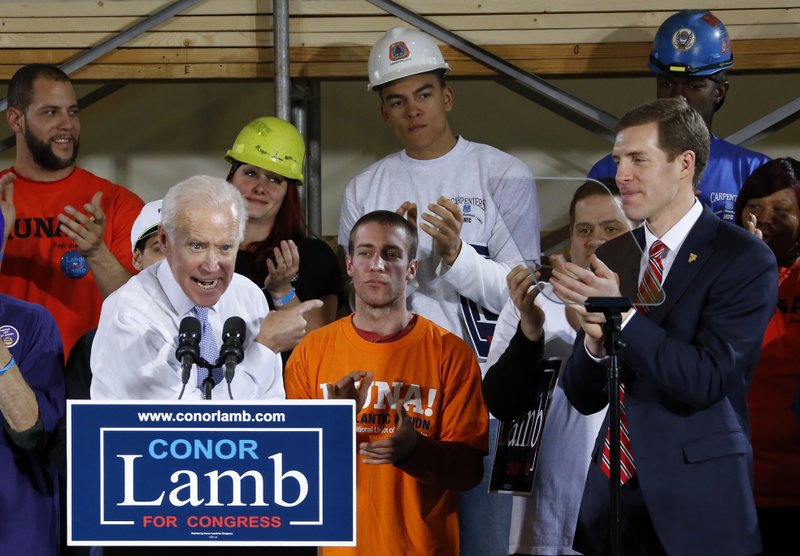 In this March 6, 2018, photo, former Vice President Joe Biden points at Conor Lamb, right, the Democratic candidate for the March 13 special election in Pennsylvania's 18th Congressional District, during a rally at the Carpenter's Training Center in Collier, Pa. Fighting to stave off another special election embarrassment, the White House is strengthening its final-days offensive in western Pennsylvania. (AP Photo/Gene J. Puskar)

Conway acknowledged that she was the "warm-up band" for the White House's final-days push to preserve a Republican congressional seat in Pennsylvania's 18th District, a working-class region that stretches from the Pittsburgh suburbs to the West Virginia border.

The president is scheduled to attend a local rally Saturday, followed by his son, Donald Trump Jr., on Monday.

Saccone, a 60-year-old state representative, has wholeheartedly embraced Trump throughout his campaign. In the 2016 election, Trump carried the region by nearly 20 percentage points. Yet with the election just days away, polls suggest that Saccone is essentially tied with Lamb, a 33-year-old Marine and former federal prosecutor who has never before run for office.

The White House is not taking any chances in the latest Trump-era special election.

Democrats have overperformed in virtually every contest across the country since Trump took the White House. And the sting of the GOP's December defeat in Alabama's special Senate race, in which Trump lent his name and time to failed Republican nominee Roy Moore, is still fresh.

Beyond surrogates, the Republican National Committee, which is the White House's political arm, has spent more than $1.1 million so far to support Saccone, said committee spokesman Rick Gorka.

Other national groups allied with the GOP have spent nearly $8 million on advertising in the race, which is more than seven times the amount invested by national Democratic allies not affiliated with the Lamb campaign.

Conway lashed out at Lamb as "extreme" on abortion, seizing on his opposition to a ban on abortions after 20 weeks of pregnancy.

"Most pro-choicers say they're for reasonable restrictions. But the Democratic Party platform is not. It essentially is abortion for anyone, anytime, anywhere," Conway said.

Lamb has said he personally opposes abortion as a Catholic, but he supports a woman's right to choose as set in law.

The Office of Special Counsel said Conway violated the Hatch Act twice last year when she spoke out in support of Moore in Alabama's Senate race.