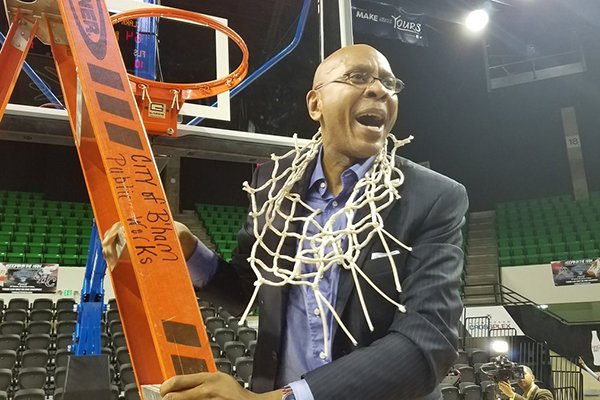 The two seasons before Darrell Walker was hired as Clark Atlanta University's basketball coach, the Panthers were a combined 15-40.

In Walker's two seasons, the former Arkansas Razorbacks All-American guard has led Clark Atlanta to a 45-17 record and back-to-back appearances in the NCAA Division II Tournament.

"I've proven to a lot of people that doubted me that I can coach in college," Walker said. "I just needed somebody to give me the opportunity."

Walker, 57, played and coached in the NBA for 20 seasons, including stints as a head coach for the Toronto Raptors from 1996-1998 and Washington Wizards in 2000.

After being let go as a New York Knicks assistant in 2014 when Mike Woodson was fired as coach, Walker hoped to land a college job.

Coaching in college was a big reason Walker completed his bachelor of education degree in human resource management and graduated from Arkansas in 2012.

But when Walker interviewed for college jobs, he kept hearing the same reason for why he wasn't hired.

"I had a lot of athletic directors tell me, 'You've got a great resume, but you've never coached in college,' " Walker said. "I had coached at the highest level in the NBA, but that didn't seem to mean anything to anybody.

"A lot of times I heard, 'Well, you've got to learn the [NCAA] rules. What I said to myself was, 'You've got guys that have been coaching for 20 years and they're still breaking the rules.'

"I said I would never do anything without calling my compliance guy if I wasn't 100 percent sure.

"It was frustrating for a little while, but I got past it."

One of Walker's friends, Atlanta artist Kevin Cole, told him about the opening at Clark Atlanta and encouraged him to apply for the job.

Clark Atlanta Athletic Director Lin Dawson, a former tight end for the New England Patriots, said that when he first saw the email from Walker, he thought someone might be pulling a joke on him.

After Dawson confirmed the email was from Walker, the former NFL guy decided to hire the former NBA guy.

"I assumed he knew the X's and O's," Dawson told the Atlanta Journal-Constitution. "That really wasn't what we needed.

"What I was looking for was mentorship. People who could hold our student-athletes accountable, someone who was a good fit for the campus community and someone who had a story beyond basketball."

Walker said he takes pride in helping his players win academically as well as on the court.

"I have all of my players' schedules, and I go check their classes," he said. "If you're not in class, you have to come see me at 5 o'clock in the morning in the gym."

Early-morning running to convince players to stop cutting classes is a motivational tactic Walker learned from Eddie Sutton, his coach at Arkansas.

It worked on Walker, and he said it's working on his players now, too.

"Last year I had four guys test me and they had to end up running," Walker said. "That got their attention.

"After they went through that four or five times, they figured out, 'Why would I get up at 4 o'clock in the morning and come see Coach at 5 o'clock instead of getting up at 8 o'clock and going to my 9 o'clock class?'

"This year, nobody has tested me."

Walker, an avid art collector since the early 1990s, also has made sure his players are able to attend summer school -- and stay on schedule to graduate within four years -- by raising about $200,000 through auctions of work donated by friends who are artists.

"It's important that my guys graduate," Walker said. "There's not many guys playing Division II basketball that are going to the NBA, let's just be honest about it.

"So I'd be doing an injustice to your son if he played for me and he didn't leave here with a degree."

Walker said when he was passed over for other college jobs, he kept hearing that as a former NBA player and coach used to flying on chartered jets and staying in five-star hotels, he wouldn't be able to adjust to a lifestyle that included riding buses to games and staying in more modest accommodations.

"I grew up in the southside ghetto projects of Chicago, so I knew how it was to not have anything," Walker said. "When I did get some things in life, I still knew where I came from.

"If you want to coach, you don't worry about bus rides. I'm having a ball with my team. Am I staying at the Four Seasons Hotel? No, but the Hampton Inn is fine. They've got cable channels and I can watch college basketball games."

Walker splits his time between Atlanta and Little Rock, which throughout his NBA career remained his offseason home with his wife, Lisa, a former All-American sprinter at Arkansas.

Lisa visits her husband in Atlanta, but continues to live in Little Rock to be near the couple's four grandchildren -- with a fifth on the way.

Walker said he's been fortunate to play for several top coaches, including Sutton, Gayle Kaundart at Westark Community College and Phil Jackson, Chuck Daly and Wes Unseld in the NBA.

"I've really taken something from all of those guys," Walker said. "Then I implemented it into my own style."

It's a style Walker has proven fits the college game.