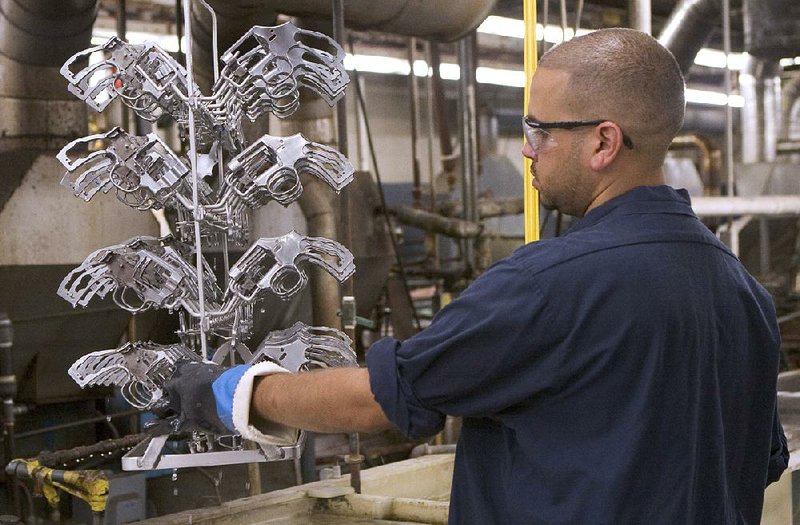 A worker guides a rack of snub-nosed revolver frames through several purifi cation baths at the Smith & Wesson plant in Springfi eld, Mass., in 2006.

In a head-spinning contradiction, famously liberal Massachusetts -- with among the strictest gun-control laws and the lowest shooting-death rate -- is the king of guns. By the latest federal tally, Massachusetts accounted for a quarter of the 11.9 million firearms made each year, more than any other state, according to Small Arms Analytics, an industry research firm.

Springfield is the unofficial capital of "Gun Valley," the chain of factories and suppliers that extends from Smith & Wesson and Savage Arms in western Massachusetts to Sturm Ruger & Co. and Colt in Connecticut.

But Massachusetts residents can't walk into a local gun shop and buy the latest Smith & Wesson's M&P15 "modern sporting rifle," as the company prefers to call it. By and large, Springfield's elected officials favor those restrictions, and even the town's economic boosters like to de-emphasize an export that contributes to 13,000 homicides a year in the U.S.

Kevin Kennedy, Springfield's chief economic development officer, calls Smith & Wesson a "good citizen." But he likes to shift the subject to a planned MGM Resorts International casino, which will become the city's biggest employer. Smith & Wesson has slashed its manufacturing workforce by a quarter over the past year. It now employs 1,000 or so, according to Kennedy.

The camera hovers for a split second over Smith & Wesson headquarters, described only as a "legendary manufacturer." It quickly moves to the parking lot, where cars are sheltered under an array of solar panels. "Innovative Solar Project," it reads, as if Smith & Wesson were in the green energy business.

Symbolizing its isolation, Smith & Wesson's headquarters, a prisonlike beige-brick compound encircled by high fences and barbed wire, literally stands apart from much of the city of 150,000 and isn't open to the public. The company, now officially called American Outdoor Brands Corp., declined to comment.

Just outside the city limits, Walter Lamon sells guns at Culverine Firearms, where photos of soldiers adorn a store packed with boxes of Smith & Wesson revolvers.

His business, like Smith & Wesson's, boomed under President Barack Obama because of fears of gun confiscation and fell under National Rifle Association booster Donald Trump. Shares of American Outdoor Brands have lost almost two-thirds of their value since the 2016 presidential election.

Lamon, 70, loathes Massachusetts Attorney General Maura Healey, a Democrat who tightened the state's assault weapons ban. A photo of Healey, with a hand-drawn Hitler mustache, hangs on a wall. "Heil Healey," it reads.

In Massachusetts "the gun industry and people like me are vilified," Lamon said. "That's because the majority of folks have a more liberal bent."

For almost a decade, David Upton, 34, managed orders for Smith & Wesson. Even in romance, he experienced the gun divide. When he was dating, some women recoiled in horror at his employer, while others would ask if he could take them shooting.

"The joke when I was there is that we can't sell 90 percent of the guns we make to people who live in the state," he said.

Upton, who now works at a craft brewer, said his old job has since moved to gun-friendly Missouri. In fact, Massachusetts may be losing its status as a gun leader, as manufacturers ship operations to the South and Southwest, according to Jurgen Brauer, Small Arms Analytics' chief economist.

"Increasingly, these kinds of companies feel they're in a little bit of a foreign land culturally," Brauer said. Employees bristle at being "constantly affronted by anti-gun sentiment when they go to church or the grocery store."

Springfield's firearms focus dates to the Revolutionary War, when George Washington selected the city for the nation's first armory, which functioned as a U.S. Army gun factory for almost two centuries.

There, inventors transformed the muzzle-loading rifle of the Civil War era into modern breech-loading weapons and then World War II's signature M1 Garand rifle. For the Vietnam War, the armory was the site of testing for the M16 rifle, the military version of the AR-15.

A half-mile away, the Springfield Museums offer visitors the Smith & Wesson Gallery of Firearms History. Sponsored by the company, it features 1890s pistols engraved by Tiffany jewelers and a prized nickel-plated .357 Magnum.

"For mechanical skill, strength, accuracy and penetration they are unxcelled," reads, in all capital letters, an early Smith & Wesson ad featuring a man in a cowboy hat and handle-bar mustache.

Bud Williams, a former schoolteacher and probation officer, focuses less on the history of guns and more on their impact today. As a state representative, his district includes Smith & Wesson. More often than he likes, he finds himself comforting the families of gunshot victims in a city whose violent crime rate rivals Chicago's.

"This is supposed to be a civilized society; why are there so many guns?" he asks.

To take guns off the streets, Williams, a Democrat, is planning a buyback program. In 2013 and 2016, such efforts netted hundreds of guns that were later destroyed -- though a handful of the most valuable are stored at Springfield's famed armory, now a museum run by the National Park Service.

In other words, Springfield celebrates, manufactures, sells -- and destroys -- guns.