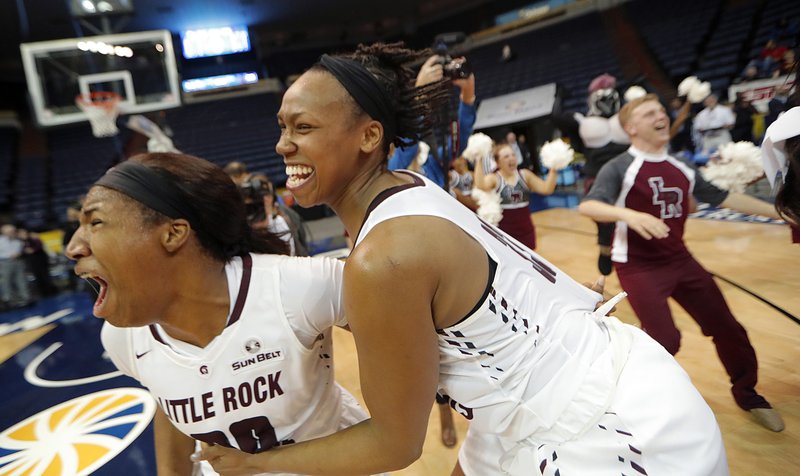 NEW ORLEANS — Monique Townson scored 17 points and top-seeded University of Arkansas at Little Rock advanced to the NCAA Tournament for the fifth time in program history with a 54-53 victory over Texas State on Sunday night.

UALR played in the Sun Belt Conference Tournament championship game for the eighth time and first since 2016. The Trojans have won four Sun Belt tourney titles — the most by a current member.

UALR built a 21-point lead midway through the third quarter on a 3-pointer by Tori Lasker but Texas State scored the next nine to stay in it. Texas State only scored 20 points in the first half but added 17 in the third to pull to 48-37.

A 13-0 fourth-quarter run put Texas State into a tie at 50 on Zelor Massaquoi's layup, but the Bobcats only made one basket in the final four minutes.

Texas State's Toshua Leavitt was called for a travelling violation at 50.9. UALR broke the full-court pressure and dribbled down the clock but Townson missed a baseline shot at 17.6 and Massaquoi secured the defensive rebound.

Sun Belt player of the year Taeler Deer had a decent look at a contested driving layup but it was too strong and bounced off with 1.1 seconds left. UALR inbounded it twice after a foul to wind down the clock.

Deer finished with 20 points on 7-of-22 shooting for Texas State. Leavitt added 11 points and Brooke Holle 10.

UALR has kept its opponents below 40 percent from the field in 20 of the last 22 games as Texas State was held to 35.2 percent shooting.