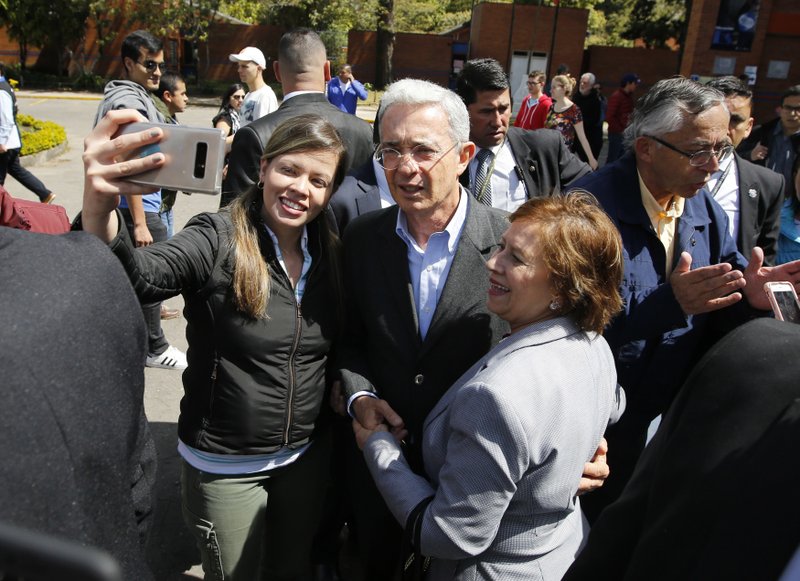 Colombia's former President Alvaro Uribe, who is running for Senator with the Democratic Center Party, poses for a selfie with supporters as he accompanies his party's presidential candidate Ivan Duque to a polling station during legislative elections in Bogota, Colombia, Sunday, March, 11, 2018. Colombia will hold presidential elections in May. (AP Photo/Fernando Vergara)

Analysts see the balloting for the Senate and House of Representatives as a test of the democratic viability of the political party that emerged from the Revolutionary Armed Forces of Colombia, which fought the state for 52 years until a historic peace deal in 2016. The new party has the same Spanish initials as the rebel group: the FARC.

Support for their agenda was soundly defeated, with party candidates getting less than 0.5 percent of the overall vote. That means their political party will get only the 10 seats guaranteed them by the peace accord.

"The FARC are in a tough spot," said Leon Valencia, a former combatant who now runs the Peace and Reconciliation Foundation, a think tank. "A long war has generated lots of fear and rancor towards them."

By contrast, many of the accord's critics picked up seats, with the Democratic Center party led by former President Alvaro Uribe headed to being the biggest bloc in the Senate.

President Juan Manuel Santos' coalition, which supported the peace deal, struggled. His Party of National Unity, which was the biggest political movement in the outgoing congress, finished fifth overall.

Sunday's election also included two presidential primaries, one for leftist candidates and another for candidates backed by conservative movements.

Uribe's hand-picked presidential candidate, Sen. Ivan Duque, easily swept the conservative primary, in which more than 5.8 million people voted -- a bigger haul than either of the top two finishers got in the first round of the 2014 presidential election.

Duque has said that while he would not "thrash" the peace accord with the rebels, he would attempt to modify certain aspects, like a provision that allows the former rebels with drug-trafficking convictions to participate in politics. He has also called for tougher controls on the group's finances.

Sergio Guzman, a political analyst at Control Risks, said that while Duque's vote tally was impressive, it is still too early to tell whether he will win the May 27 presidential election. Voters who are critical of the peace deal will be able to choose between Duque and German Vargas Lleras, the conservative leader of the Radical Change party. The pro peace deal vote is currently split among Gustavo Petro, Sergio Fajardo and Humberto de la Calle.