Roads less traveled: Cyclists are veering off paved roads and onto dirt and gravel, thanks to a hot new style of bicycle 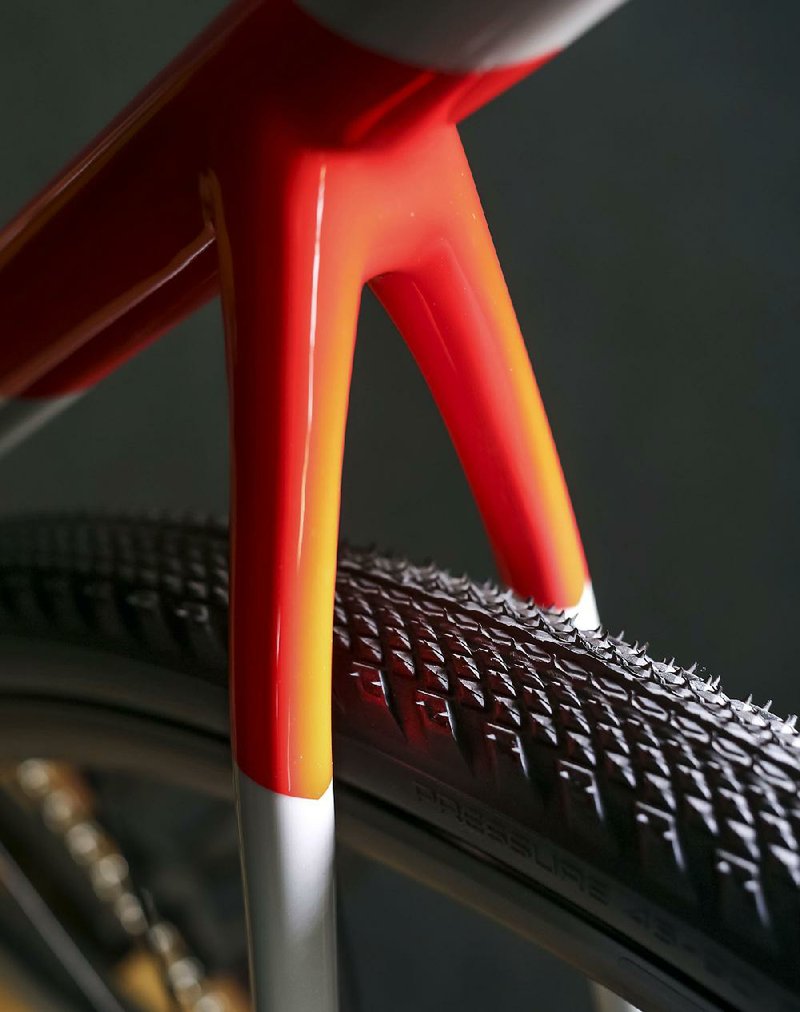 Tires for gravel bikes are wider and often have more tread than those found on typical road bicycles.

Not all roads are paved. Some are made of dirt, and there are miles and miles of these roads snaking across the Arkansas landscape.

The wily cyclist knows this, and also knows that there are bicycles made to traverse paved and earthen routes. They're called gravel bikes (or adventure bikes, or all-road bikes) and they're expanding the possibilities of where a road bike can go.

"It's like a new style of SUV," says Richard Machycek, owner of Arkansas Cycling and Fitness in Little Rock and Sherwood. "They're for someone who maybe isn't comfortable riding on the road, or they ride the road and they want a different experience."

The term gravel bike came into vogue about five years ago, says Jared Hintergardt, co-manager at Highroller Cyclery in Fayetteville, but bikes like them have been around for more than a century, mostly in the form of cyclocross bikes.

Cyclocross. It's is a type of bicycle racing first popularized in Europe in the early 1900s, when cyclists would race modified road bikes across fields during the winter. A new sport blossomed as did a new kind of bicycle -- the 'cross bike -- that looked like a road bike but was made mostly to be ridden across muddy fields.

More recently, "people were taking their cyclocross race bike and using that as their gravel bike," Hintergardt says.

Tony Karklins, founder of HIA Velo, the Little Rock-based company that makes carbon fiber bicycles under the Allied Cycle Works brand (HIA stands for Handmade in America), notes that pro road racers now compete in events such as Italy's Strade Bianche that have long stretches of gravel, which in turn has inspired weekend-warrior-type roadies.

"It was pure road racers doing it. That planted the seed in road cyclists' minds that this was cool," says Karklins, whose company makes a gravel-centric bike called the Allied All Road.

There are also U.S. races, such as the long-running Rouge Roubaix in St. Francisville, La., that feature gravel and dirt sections, and purely recreational rides, such as the Arvest Dirty Fondo, a 50-mile dirt and gravel ride May 6 at Scott.

A RIDE WITH A VIEW

A change of scenery and a desire to get away from speeding vehicles have sent many roadies in search of calmer places to ride and a proper bike to use on these roads less cycled.

"More people started taking road bikes off-road, and this is happening at the same time in the market when there is a conflict between cyclists and automobiles," Karklins says. "Road cyclists finally said, 'We're going to ride off-road as well.' It's beautiful and it opens up more and different and more challenging types of cycling."

Hintergardt and his friends started hitting the gravel and dirt in Northwest Arkansas seven or eight years ago.

"One of the big reasons we started was for the adventure," he says. "You can see a lot of different terrain that you don't get to see when you're just on the [pavement]. And now you can mix road and gravel together and you're not really hindered when you're on the road.

"But in the last few years, one of the biggest reasons a lot of us are riding more gravel than traditional road is distracted drivers. I'll still get on my road bike early on a Sunday morning, but from my house I can be on a dirt road in 2 1/2 miles and not have to fight cars."

Machycek notes that the gravel roads crisscrossing the Ouachita National Forest in central Arkansas near Lake Sylvia are a treasure, and the dirt farm roads of the Delta are ripe for exploration.

"It's so much fun to go out there. It's just beautiful," he says of the Lake Sylvia area. "Also, you're not going to get passed at 60 mph by a car. And then there's the beauty of some of the places you can go that you wouldn't normally go on your road bike. It's something new and something exciting."

It can also challenge the skills of someone used to riding on pavement, which offers a much more consistent surface than dirt.

"If you're on a dirt road or a gravel road and it's rainy, there are puddles and mud and loose spots, so you need to be a little more adventurous," Karklins says.

Bike makers and their marketing departments took notice of all this dirt road action, tweaking bikes and ad campaigns to appeal to a new branch of consumers.

"It is the boom category right now in American cycling," Karklins says.

According to Bicycle Retailer and Industry News, gravel bikes added $26.9 million in new business in 2017 and was one of only six categories of bicycle to show sales growth last year. There are at least two Arkansas-based Facebook groups for gravel riders -- Central Arkansas Gravel Rides and NWA Gravel Grinders.

Over time, manufacturers began modifying bikes to accept wider tires on a more road-bike-type build, which makes the bicycle more stable and comfortable for riders interested in spending more time in the saddle and mixing their road riding with dirt adventures. Frames, which are generally made from carbon fiber, aluminum or steel, were also designed to be less rigid, and some even come with suspension elements to make the ride smoother.

"Gravel is potentially an all-day deal, so you don't want a bike that is so danged punishing," Machycek says. "You want a bike with a more relaxed [frame] geometry so it doesn't steer so quickly, and you want a compliant frame."

A gravel bike's tires are different from a regular road bike's.

"Bikes are being made to hold bigger tires," Hintergardt says, and bigger tires are a big deal, helping gravel bikes hit the sweet spot in performance on pavement and dirt.

Typically, road bike tires are skinny, about an inch wide at best, which is great for the pavement but bad news on gravel and dirt, where the surface is inconsistent and bumpy and rocks can shred a regular tire like a chainsaw through a tree stump.

Gravel bikes have tires that have been on a diet of ice cream and candy bars, bulging to 1 1/2 inches or more. It may not sound like much, but they require far less tire pressure, making the ride a bit cushier and also helping prevent flats.

"Five or 10 psi makes a big difference when you're spending five or six hours riding over gravel in how comfortable you're going to be," says cyclist Alex Roberts of Farmington.

Little Rock's Steve Shepherd, while out on a ride in February, said, "The wider the tire, the less pressure you need to prevent [pinch flats]."

A pinch flat occurs when the wheel is rolling over a sharp edge and the bottom of the tube is caught between the tire and the rim, pinching the rim hard enough to pierce the tube.

On his road bike, Shepherd pumps his tires up to about 90 pounds of pressure per square inch, while that figure is about 50 psi on his gravel bike.

"And with the narrow tire, even if you're running higher pressure, if it gets a little rocky, you're still running the possibility of getting a [pinch] flat," he says, not to mention having your fillings rattled out of your mouth by the rough ride.

Roberts takes it even further. One of his bikes is made by the Colorado-based company Reeb and can be outfitted with tires 2 inches wide.

"It's what some people would call a monster 'crosser," he says. "It's a slightly beefier gravel bike."

A recent development on the road scene is disc brakes, which are de rigueur on gravel bikes. Discs are generally superior to the rim brakes found on older bikes and make stopping easier when conditions are muddy and wet.

When Karklins started HIA Velo and Allied Cycle Works, a gravel-style offering was in the plans from the beginning. Once a standard for disc brakes was established, the All Road, which leans toward the performance side of the gravel game, hit the market.

"We had to wait for that to occur before we could start our product development so that when we launched our bike, it would have the most modern disc brake standards," he says.

Mountain bikes live to be taken off-road, but aren't the most efficient on pavement. They're heavier, for one thing, and they have a flat handlebar, which limits the rider's options for hand positioning and can lead to discomfort on long rides. Gravel bikes, with their road-style, drop handlebar, allow riders to change hand positions, which helps prevent fatigue.

"A lot of people think drop bars means it's a racing bike," Machycek says. "It's really about multiple hand positions for being in the saddle all day."

Riding hither and yon off pavement means that there aren't many places to stop and refuel. A rider needs to be prepared in the event of a breakdown. Roberts says he carries two spare tubes in case of a flat, and also makes sure to carry extra water.

The Specialized-made Diverge gravel bikes that Machycek and Hintergardt sell in their stores, as are many others, have mounts for a third water bottle to be carried on the frame for longer rides.

Some gravel bikes even can be outfitted with fenders and loaded with special bags for bike-packing camping trips or multiple-day tours.

For a growing breed of riders, the diversity offered by gravel bikes makes them the perfect conveyance for all-around riding.

"Road riding is associated with suffering and racing," Hintergardt says. "But you can buy something like an adventure bike, or a gravel bike or an all-road bike and have a bike that you can just go ride. I want to step out of my door and ride wherever I want. If there's a dirt road that connects to paved roads with low traffic, awesome. Or I can ride predominately gravel and I have roads that connect to that, too."

Print Headline: Roads less traveled: Cyclists are veering off paved roads and onto dirt and gravel, thanks to a hot new style of bicycle