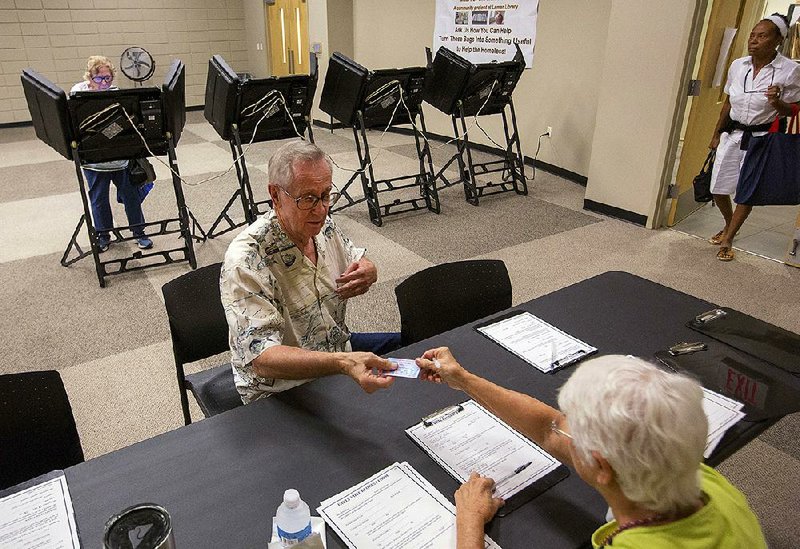 Ken Bushe hands a photo ID to a poll worker at Laman Library in North Little Rock during voting for a North Little Rock sales-tax increase in August. It was the first election after the voter-ID law went into effect.

A 7-month-old law that requires Arkansas voters to show a government-endorsed photo identification to ensure that their ballot is counted goes before a judge today for the first test of its legality.

Longtime Pulaski County poll worker Barry Haas, represented by Little Rock attorney Jeff Priebe, has asked Pulaski County Circuit Judge Alice Gray to block continued enforcement of Act 633 of 2017 until a trial that would determine whether the provision is legal.

To prevail, Haas will have to show that the identification law violates the state constitution and that his legal arguments are likely going to prevail at that yet-to-be-scheduled trial. He sued the secretary of state and the state Board of Election last month, challenging the legality of the law. Gray is scheduled to hear arguments at 9:45 a.m.

In his response to the lawsuit, Secretary of State Mark Martin asks the judge to throw out the petition, particularly because of the timing of the litigation.

Martin contends that suspending the ID law this close to the May primaries -- and on the eve of a bond election Tuesday in Maumelle -- would significantly disrupt election preparation, doing more harm to voters than any inconvenience Haas might have to endure under the identification law.

Martin also contends that the judge can't block the law as Haas is asking her to do because he has not taken the necessary steps to sue everyone put in charge of enforcing the law. To be effective, Haas should have included every county clerk in the state plus the corresponding county boards of election commissioners, Martin argues.

He also notes that no one has complained that the law has kept them from voting despite "numerous" special elections since August.

His attorneys argue that the law does not prohibit anyone from voting, even if the person doesn't show identification. Voters without IDs can still cast ballots by making sworn statements as to their identities and registrations, according to his response.

In October 2014, Haas was one of four voters, also represented by Priebe, who prevailed in a lawsuit that overturned the previous voter ID law at the Arkansas Supreme Court. The high court unanimously ruled the provision to be fatally flawed, although the justices disagreed on the reasons.

Three of the justices found that the 2014 law was not passed with the two-thirds majority vote required to change the voter registration process in the constitution.

Act 633 was passed 73-12 by the House of Representatives and 25-8 in the Senate, and Gov. Asa Hutchinson signed the measure into law last March. It went into effect on Aug. 1.

The law changed the voter-registration process set forth in constitutional Amendment 51 to require voters to prove they are registered before their vote can be counted.

That proof is photographic identification, like a driver's license or passport, that is issued by the government, but can also be in a format endorsed by the law, like a college identification card. The law also provides for the secretary of state to issue free photo voter-verification cards.

Citizens do not need photographic identification to register to vote, Haas notes in his lawsuit. Amendment 51 allows voter applicants to register using a copy of a current utility bill, bank statement, government check, paycheck or other government document with the applicant's name and address.

Haas contends that Act 633 is illegal because lawmakers overstepped their authority to implement it, ignoring provisions in Amendment 51 that restrict how much the Legislature can alter the registration process.

Under Act 633, voters are no longer guaranteed that their ballots will be counted unless they show photographic identification when they cast their ballots, the lawsuit states.