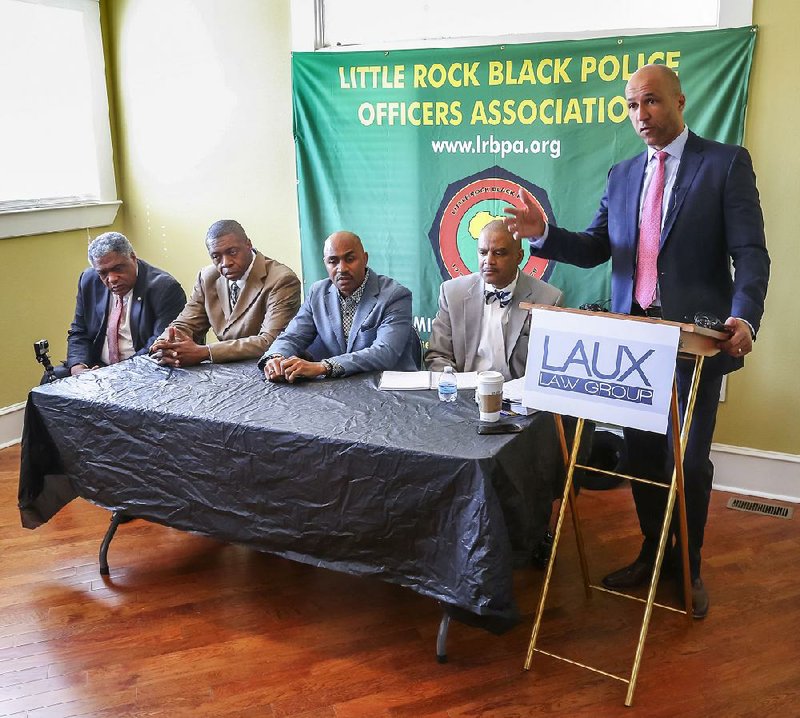 The civil-rights lawsuit, which names the city as the defendant, argues that the officers faced "disparate" treatment due to their race and age and were denied preferred positions, promotions and desired transfers.

Along with the discrimination claims, the lawsuit argues that Police Chief Kenton Buckner, who is not listed as a defendant, subjected the officers to a "hostile work environment" due to their involvement in the Little Rock Black Police Officers Association, an organization that has been critical of the chief's leadership. The hostile work environment, according to the suit, included harassment, suspensions and threats of demotion.

Reached by phone on Monday, Buckner said the city has lawyers who will handle the matter going forward and declined to comment further. Little Rock City Attorney Tom Carpenter said the city did not have any comment at this time.

"The department has been negatively impacted by racism and racial discrimination for generations. And I think that's beyond any type of serious debate," said Chicago-based attorney Mike Laux, who filed the lawsuit on Monday.

The Little Rock Black Police Officers Association is not a plaintiff in the lawsuit. Laux said he represents the officers and not the association.

According to the lawsuit, Davis, Threadgill and Whitten all spoke out "against bias, waste and/or misconduct." The litigation says the retaliation they received violated the Arkansas Whistleblower Act.

The complaint also states Buckner "sought to quell" the officers' free speech right due to their involvement in the black police officers association.

Laux said there are plans for two other officers -- Capt. Tanya Washington and Lt. Johnny Gilbert -- to join the complaint. He said they are waiting on right-to-sue letters from the Equal Employment Opportunity Commission.

"When we get those right-to-sue letters for Lt. Gilbert and Capt. Washington, we will file a complaint and have it consolidated with today's complaint," Laux said, speaking at a news conference Monday.

The federal complaint argues that Whitten, who became a lieutenant in 2005 and who holds a master's degree in public administration, was discriminated against when Buckner altered the criteria for the captain's test. The move by Buckner, according to the litigation, came after Whitten "expressed interest."

"The process was modified by Chief Buckner so that two younger white males, who were ineligible according to the rules, would be considered eligible," the lawsuit says.

The lawsuit also argued Whitten faced age discrimination. In one example, the department did not pick him to become a public information officer, a position the lawsuit said went to a younger officer with less experience.

The lawsuit also argues Whitten was "prevented from applying for other positions when he was informed that each had already been promised to other younger or white lieutenants who had been preselected and received personal phone calls instructing them to apply."

According to the lawsuit, Whitten received an "involuntary transfer" from the agency's Training Division in retaliation for reporting "inappropriate conduct" by a division commander.

The lawsuit also contends that Buckner has harassed Whitten, including an incident where the chief berated Whitten over a recruiting display at a hotel.

"There are many instances of similar conduct by white LRPD officers who were either not disciplined or disciplined ... less harshly," the lawsuit argues.

Davis reported earlier this year that he received a 10-day suspension after he informed the black police officers association about a recruit's racial slur on social media, and the association then informed the Police Department. The department, according to Davis, said the post should have been reported to a supervisor, and not doing so led to the suspension.

"It was also embarrassing because it showed that the [city] continued its historical failure to properly vet LRPD recruits," according to the lawsuit.

The complaint argues that instead of commending Davis for alerting the city to the Facebook post, the Police Department disciplined him in an "obvious act of retaliation for his exposing the [city's] deliberate indifference to racist recruits infiltrating the ranks of the LRPD."

The suit also states that Buckner went on Davis' Facebook page in October 2017, "poking around until he could find something to use as a pretext to discipline [Davis]."

Then, in November, Buckner disciplined Davis by issuing the sergeant a letter of reprimand based on the Facebook posts, the lawsuit says.

Last summer, the black police officers association sent a letter to city leaders calling for an investigation into the "discrimination, inequities, and disparaging treatment of minority officers and supervisors" under Buckner's leadership.

"We allege that black officers and supervisors are disrespected by white officers regularly, and black supervisors are only allowed to render discipline to a certain degree," according to the letter.

The organization also accused Buckner of being "very reluctant" to discipline white supervisors and officers while having "no hesitation when it comes to disciplining black officers and supervisors."

The complaints prompted a departmentwide memo from Buckner, who wrote that disagreeing with agency decisions is not the same as being discriminated against.

Buckner, in the letter, also said discipline is a subjective area of his duties as chief, and criticism of discipline is often based on rumors and partial information. The chief also wrote that he strives to be consistent and fair in his decision-making.