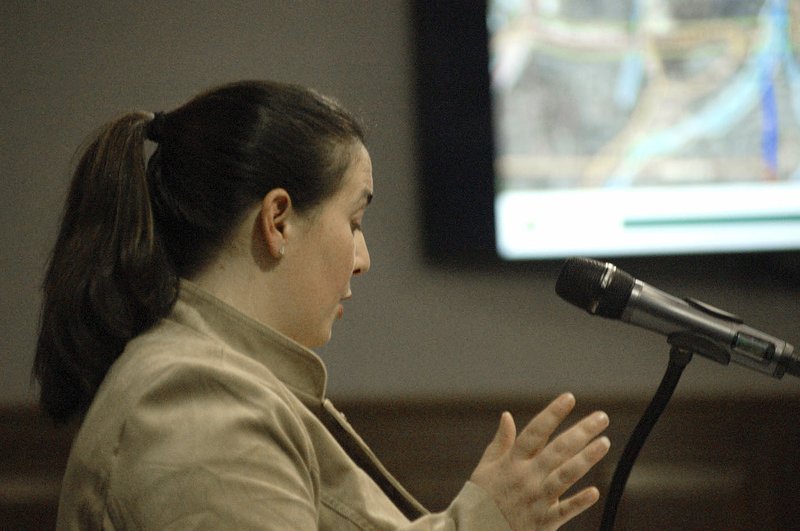 FAYETTEVILLE -- Including an extension of Rolling Hills Drive on the city's streets plan will better connect residents from east to west and serve as a guide to possible development, the Planning Commission decided Monday.

The commission forwarded an amendment to the city’s street plan to the City Council with a recommendation of approval.

Commissioners separated the motion into two parts. The first part, as voted 7-1, downgraded Rolling Hills Drive from its current classification as a future arterial road to a two-way collector street.

The second part of the amendment connects Rolling Hills Drive to Oak Bailey Drive, which would connect traffic to Old Wire Road and eventually Crossover Road. The commission voted 6-2 on that change.

• Allowing Central EMS to operate out of a 3,200-square-foot building at 833 N. Crossover Road. The land was previously zoned for single-family homes, although the building was originally a fire station and most recently a fire marshal’s office.

• Allowing TheatreSquared to have less window area on the outside of the resident building being constructed with its new facility at West Avenue and Spring Street than city regulations require. The first floor of the west side of the building will look into the sleeping rooms of resident artists.

In a separate issue, Alli Quinlan resigned from the commission as of March 1. Quinlan stated in a letter to the city that her architecture and landscape design firm had several opportunities for projects come its way, and pursuing those projects while serving on the commission could present the appearance of impropriety. The city’s Nominating Committee for various positions on board, commissions and committees meets Wednesday, with the City Council hearing those appointments March 20.

Both recommendations will require City Council approval at a later date.

The city adopted its street plan in 2011. It presents a long-range vision for the city's street network and doesn't allocate money or resources to any project by virtue of inclusion on the plan, Planning Director Andrew Garner said.

That original plan includes extending Rolling Hills Drive to Crossover Road and classifies it as an arterial road.

Garner said adding a street connection will relieve congestion from growth on the neighborhood's streets, would make it easier for emergency vehicles to navigate and provide more community convenience. Additionally, east-west connectivity has been a frequent issue among residents, and another connection would help alleviate that issue, he said.

Commissioner Matt Hoffman pointed out the city's power to compel a developer on the private land would significantly diminish without some kind of a connection marked on the plan. In that instance, the specific lines on the map don't matter as much, he said.

"I think it's incredibly important that we keep this in place," Hoffman said.

Many residents agreed with downgrading the street's classification but wanted the extension to be removed from the city plan. A total of 27 people spoke for more than an hour.

Ryan Billingsley, a Huntingdon subdivision resident, said extending Rolling Hills Drive to a 90-degree turn at Oak Bailey would create more harm than good. Billingsley added he's never felt the need to cut through the wooded area to get anywhere.

"It just seems very counter intuitive and it doesn't make any sense to me," he said.

Nicole Claesen, an Oaks Manor resident, said a petition with about 1,300 signatures requests the downgrade and removal of the extension from the city plan. Police have ticketed thousands of drivers over the last few years on Rolling Hills Drive with several accidents, she said.

"To extend that is not going to create anything safe," Claesen said.

Other resident concerns included wildlife in the entire 50-acre privately owned wooded plot and the need for a traffic light at Old Missouri and Old Wire roads. Many worried cutting through the neighborhood would create a more dangerous environment for children.

Joe Summerford, a resident on Oak Bailey, questioned the functionality of extending Rolling Hills Drive as staff had proposed. Old Missouri Road needs some attention for walk-ability, and the extension as proposed likely would need a traffic light at Oak Bailey, he said.

Several residents brought up a February community meeting in which planners and city administrators met with neighbors at Rolling Hills Baptist Church. Different road scenarios were presented during that meeting, including one showing several neighborhood streets within a development. Many of the speakers Monday supported that possibility.

Commissioner Matt Johnson, who lives on Warwick Drive, said an extension with a sharp turn out to Oak Bailey would be difficult for cars to navigate. He added he would rather see future city resources dedicated elsewhere.

"I'm with my neighbors in this. I don't really see the purpose of this connection," Johnson said.

The commission tabled a rezoning near Rolling Hills Drive and Old Missouri Road until March 26 in order to meet the city's notification requirements. The proposed rezoning would allow smaller lot sizes than the current zoning for about 20 acres northeast of the intersection.

The rezoning was taken off the City Council's agenda and moved back down to the Planning Commission level because the original application didn't mention compatibility with its surrounding land. The details are included in a revised application.