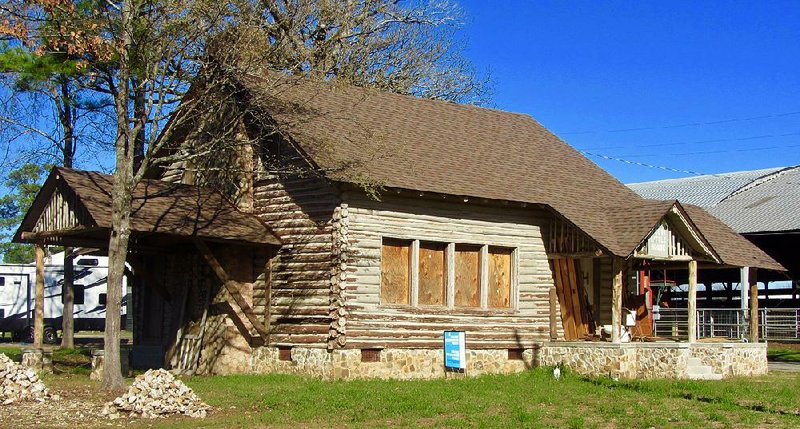 The Girl Scout Little House in Hope, built in 1938, is under restoration in the southwest Arkansas city’s Fair Park.

HOPE -- International fame as birthplace of America's newly elected 42nd president lay more than half a century in the future when Hope saw construction of a modest but noteworthy building now on the National Register of Historic Places.

The Hope Girl Scout Little House -- in the Hempstead County seat's Fair Park -- gained a spot three years ago on the National Register. Still under restoration, it is worth an admiring look as lagniappe to a tour of the city's headline site, the lengthily named William Jefferson Clinton Birthplace Home National Historic Site.

Constructed in 1938, when the Great Depression still cast a pall over the U.S. economy, the Little House was a project of the federal Works Progress Administration. The original groove plank door with the inlaid letters "L" and "H" remains intact.

Built of local logs and stone, the home was designed by East Coast architect Donn Barber as "a well-equipped small house for the American family of average size and moderate income" -- the situation of a good many Arkansans back then (and now).

When the Arkansas Historic Preservation program announced the landmark listing, it called the house "an outstanding example of New Deal-era construction. Though log cabins are nothing new in this region of the state, the use of this program to construct this wonderfully designed building goes to show how a community can pull together in a time of need and help shape the lives of both the men who helped build the 'Little House' and the morals and lessons learned in the Girl Scout program."

The WPA built a companion Boy Scout Little House, which was torn down in the late 1950s after falling into disrepair. The Girl Scout structure served initially as an example of low-income housing during a Better Homes Demonstration Week program sponsored by Better Homes of America and the General Federation of Women's Clubs.

According to Arkansas Historic Preservation, it then "was moved off-site and donated to the Girl Scouts of America. Consequently, the idea of a central meeting place dedicated exclusively to the activities of Girl Scout troops began to grow nationwide."

Hope's Girl Scout troops used the Little House through the 1950s. The property reverted to the municipality in 2011. Funding for the restoration is coming from Arkansas Historic Preservation, the city of Hope and Hope Tourism Commission.

As for the Clinton Birthplace Home, it continues to draw visitors from around the globe 17 years after the end of his two presidential terms. Perched in the living room atop a huge console radio of that era is a trophy Billy won in a local cutest-baby contest, along with a photo of the toddler, evidently a charmer even then.

Upstairs, the cubbyhole where the youngster slept is fitted out with a crib like the one from which Clinton recalls in his memoirs having listened to the trains rattling past and wondering "where they were going, and whether I would ever go there."

More displays on Clinton's boyhood and political career can be seen at Hope Visitor Center & Museum, housed in the 1912 passenger depot still served by Amtrak. Clinton artifacts here include a photograph of naked infant Billy lying stomach-down on a rug.

On one of several videos for view, Clinton asserts that "all I am and all I will ever be comes from here." He winds up with a line that wore out its welcome through overuse by the end of his winning 1992 campaign, but by now can have a certain nostalgic charm:

"And I still believe in a place called Hope."

Across from the downtown visitor center, Tailgaters Burger Co., 101 S. Main St., is rated No. 1 among Hope eateries on tripadvisor.com. Its cheeseburgers are hefty and delectable.