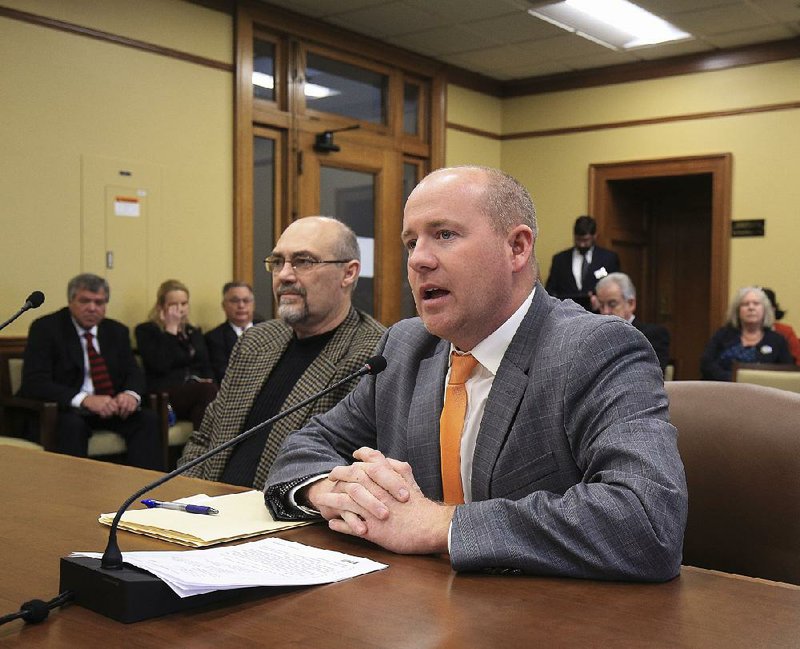 An Arkansas House committee approved with no dissent Tuesday a bill that would ensure limitations to what the public can comment on regarding state animal-farm permits that have already been issued.

The House Public Health, Welfare and Labor Committee approved on a voice vote with no dissent House Bill 1007, sponsored by Rep. Jeff Wardlaw, R-Hermitage. HB1007, which now will be considered by the full House, states that animal farms in good standing that apply for permit modifications cannot have anything more than the modifications commented on. The Senate Public Health, Welfare and Labor Committee will consider the Senate version of the bill at 9 a.m. today.

Wardlaw said the bill only puts in writing what the Arkansas Department of Environmental Quality already practices. He said it would not affect C&H Hog Farms, to which the department recently denied another permit. The farm is located on a creek that empties into the Buffalo National River.

"It's got a lot of bad rumors out there," Wardlaw said of the bill. "This bill does nothing to help or harm C&H Hog Farms at all."

The bill could not affect the hog farm because the hog farm doesn't have a liquid-animal-waste system permit issued under Regulation 5, which is a state permitting program.

Hog farm opponents told lawmakers they were concerned the bill was not written clearly enough to ensure that C&H could not be affected. The bill did not specify that it would only apply to Regulation 5 permits. C&H had a Regulation 6 permit, which is state-run permitting program that implements federal requirements. The farm still operates under that expired permit while the farmers appeal their permit denial.

"This language says only an 'existing permit,'" said Gordon Watkins, president of the Buffalo River Watershed Alliance. "This does not distinguish between Regulation 5 and Regulation 6."

Inserting a phrase that states it only applies to Regulation 5 farms or future farms would address his group's concerns, he said.

When asked by a reporter why he would not include language specifying Regulation 5 in the bill, Wardlaw said, "I don't think you need it."

Other representatives said they thought Regulation 6 would not qualify as a "state permit" but rather a federal one.

The bill applies to liquid-animal-waste system permits, which are typically hog farms. Poultry farms generally employ dry-litter-waste systems and don't require permits. Cattle farms require them only when the cows are confined, which they typically aren't.

Wardlaw said the Department of Environmental Quality's denial of C&H's permit application spurred the legislation because it caused distress to "financial institutions" that lend to animal farms. They were concerned that a farm, after receiving a permit, could be shut down because of public comments, and they wouldn't get their money back, he said.

Banks and farmers don't feel like they had the security they once had, said Michael Grappe, director of special projects at the Department of Environmental Quality.

"This bill simply provides them the protection they need so they can continue to do the business of farming in this state," he said.

When asked by a reporter which financial institutions had approached legislators with concern about lending to animal farms, Wardlaw said he would not disclose that.

Shortly after the House committee approved the bill, Sen. Gary Stubblefield, R-Branch, presented the same bill before the full Senate as Senate Bill 8.

"This is not exactly what we were working towards ... but that's what it came down to," he said.

Stubblefield said he wished the bill had been tailored to help C&H but that the final version was good enough because it would still help farmers. In response to a question from Sen. Joyce Elliott, D-Little Rock, about why the bill was needed, he said he didn't "even like the way the bill is written."

At midday Tuesday the governor, who called the Legislature into the special session, spoke to the Political Animals Club in Little Rock. Hutchinson said that Wardlaw's legislation is narrower than draft legislation circulated before the session that had some C&H opponents worried that it would keep C&H open.

"What happened was that a lot of the farmers in the community got concerned that, 'Well, if the C&H hog farm is going to be denied continuation of their permit, then somehow it is going to impact my right to farm,'" Hutchinson said. The bill should ease those farmers' fears, he said.

The Arkansas Department of Environmental Quality denied C&H Hog Farms' permit application in January after public comments raised concerns about the farmers not following proper protocol in their waste-application process. The farmers, because of the location of the farm, should have submitted an emergency action plan and a groundwater flow direction study.

C&H, which began operating in May 2013, is located on Big Creek, about 6 miles from where the creek flows in the Buffalo National River. The recreational river was visited by 1.5 million people last year. The farm is allowed to house up to 4,000 piglets and 2,503 sows and is considered a "large" concentrated animal feeding operation under federal standards. It's the only facility of that size in the Buffalo River's watershed, which has caused concern among some Newton County residents, the tourism industry, river visitors and conservationists.

"I thought it would be valuable for the members to come in and go ahead and start having the debate on some of these bills, and getting the bills in front of all the members could also allow public consumption of the bills to take place," Dismang said.

On the other side of the Capitol, House Speaker Jeremy Gillam, R-Judsonia, decided to send the bills to House committees for consideration-- which is the usual practice -- because Gillam indicated that representatives "were comfortable going through the committee process," said House spokesman Cecillea Pond-Mayo.

Both Dismang and Gillam said Tuesday they expect the session to end Thursday.

Also on Tuesday, the House Education Committee gave unanimous consent to a bill dealing with how siblings are counted when considering a school district's limit on the annual number of school-choice transfers.

The sponsor of the legislation, state Rep. Mark Lowery, R-Maumelle, said legislation passed in 2015 regarding the caps on school-choice transfers had erroneously counted all siblings as one student in an effort to prevent families from having to send their children to separate schools.

That caused some schools to go way over their limit on transfers, Lowery said. Instead, his bill, House Bill 1009, only considers siblings together as one student if that group of siblings would otherwise set the district over its transfer limit.

No one spoke against or objected to the bill, which now goes to the House for full consideration.