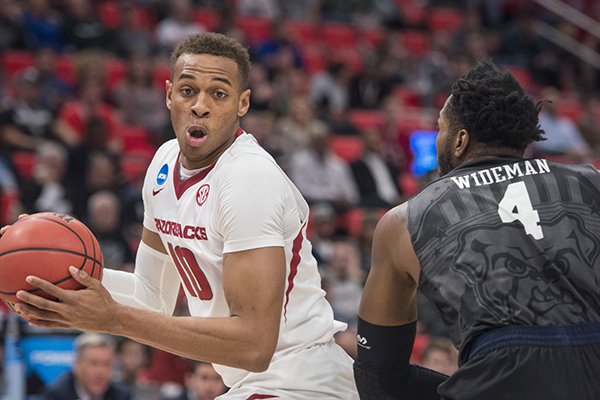 DETROIT -- Daniel Gafford was hard on himself after Butler beat the Arkansas Razorbacks 79-62 in a first-round NCAA Tournament game Friday at Little Caesars Arena.

"They pretty much humiliated me out there," Gafford said. "I couldn't get anything going for myself.

"I was getting pushed around like I wasn't anything. All the things I said I didn't want to happen, they happened today."

Gafford, a 6-11 freshman from El Dorado, figured to give the Razorbacks an advantage inside with the size and athleticism that have made him a projected first-round pick in the NBA Draft.

But Gafford struggled against Butler 6-8 senior Tyler Wideman and 6-10 junior Nate Fowler. He had 7 points, 5 rebounds and 3 blocked shots in 21 minutes.

"I didn't think Daniel had one of his better games," University of Arkansas, Fayetteville Coach Mike Anderson said. "I thought his intentions were there. I just didn't think he finished around the basket.

"But I thought he played with his heart. That's all you can ask."

Gafford came into the game shooting 61.8 percent from the field, but he was 2 of 9 Friday.

"We just wanted to keep him away from the basket. We got a couple of times fronting him a little bit too high and they threw it over the top and he was able to use his length.

"We wanted to stay between him and the basket and make it hard for him to score and give him no angles. I thought Tyler and Nate did a good job."

Gafford's only points in the first half came when he hit two free throws. He was 0 of 3 from the field as Butler took a 36-31 lead, and the Bulldogs stayed ahead the rest of the game.

"I wasn't focused," Gafford said. "I came out and thought it was going to be an easy game.

"I just don't want to talk about that right now," he said.

Butler does it again

Butler improved to 11-1 in NCAA Tournament openers since 2001 with its victory over Arkansas.

LaVall Jordan is the fifth Butler coach to be part of the first-round domination along with Thad Matta, Todd Lickliter, Brad Stevens and Chris Holtmann.

"That 11-1 record is because we've got good players, and they've got a lot of pride in the program," Jordan said. "So our seniors weren't satisfied with just getting here and getting to the tournament.

"Obviously, we had to earn that. But they've got bigger goals in mind. That's been the case the past two decades."

Jordan was a senior guard for Butler when the Bulldogs started their 11-1 run in openers and had 15 points and seven rebounds in their 79-63 victory over Wake Forest 79-63 in 2001.

The Razorbacks got a lift off the bench from freshman forward Darious Hall (4 points, 4 rebounds, 2 steals in 22 minutes) and senior forward Arlando Cook (4 points, 2 rebounds, 1 assist, 1 steal in 13 minutes).

Hall and Cook contributed to Arkansas' 27-6 first-half run when the Razorbacks moved ahead 29-27 after trailing 21-2.

"We had some outstanding performances from guys coming off the bench," Anderson said. "I thought that was really kind of what spurred us on. Give them credit. I thought they played well."

Arkansas outscored Butler by 14 points when Cook was on the court and by 11 when Hall played.

Arkansas came into the game with 122 dunks compared to 47 for Butler, but the Bulldogs won that category on Friday.

The Bulldogs had five dunks to two for the Razorbacks.

Arkansas freshman forward Daniel Gafford, who came into the game with 74 dunks, didn't have one. Both of the Razorbacks dunks were by Darious Hall.

Butler improved to 2-0 against Arkansas with the victories 87 seasons apart.

Prior to Friday's game, the Bulldogs beat the Razorbacks 37-21 on Jan. 2, 1931 in Indianapolis in the teams' only other meeting.

Anderson is 6-3 in openers, including 2-1 with the Razorbacks.

The Razorbacks were knocked out of the NCAA Tournament by a Big East team a year after they did the same to a Big East member.

Last season Arkansas beat Seton Hall 77-71 to open the NCAA Tournament. The Pirates were charter members of the Big East when it was formed in 1979.