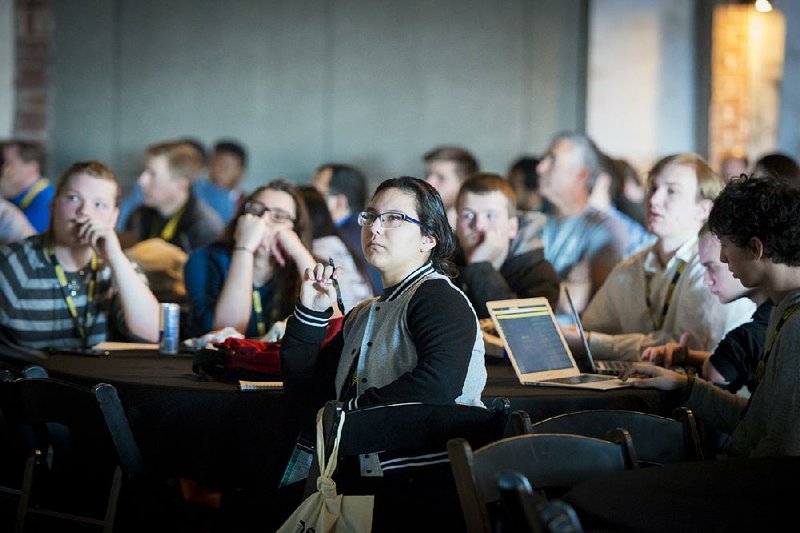 Julian Sanker, a ninth-grader at Hass Academy in Springdale, started a nonprofit and raised enough money for more than 20 other teens to attend a technology conference this week in Northwest Arkansas.

It was part of Sanker's plan to get more teens active in the region's tech community.

Sanker, 14, began the nonprofit TeenDevConf earlier this year with the goal of funding maybe 15 students to attend the Nowhere Developer's Conference in Bentonville.

The name, according to the conference website, stemmed from the idea that great technology developers aren't just found in California's Silicon Valley, Seattle or New York -- "They're right here, in the middle of nowhere," the website says.

Speakers with technology backgrounds from Walmart, Google and Mozilla, among others, gave presentations Thursday on current industry interests and issues they faced. More than 200 were in attendance, with most ranging between the ages of 25 and 45.

The older crowd, around 10 a.m., gathered in the main hall of The Record Downtown, a conference center, to learn about drawing with algorithms. The teens, meanwhile, gathered in a separate room to learn about the Congressional App Challenge, a federal effort to encourage youths to learn how to code.

"The fact that Google and Mozilla are here is pretty impressive," said Lucas Keller, 14, looking over the schedule. Keller is a student at the New School in Fayetteville.

Keller said he liked that his parents didn't have to drive too far so he could learn about cryptocurrency. Most of the time, Keller said, they'd have to travel out of state for similar events. Machine learning, a form of automation, piqued his interest.

"It could revolutionize different industries," Keller said. "It could replace trucking jobs, and all kinds of service jobs."

Sanker said he surpassed his fundraising goal of $1,337 in about a month. But not just anyone could attend the conference for free; first, interested students had to pass a coding test. If they passed with over a 90 percent grade, they got a grant.

Sanker's father, Dan Sanker, helped coordinate and grade the coding tests. He's the president and chief executive officer of CaseStack, Inc., a logistics firm in Fayetteville. Julian Sanker's goal is to continue to raise funds for more teens with interest in a tech career, so they can attend programming events throughout the state like professionals.

"I want the teens to be the most qualified people there," Sanker said.

Conference attendee Natalie Friede, 15, is also a student at the New School, where she says her favorite subjects are calculus and chemistry.

"I'm interested in tech stuff," Friede said, explaining why she wanted to attend the conference. "And my dad's always pushing it."

From a parent's perspective, computing jobs are one of the safest bets out there. In Arkansas, there are 1,625 open computing jobs, according to Coding.org, about three times the state's average demand rate. And nationwide, there are 500,000 openings, making it the number one source of new wages in the country.

Marie Lothridge, a teacher at Rogers New Technology High School, chaperoned with two other teachers from different state schools. After some of their students aced the online quiz, they convinced school officials to consider the conference a field trip. Other parents let their children skip school.