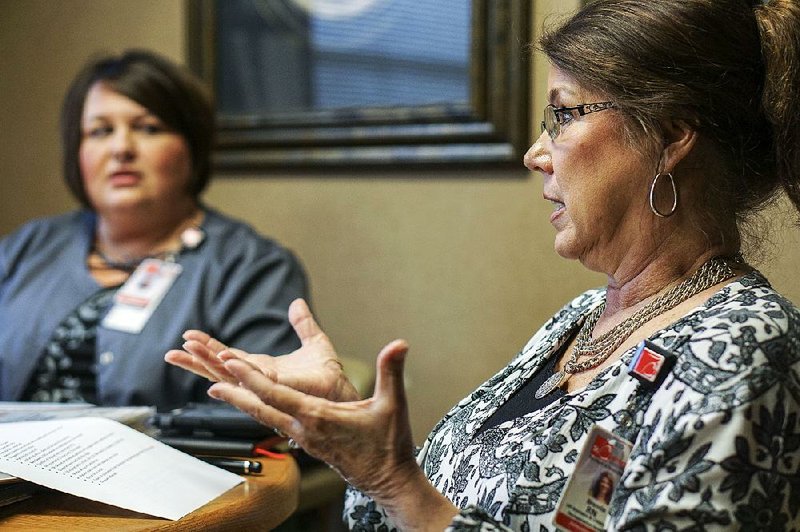 Karla Davis (left) and Brenda Million discuss how St. Bernards Medical Center responded during the 1998 Westside shooting and how its procedures have changed since then. Davis is St. Bernards’ regional leader for Northeast Arkansas Healthcare Coalition, and Million is vice president of Women’s and Children’s Services, Dialysis and Perioperative Services.

By the end of the day, five were dead: teacher Shannon Wright, 32; and students Natalie Brooks, 11; Paige Herring, 12; Stephanie Johnson, 12; and Britthney Varner, 11. Ten others were wounded.

A room in the hospital's Stroud Hall Building was set up as command central for families of the injured. Two sheets of butcher paper were tacked to the walls, and the hospital staff listed the names and statuses of the wounded.

Written next to the names of two students who had died were the words: "family at home."

Some of the relatives of the victims and of the shooters worked at the hospital.

"It was chaotic, but it was very organized chaos," Million said. "Everybody had a role, and everybody did their role."

In the 20 years since that day, St. Bernards has been called upon to be the voice of experience at conferences and events around the nation. The hospital's staff connects with others around the nation who have gone through one of the many school shootings since the Westside one. They compare lessons learned.

The nurses in the Emergency Department are required to have up-to-date trauma training. The hospital partners with the Arkansas State University's Regional Center for Disaster Preparedness Education program to teach basic and advanced disaster life-support training to all hospital staff members.

The state Department of Health and the Arkansas Hospital Association regularly train the hospital employees on fatality management.

"We are ready, and we are prepared if something like that should happen again in northeast Arkansas," said Karla Davis, St. Bernards' regional leader for Northeast Arkansas Healthcare Coalition.

Emergency room Director Carmen Smith, a nurse, said she has seen people around her become more passionate and proactive about training and being prepared.

"Tragic events of that magnitude do cause permanent changes," Smith said.