Supplier keeps busy buzzing about honey from bees in Chile 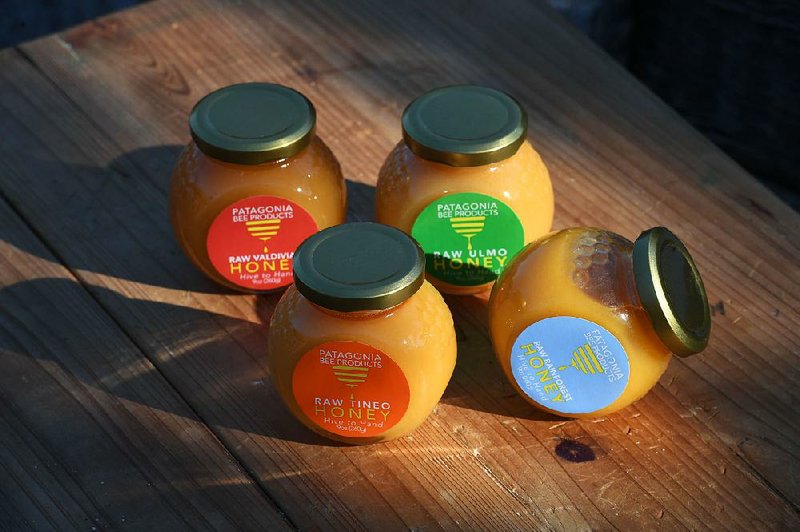 Patagonia Bee Products honey varies in shade depending on the variety of flowers in Chile visited by the bees.

Jacob Perry, founder of Patagonia Bee Products in Fayetteville, is one busy bee.

When he isn't on the road, spreading the gospel of single-origin honey to nonbelievers, he's keeping track of online orders, or helping chicken plant workers earn their General Educational Development diplomas, or teaching people how to salsa dance.

Still, he's managed to expand the stores that sell his bee products from five in January 2017, to more than 40 stores in 16 states, including California and New York. And he's snagged two partnerships with online catalogs Zingerman's, and most recently The Grommet.

At The Grommet, a 9-ounce jar of Patagonia honey starts at $13.50, nearly three times more than a 12-ounce bear of Fischer's honey at Walmart. The price point, to Perry, and other honey connoisseurs, is justified.

The honey is produced by a women's coalition of beekeepers in Chile who are paid more than average wages. Each variety has a unique flavor, based on where the bees have been. The effect is similar to the way the land and weather determine the quality of wine grapes.

Marina Marchese, a beekeeper and food writer, first experienced this comparison more than 10 years ago, on a trip to Italy. There she stumbled upon a tasting program where instructors taught people how to taste honey. Years later she wrote a book about it, explaining how flowers, weather and soil affect honey.

The Patagonia region's rain forests, mountains and valleys are largely untouched, said Marchese, founder of the American Honey Tasting Society. The Patagonia Foundation claims it is one of the most sparsely populated regions in the world.

"I believe the best-tasting honey comes from these untouched regions, because the bees are in an area that's chemical free essentially," Marchese said. "So you don't have pollution, high traffic, people."

A recent study by Science Magazine found that most honey contains measurable traces of pesticides known to harm bees. Of the 200 samples collected across the globe, 75 percent tested positive for "neonicotinoid" insecticides, which have been linked to declining bee colony numbers. The highest contamination rates were found in North America, Asia and Europe. The lowest came from South America.

Perry's interest in artisinal bee products stemmed from a backpacking trip he and business partner, Ross Ferguson, 31, took to Patagonia in 2011. There, Perry found honey unique to the region.

It wasn't until years later that the seed of an idea for a business model began to sprout, after the two men visited a honey cooperative operated by women. Perry works with six beekeepers for Patagonia Bee Products' four honey flavors. Two of them come from a single harvest yielding a monofloral honey attributable to a single plant species.

Patagonia's Rain forest honey is sweeter than the rest, with hints of cinnamon and honeysuckle. Tineo honey is warm and citrusy. Valdivian honey has notes of caramel and anise. And Ulmo honey carries hints of mint and lavender.

Bees, like humans, want the best food possible, Perry explained, causing them to pollinate certain flowers over others. Monofloral honey is possible when a key flower source is dominant in a region and when beekeepers coordinate the timing of the honey harvest with the blooming period.

Several U.S. monofloral honey companies have started within the past five years with products that reflect regions ranging from the Appalachian mountains to the Florida tropics. The public's interest in honey is only beginning to take off, Marchese said. She will be doing a honey-tasting workshop next month at Crystal Bridges Museum of American Art in Bentonville.

"It's probably the next superfood," Marchese said.

Perry was in Little Rock last week at the Green Corner Store appealing to restaurant and boutique store owners, hoping they they would purchase honey not sourced from the Natural State. Perry explains that honey is like wine. When it's mixed, a process most honey producers use, the flavors of a region are lost.

To maintain a supply of Chilean honey, Perry, 30, forecasts his sales and buys in bulk once a year. The first boxes arrived in the summer of 2016. The first U.S. orders shipped out that fall. A third of the honey shipped to Arkansas is stored at Perry's house. The other third at his partner's. And the other third at his mother's home.