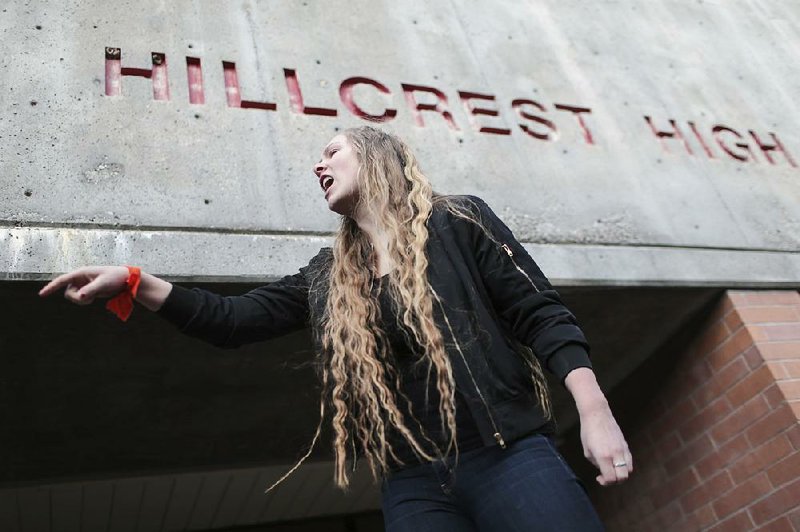 As she addressed the crowd during the walkout at her Idaho high school, Kylee Denny faced heckles and name-calling from a group of students carrying American flags, she said. The counterprotesters included many familiar faces, including her boyfriend's stepbrother.

To avoid making a difficult situation worse, Denny's boyfriend stayed in class during the rally at Hillcrest High School in Idaho Falls, which was part of Wednesday's national school walkout.

"I'm dating his stepbrother, which is really incredibly awkward and it's very tense because he was being so hostile about losing respect for me because I was walking out," said Denny, a 17-year-old junior who helped organize the protest.

The walkouts to protest gun violence that mobilized students across the country also created tensions in hallways and classrooms as a new generation was thrust into the debate over guns. While those calling for new restrictions stood in the spotlight, the surge of youth activism has exposed sharp differences of opinion.

Administrators and student leaders are also sorting through the fallout as some schools hand out discipline for those who defied school instructions and participated in the walkouts exactly one month after the massacre of 17 people at Marjory Stoneman Douglas High School in Parkland, Fla.

In some cases, personal relationships have been strained.

Ryler Hanosky said he was disappointed that his stepbrother, Denny's boyfriend, did not join the counterprotest.

The rally Denny helped organize was supposed to be for school safety, not gun restrictions, she said, but some misunderstood, becoming angry and calling names.

"You're just like, ooh, wow, OK, I have second period with you and I don't want you to think I'm trying to destroy your constitutional rights," she said.

In Woodbury, Conn., about 75 students walked out of class Wednesday at the 750-student Nonnewaug High School, meeting in the auditorium before walking outside. They were followed by another group of about a dozen counterdemonstrators, including some who chanted, "NRA is the only way!"

One student, Jess Dooley, 16, said the school in rural western Connecticut is small enough for her to know nearly everyone, but that she did not feel comfortable joining the walkout because of comments by gun-rights supporters. Tensions already had been high since the Parkland shooting as debate grew vehement over arming teachers, school shootings and gun control.

"Everybody knows how everyone feels about it," she said.

The day after the walkout, Dooley said, her civics teacher defused some tension by letting students take turns sharing their opinions on the walkout.

Organizers of the national walkouts called for such measures as tighter background checks on gun purchases and a ban on weapons like the one used in the Florida shooting. A protest against gun violence is also scheduled in Washington on Saturday , and another round of school walkouts is planned for April 20, the 19th anniversary of the Columbine High shooting in Colorado.

In last week's walkouts, some students tried to steer clear of politics entirely, including Jacob Shoemaker, a senior at Hilliard High School in Ohio, who was suspended a day for not following instructions because he stayed in a classroom instead of joining protests or the alternative, a study hall. School, he said, isn't the place for politics, and he wasn't taking sides.

In Pennsylvania, a superintendent issued detentions to 225 Pennridge High School students who walked out Wednesday instead of attending an assembly honoring the Parkland victims.

Elsewhere, scuffles broke out between walkout participants and students who had other ideas for how to spend the time. At Blythewood High School in South Carolina, students were packed together in a school atrium when some began talking during the moment of silence for the Parkland victims. Shoving broke out as some called for quiet.

"These kids, who were probably younger, they weren't against the protests," said Andrew Kilgore, an 18-year-old senior who said students would be better organized for the next demonstration. "They were just being disruptive. They wanted a reason to get out of class."