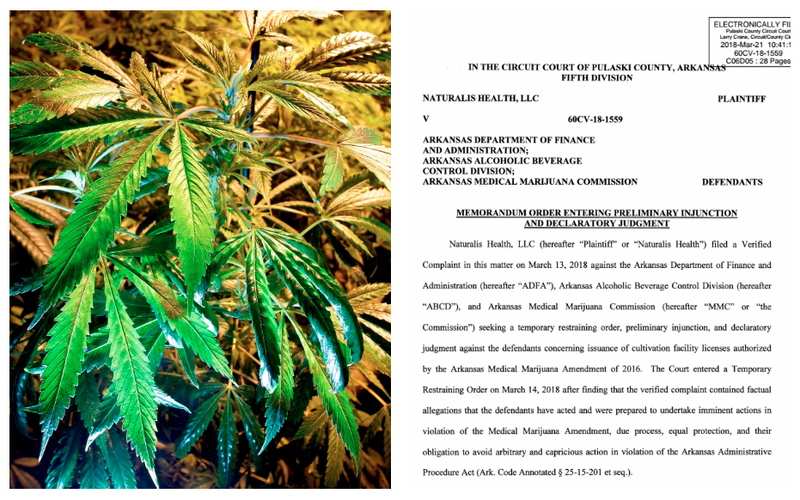 A file photo of marijuana is shown with a screenshot of the first page of Judge Wendell Griffen's order that placed an injunction on the permitting of Arkansas' first five cannabis growers.

In a 28-page decision, Judge Wendell Griffen issued a preliminary injunction barring the Arkansas Medical Marijuana Commission from issuing five cannabis-growing licenses. The injunction is a continuance of a temporary restraining order Griffen issued a week ago, just hours before the commission planned to formally award the licenses to five companies.

Wednesday's order, however, went a step further, declaring the commission's rankings of the 95 growing license applications "null and void."

For now, the ruling halts the rollout of the state's medical-marijuana program. Arkansans voted to legalize medical marijuana in 2016. The path forward is up to the state attorney general's office, which could appeal the ruling, but it was unknown Wednesday whether it planned to do so.

Naturalis Health LLC, one of the unsuccessful cultivation applicants, filed the lawsuit challenging the commission's procedures for evaluating proposals for the growing licenses. The lawsuit cited scoring irregularities, conflicts of interest and rule violations.

Griffen, in his order, sided with Naturalis on several of its arguments.

"To put it bluntly, the Medical Marijuana Commission and Alcoholic Beverage Control Division have proceeded in a manner that defies due process and the rule of law, rather than in a manner that respects it," Griffen wrote. "The Court takes no joy in reaching or declaring this conclusion, nor should anyone else treat the conclusion as anything other than disappointing and sobering. Amendment 98 to the Constitution of Arkansas, an initiative by the people, exists because Arkansans want to provide medical marijuana to persons who suffer from chronic, debilitating, and life-threatening health challenges.

"The prospect that Arkansans must now endure more delay before gaining much needed access to locally grown medical marijuana should be unpleasant to anyone concerned about providing relief to people who suffer from serious illnesses."

Both Griffen and state attorneys indicated during a hearing Friday that an appeal to the Arkansas Supreme Court was likely, regardless of Griffen's conclusions, but Nicole Waugh, a spokesman for Attorney General Leslie Rutledge, said in a Wednesday statement: "We are reviewing the circuit court's memorandum order and discussing it with [Alcoholic Beverage Control Division Director Mary Robin Casteel] and other affected state entities."

If the state doesn't appeal Griffen's ruling, Naturalis' lawsuit would continue to a hearing for a permanent injunction after several months of depositions and discovery, according to several attorneys interviewed Wednesday. Or, the commission could revamp the scoring process in a way that addresses the problems outlined in Griffen's order.

The Medical Marijuana Commission announced on Feb. 27 the five highest-scoring companies seeking growing licenses. The commission planned to formally license the cultivators on March 14 after each company paid a $100,000 licensing fee and submitted a $500,000 performance bond.

During the two-week interim, unsuccessful applicants filed a flurry of legal challenges and protest letters in attempts to stop the licenses from being awarded to the five.

Legal challenges have become routine during licensing phases in the other 28 states with medical marijuana programs. Applicants spend hundreds of thousands of dollars -- millions in Naturalis' case -- in attempts to obtain licenses to operate cannabis businesses.

The challenges delay the drug's availability, much to the chagrin of patient advocates. In Arkansas, 4,567 people have been approved for registry ID cards to buy medical marijuana once it's available, according to the Arkansas Department of Health. The patients will be allowed to use only medical marijuana that's grown and processed in Arkansas by facilities licensed by the state.

Little Rock attorney David Couch, who drafted Amendment 98, which legalized medical marijuana, said the amendment's main goal is to get medical cannabis into the hands of qualified patients as quickly as possible.

"I would encourage the state not to appeal or delay this any further and to accept Judge Griffen's decision," he said. "And to restart the application process with cultivation and dispensary facilities and have those applications scored by an independent, third-party, professional group."

The amendment created the Arkansas Medical Marijuana Commission to develop the process for licensing medical marijuana businesses. The commission consists of five appointed members, who decided to evaluate the applications themselves.

The state Alcoholic Beverage Control Division staff, which provides administrative support to the commission, reviewed the 95 cultivation facility applications to ensure that they met the minimum criteria before sending the proposals to commissioners for merit scoring.

Casteel, the division director, testified before Griffen on Friday that the 12-man agency did not independently verify that each proposed facility was at least 3,000 feet from a church, school or day care. She said that each application was sworn and notarized, and that any facility found to be out of compliance with the 3,000-foot rule would have its license revoked.

Griffen said the agency failed to exercise "diligence" and violated its constitutional duty by not verifying that each proposed facility was properly situated.

Griffen also took issue with the relationships between two commissioners and the owners of two companies that were to be awarded licenses. Commissioner Travis Story and his law firm have done legal work for Jay and Mary Trulove -- owners of Osage Creek Cultivation -- according to online court and secretary of state's office records. Another commissioner, Dr. J. Carlos Roman, has referred patients to a practice founded by Dr. Scott Michael Schlesinger -- one of the owners of Natural State Medicinals Cultivation -- according to Naturalis' complaint.

Roman scored Natural State Medicinals Cultivation's proposal more than 30 points higher than the average score he assigned the rest of the applications. Osage Creek Cultivation tied for the second-highest score among Story's evaluations.

"That proof is not nebulous, hypothetical, or fanciful," Griffen wrote, adding that it's enough to "create a reasonable suspicion of unfairness, even if it does not establish actual bias."

Finally, Griffen concluded that the commission violated its own rules by not evaluating and scoring whether those behind the applications for cultivation facilities had been affiliated with entities whose corporate status was revoked for failure to pay franchise taxes.

Griffen rejected several of Naturalis' arguments about proof of residency requirements and an unsuccessful applicant's right to a hearing before the commission.

Naturalis is one of two companies that have sued the commission. Three other unsuccessful companies have filed motions to intervene in Naturalis' suit, arguing that they have interests in the case's disposition.

Jay Bequette, an attorney for Naturalis, said the company was grateful for Griffen's decision.

"It was a well-written, scholarly opinion," he said. "We look forward to a hearing for a permanent injunction."

Don Parker, an attorney and owner of Delta Medical Cannabis Co., which stood to receive one of the five growing licenses, said his company is disappointed with the ruling.

"We followed and complied with all applicable rules, have been completely transparent, and have done nothing to justify the delay in receiving our license," Parker said. "We believe that our application was judged fairly and impartially, and that all rules of the Medical Marijuana Commission and Alcoholic Beverage Control Division were followed. We look forward to receiving a license from the state of Arkansas, and stand ready to cultivate medical marijuana for qualifying Arkansans as soon as possible."

Former Attorney General Dustin McDaniel, who is an attorney and co-owner of Natural State Wellness Enterprises -- one of the top-five-scoring applicants, said his group was evaluating how best to respond to Griffen's order.

"If the Court's ruling stands, the [Medical Marijuana Commission] will have to hire dozens, perhaps hundreds, of people to investigate every assertion made under oath on every application," McDaniel said in a statement. "That would have a severe budget impact on many agencies beyond just the MMC, and is simply not required by the rules or the Constitution." 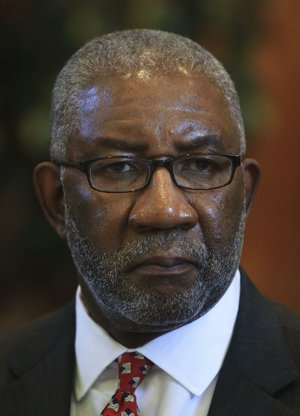 Photo by Staton Breidenthal
Judge Wendell Griffen is shown in this file photo. 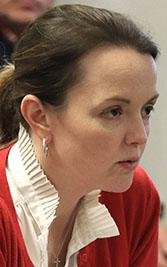 Photo by Staton Breidenthal
Mary Robin Casteel, director of the Arkansas Alcoholic Beverage Control, is shown in this photo. 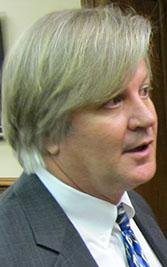 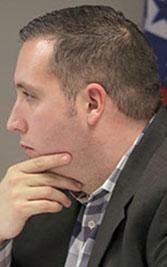 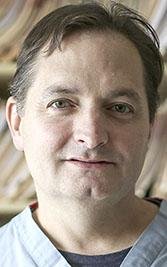