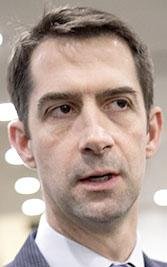 Rep. Tom Cotton, R-Ark., is interviewed by reporters following final votes for the week, at the Capitol in Washington, Thursday, Jan. 25, 2018.

Fentanyl and fentanyl analogues claimed more than 20,000 lives in 2016, more than heroin or cocaine, according to the National Institute on Drug Abuse.

The highly potent opioid is one of the deadliest drugs on the market; 100 times as powerful as morphine, Cotton said.

At a Capitol Hill news conference Thursday, the Republican from Dardanelle said fentanyl is "as much like a weapon of mass destruction as it is a drug" because of its toxicity.

A hundred pounds of the substance would be enough to kill as many as 18 million people, he added.

That amount of fentanyl was seized in New Jersey last year. A similar haul was intercepted in Baja California earlier this year.

The drug is ravaging communities across the country.

While his bill would tighten federal laws, he predicted that the measure would boost anti-drug efforts on all levels.

"Most of our prosecutors, most of our sheriffs and police departments work on interagency task forces. That includes the FBI and the [Drug Enforcement Administration] and the U.S. attorney's office. And we want to do everything we can as legislators here in Washington to provide tools in Arkansas and Louisiana and South Carolina to help protect our communities and save our kids' lives."

Cotton's bill would sharply "reduce the amount of fentanyl and its analogs required for mandatory sentencing minimums to apply in distribution cases," according to a description of the legislation.

According to Cotton's office, the bill would set these mandatory sentencing minimums in distribution cases:

• A conviction involving 20 grams of a substance containing fentanyl would carrying a sentence of 10-plus years (the current amount is 400 grams).

• For 5 grams of a substance containing fentanyl analogue, the sentence would be 10-plus years (the current amount is 100 grams).

• For 2 grams of a substance containing fentanyl, the sentence would be five-plus years (the current amount is 40 grams).

• For 0.5 grams of a substance containing fentanyl analogue, the sentence would be five-plus years (the current amount is 10 grams).

The bill also would provide resources to the U.S. Post Office to stop shipments of fentanyl and other synthetic opioids arriving from overseas.

Cotton portrayed the fentanyl epidemic as a "national crisis."

"I want to thank Sen. Cotton for leading on this," Sen. Lindsey Graham, R-S.C., told reporters.

"We should approach this as a national emergency. We should pass his bill as if lives depended on it, because they do."

Graham said that, as a former prosecutor, he's confident that Cotton's legislation will help combat the problem.

"As you drive up the cost of doing business in the drug trade, less of it will occur. And if you want to focus on fentanyl the way Tom is focusing on it, it will get so costly that people will go to some other business," Graham said. "The goal is to take this very dangerous drug and make those who handle it feel like it's not worth it anymore."

On Monday, during a speech in Manchester, N.H., President Donald Trump described the harm caused by fentanyl traffickers and advocated executing the worst offenders.

With help from the U.S. Department of Justice, "we will be focusing on the penalty that I talked about previously for the big pushers, the ones that are really killing so many people. And that penalty is going to be the death penalty," Trump said.

Addressing reporters, Graham argued that the death penalty would be appropriate in the case of fentanyl traffickers.

If the death penalty is an option, "that really will change the game," Graham said.

Sen. John Kennedy, R-La., said fentanyl traffickers need to be "punished to the full extent of the law."

Given the amount of harm caused by this type of drug, Kennedy said he has little sympathy for those involved in the trade.

This type of criminal is evil, plain and simple, Kennedy said.

"I don't think he or she is confused. I don't think he is mixed up. It's not a question of whether his mama loved him enough. ... If you're going to traffic in fentanyl, as far as I'm concerned you're just plain d***ed bad," he said.

All of the co-sponsors of Cotton's bill, thus far, are Republicans.

"We invited several Democrats to join us on the legislation and so far they've declined. I suspect when we bring it to the floor for a vote, though, not many Democrats will want to oppose getting tough on fentanyl dealers," Cotton said.