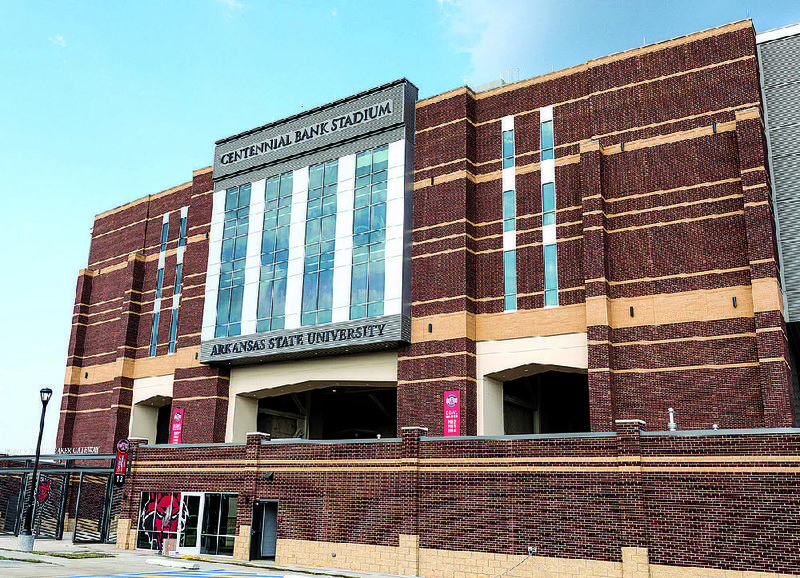 Welch cited communication missteps during the bidding and said “certain processes,” which he did not specify, will be followed in the future.

Jonesboro businessman Mark Fowler said the Red Wolves Foundation and an athletic department official provided misleading instructions to his home-and-commercial electronics company, HomeTroniX, when it bid for a roughly $500,000 project to furnish the $29 million stadium expansion with televisions and speakers.

Welch apologized to Fowler in a text message.

“Because it was a private venture, processes weren’t necessarily the same as a state project would have been,” Welch told Fowler in the message. “We will be working so that from this point forward even private projects constructed on our campus must follow certain processes.”

Across Arkansas, nonprofit foundations have undertaken multimillion-dollar capital projects on behalf of public agencies that they are organized to support. Foundations, because they are considered private, are not subject to the same strict procurement laws as the public agencies; they also frequently say that they can withhold information from the public.

The nonprofit Razorback Foundation has raised money, and holds contracts, for portions of the University of Arkansas, Fayetteville’s $160 million football stadium expansion and renovation project, for example. The nonprofit Arkansas Arts Center Foundation is partnering with the city-managed museum on its $70 million overhaul.

Fowler — whose family has made a fortune in banking and fast-food franchising — told the newspaper that he will no longer contribute to ASU, which has received millions from the family and its businesses.

“Not anymore. Not after this,” Fowler said, noting the family would honor any previously announced pledges. “That is the opinion of the family.”

The Red Wolves Foundation is paying for the expansion, which will include new seats, a waterfall display and new athletics training, academic and recreation space.

The nonprofit chose Sound Concepts of Jonesboro for the audiovisual work, though the contract is still being finalized, said Adam Haukap, the foundation’s executive director. Sound Concepts handled similar work for the expansion of ASU’s football stadium press box, which was completed in 2015.

Haukap, in a telephone interview, defended the bid process as “fair” and said he had no regrets over how it was managed. He stressed that the foundation had no interest in intentionally upsetting one of the university’s largest benefactors.

Records obtained from ASU under the Arkansas Freedom of Information Act, including the text message, shine light on the the process. Haukap worked alongside ASU’s assistant athletic director, Richard Zvosec, to vet bids for the audiovisual work and other expansion-related contracts and subcontracts, the records show.

An ASU inquiry — which did not result in a formal report, according to a system attorney — verified Fowler’s three “major points,” Welch wrote.

Among those claims: Fowler was told before bidding that a specific theater automation brand called Crestron Electronics was not a requirement, only to be told when his bid was rejected that his exclusion of the brand played a factor.

Fowler, who furnished the lowest bid price at $517,000, also said his company was instructed to reduce the number of televisions in its initial proposal, which was counted against HomeTroniX when the winning bid was selected.

“HT price was $517k, but had fewer tv’s, smaller tv’s and a control4 system (Not Crestron),” Haukap told Athletic Director Terry Mohajir in a brief email on March 8.

Sound Concepts provided three proposals, ranging from $533,000 to $649,000, according to a comparison chart obtained through an open-records request. No other companies bid for the work.

The university must advertise for competitive, sealed bids for purchases greater than $75,000, according to its procurement handbook. In those cases, all bids are reviewed at the same time.

The Red Wolves Foundation does not face the same requirements.

Fowler learned of the bid opportunity late last year and requested bid instructions, he said. The foundation first provided a copy of a proposal submitted by Sound Concepts — emails show the proposal was submitted in July — that listed the details of his competitor’s proposal but redacted the cost estimates.

Haukap and Welch — in his text message to Fowler — both verified that the redacted Sound Concepts proposal was provided to HomeTroniX.

Sound Concepts owner and president Ryan Heringer said that sharing proposals, as long as the prices are redacted, is “pretty standard in our industry” and that he was not concerned that his company’s work was provided to a competitor.

“The Foundation did tell us that they were getting other bids and that they were going to share our estimate with others so they could get [an] apples to apples comparison,” Heringer said by email. “To be honest, the foundation did the competitors a huge favor in saving them weeks of time by providing them an equipment list vs having to go through the drawings and documentation…”

Sound Concepts’ July proposal was not a formal bid, Haukap said. The company provided the proposal so that the foundation could generate project cost estimates for the stadium expansion before seeking formal approval from the nonprofit’s board of directors and the ASU board of trustees, he said.

Although the foundation is paying for the project, trustees first had to grant a lease to allow work to proceed.

After Fowler expressed interest in the bid, Haukap and Zvosec told him that including Crestron equipment was not required, on three occasions, including once in early February, Fowler said. HomeTroniX does not stock Crestron, but could have acquired it from a supplier and pitched it as part of the proposal if it was mandatory, he said.

“We confirmed that you were told that Crestron was not a requirement and then a new employee was hired who preferred Crestron, leading to the decision to use that technology,” Welch’s text apology to Fowler says.

That new employee was Chris Buttgen, director of football video, Haukap said. He was hired Jan. 29, according to a list of personnel actions approved at the ASU board of trustees March 2 meeting. The previous coordinator did not prefer one brand of equipment over the other, Haukap said.

Officials did not tell Sound Concepts that Crestron equipment was required, but it “does not make sense” to use different equipment because that brand was used in the press box expansion, Heringer said.

In an emailed statement, Hankins said the Red Wolves Foundation has been working to secure suppliers for several items related to the project.

“One of those suppliers contacted Dr. Welch to complain that he was being treated unfairly,” Hankins said. “Dr. Welch communicated with this individual to better understand his concerns, as he does when others have concerns of any kind that relate to Arkansas State. Dr. Welch shared some of the concerns expressed to him with the Red Wolves Foundation, along with a request that the Foundation be clear in its communications going forward.”

Haukap said he has not spoken with Welch or Damphousse about the matter. Hankins later said Welch’s discussion was with Mohajir, the athletic director, “who is expected to share concerns with the [foundation].”

As for why the system president apologized for how the foundation conducted its business, Hankins said Welch “is always interested in how any entity affiliated with the ASU System interacts with members of the public, and that includes foundations, businesses related to our public-private partnership projects, or one of our system campuses.”

ASU’s Fowler Center for performing and visual arts was named after Mark Fowler’s family when his parents, Wallace and Jama, made a $5 million contribution toward the project. Liberty Bank in 2012, when Wallace Fowler was chairman and chief executive, pledged $5 million in exchange for naming rights for the football stadium.

“I’m not upset about losing the bid,” Mark Fowler said. “The deception and dishonesty presented by [Zvosec and Haukap] basically voided our bid from day one, when they told us not to bid Crestron.”

The Red Wolves Foundation does not disclose a list of its donors or annual members, Haukap said, so it’s not clear how much the Fowlers regularly give outside of the publicized donations. It’s also unclear whether Heringer, of Sound Concepts, is a donor.

“With Mark and Wallace Fowler, their family has been great donors to us,” Haukap said. “I don’t know the advantage to us upsetting them. … If it was based off of who was the highest donor, then, obviously, the Fowlers, they win that battle against everybody.”

Mark Fowler said he’s scheduled to meet with Damphousse on Monday about his concerns.

“I don’t want an apology,” Fowler said. “I want someone to tell me, ‘Yes, y’all were not in the running. It was a done deal. You were set up on this deal.’”