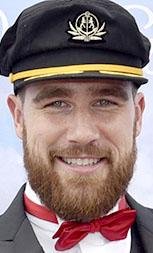 The Kansas City Chiefs will have a lot of new faces when the 2018 season begins.

Count Pro Bowl tight end Travis Kelce among those who are excited about the youth movement.

Former quarterback Alex Smith, who by all accounts had a tremendous season in 2017, was traded this offseason to the Washington Redskins. The 33-year-old former No. 1 overall draft pick will be replaced by second-year player Patrick Mahomes, who the Chiefs drafted in the first round of the 2017 NFL Draft.

Kelce, who was in Northwest Arkansas on Friday on a promotional tour for Old Spice, said he is looking forward to the season and embracing the changes.

"It's going to be a fun locker room," Kelce said in a telephone interview. "We've got a young group of guys who are hungry to play the game of football. And on top of that, it seems like everybody has great character behind the mask. So it's definitely something I'm looking forward to, but we won't really know how well or how oiled up this machine is until we get going in training camp."

Mahomes made one start last season -- Week 17 against Denver -- and led the Chiefs on a fourth-quarter winning drive in the 27-24 decision. Mahomes, who was drafted out of Texas Tech, passed for 284 yards and showed enough moxie that the Chiefs turned their offense over to him.

Kelce, who has been selected to three Pro Bowls and has twice been named All-Pro, will be counted on to provide more leadership and stability to the offense.

"I'm excited about the challenge," he said.

Kelce (6-5, 260 pounds) did not play in Mahomes' only start last season as he and several regulars sat out the game. The 28-year-old Kelce said although he and Mahomes have not worked together this offseason, they did last year and have been communicating this offseason.

"I think it's going to be a very smooth transition just because of how confident he is in his ability as well as his confidence in me being there for him on the field," Kelce said.

The Chiefs enjoyed a great deal of regular-season success with Smith leading the way, but that did not carry over to the playoffs where the team was 1-5 with Smith.

Kelce said Mahomes brings an element Smith did not have in his ability to keep plays alive by moving out of the pocket.

"I actually thought Alex would be more of a running threat," Kelce said. "I think the big difference is that Patrick has the ability to create. When things kind of break down, Mahomes can move and throw that thing anywhere on the run. So it's going to be fun to see what he can do this year."

Kelce said he is healthy after leaving the 22-21 loss to the Tennessee Titans in the first round of the playoffs with a concussion. He was injured in the second quarter after catching a pass over the middle and taking a blow to the helmet.

"I'm great. I'm doing just fine," he said. "I'm back in the weight room and ready to get back on the field."

Kelce has even more incentive to help the Chiefs achieve playoff success after his brother, Jason, won a Super Bowl last month with the Philadelphia Eagles.

"The motivation is for us to get better and to hack away and try and get that ring," he said.