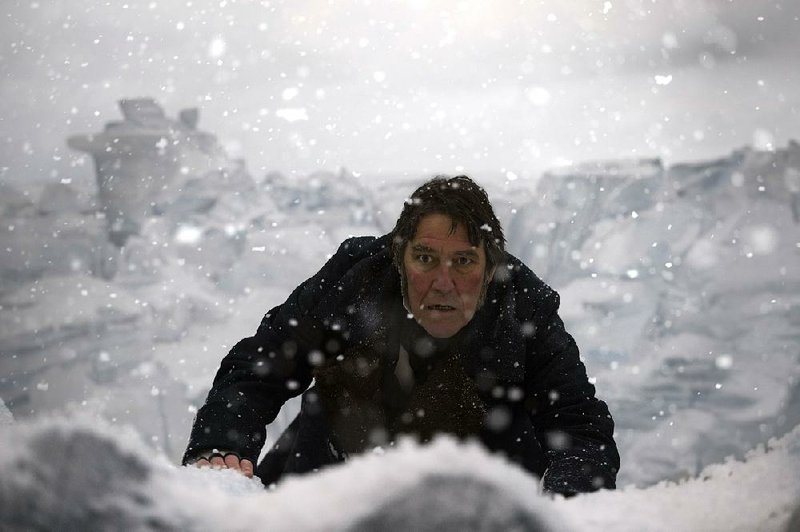 Hinds as Sir John Franklin on a doomed expedition to find the Northwest Passage. What they find is something truly horrific.

The Terror opens with a two-hour premiere at 8 p.m. Monday on AMC. With a title like that, is the series a horror tale? Action/adventure? Suspense/thriller?

Yes. All the above. The AMC tagline: "This place wants them dead. Enter a new hell on earth."

In an AMC interview, Scott says, "Terror is a very exotic tale based on fact. It's the British Royal Navy's search for the Northwest Passage. That's a fascinating challenge. Like anything extraordinary, we try to make it as real as possible. The fiction side of the story is this monster."

Monster? You mean like John Carpenter's The Thing? That was a parasitic mutating extraterrestrial in Antarctica. What the heck is this?

Maybe it's a white walker from Game of Thrones. After all, winter isn't coming in the Arctic. It's already there, where "death is snow and the great white ... nothing."

All AMC will say about a creature is, "The ice-bound crew discovers a monstrous predator, a cunning and vicious Gothic horror that stalks the ships in a desperate game of survival."

As if the actual facts aren't horrific enough.

In 1845, Franklin sailed from England with two ships, the HMS Erebus and HMS Terror, in an attempt to find a navigable route to the Pacific along the coast of North America through the Arctic Ocean.

Aside: Who in his right mind names his ship the Terror? It turns out it was a fitting moniker.

"Franklin's Lost Expedition" stayed lost a long time. It wasn't until 2014 that the wreck of the Erebus was discovered south of King William Island. Two years later, the wreck of the Terror was found 80 feet down at the bottom of the bay. It was in pristine condition. Forensic evidence indicates the crew met a grim end.

AMC tells us, "[They were] ice-bound, isolated and stuck at the end of the earth. The Terror highlights all that can go wrong when a group of men, desperate to survive, struggle not only with the elements, but with each other."

From what I've seen of the lushly photographed series, it'll have you gripping your armchair and wanting to put on a sweater.

• Billions, 9 p.m. today on Showtime. It's Season 3 for the complex drama about power politics in the world of New York finance. Paul Giamatti and Damian Lewis turn in brilliantly nuanced performances as, respectively, a savvy U.S. attorney and a brilliant hedge fund king.

• Trust premieres at 9 p.m. today on FX. Here's another series based on actual events. This is the multi-generational saga of the Getty family, "one of America's wealthiest and unhappiest."

The series begins in 1973 with the kidnapping by the Italian mafia in Rome of John Paul Getty III (Harris Dickinson), an heir to the Getty oil fortune.

Paul's enigmatic grandfather, J. Paul Getty Sr., is played by Donald Sutherland. Michael Esper plays J. Paul Getty Jr., and Hilary Swank portrays Paul's mother, Gail Getty. She is left to negotiate with the kidnappers, who can't understand why nobody seems to want their hostage back.

FX says, "Trust examines the corrosive power of money, and the complexities at the heart of every family, rich or poor."

• The Zen Diaries of Garry Shandling is a four-and-a-half-hour, two-part HBO documentary about the "iconic comedian" from Judd Apatow. Shandling, who died in 2016, was Apatow's friend and mentor.

The special airs Monday and Tuesday beginning at 8 p.m. each night.

• Silicon Valley, Season 5 arrives at 9 p.m. today on HBO. The comedy promises to be as wacky as ever.

• Barry, a new eight-episode dark comedy from HBO, debuts at 9:30 p.m. today. It stars Bill Hader (Saturday Night Live) as Barry Berkman, a depressed hit man who discovers a passion for acting while on an assignment in Los Angeles.

Although accepted by a group in the L.A. theater scene, Barry's criminal past won't leave him alone. Low-key hilarity ensues.