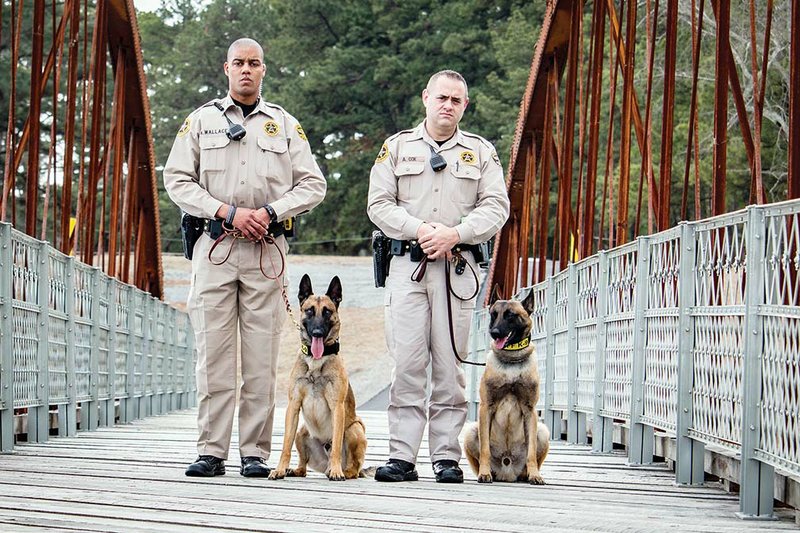 CONWAY — Terry and Timon are the newest crime-fighting duo in Faulkner County, even though they’re only about 2 years old.

Their breed is Belgian Malinois (MAL-in-wah), and they’re K-9 deputies for the Faulkner County Sheriff’s Office in Conway.

“We are beyond excited about this,” said Adam Bledsoe, public information officer for the Sheriff’s Office.

“We got them probably August of 2017, but there was lots we needed to do — equip them, … and they’ve been doing lots of training,” Bledsoe said.

The dogs are assigned to patrol with deputies Adam Cox, who is Terry’s handler, and Keenan Wallace, who has Timon.

“They’re multiuse dogs,” Bledsoe said. Terry, who will be 2 in June, and Timon, 2, are certified law-enforcement officers. They are trained for tracking, illegal-narcotic detection and violent-criminal apprehension.

The K-9 unit was reinstituted after a 15-year hiatus, said Chief Deputy Matt Rice of the Faulkner County Sheriff’s Office.

Bledsoe said the cost for the dogs and training was $9,350. Sheriff Tim Ryals worked with former 20th Judicial District Prosecuting Attorney Cody Hiland, now a U.S. attorney for the U.S. District Court for the Eastern District, who gave the money to the Sheriff’s Office. Bledsoe said the money was from asset-forfeiture funds, and the dogs came from the Little Rock K-9 Academy.

Cox said when he received an email that Faulkner County was reinstating the K-9 program, he jumped on it. Cox was interviewed and approved to be Terry’s handler in September 2017.

Cox has been in law enforcement since 2002 and a Faulkner County deputy since 2013. He was a dog handler at the Jacksonville Police Department, too.

“In my opinion, being a K-9 handler is the best job you can have in the department,” Cox said. “I love animals; I love dogs. It’s fun training with them and working with them and seeing your progress and growth with the dog, how intelligent they are and how smart they are, like figuring stuff out.”

Terry has already made an impact, Cox said.

“He’s tracked; he has done narcotic sweeps with narcotics found in the vehicles he’s swept. He has not done any criminal apprehension,” Cox said. “You’ve got the grounds to release your canine; it’s called patrol certification.”

The dogs are trained not to be aggressive until the handler gives the command.

“If you’ve got somebody that runs from you that has warrants or has committed a crime, … a deputy will call us. They give us the direction of where the [suspect] went, and we go through our ritual of trying to get the dog on the track. Once the dog picks it up, we’ll go till he loses the scent, loses the track or finds the person.”

It might be a missing elderly person or a child whom Terry or Timon track.

“It’s not always going to be criminal,” Cox said. “The reward is finding whatever he was looking for.”

The dogs don’t play together, but they sometimes work together, he said.

“It’s the alpha mentality. … We don’t just let them run around and play together,” Cox said. “There are times they both might need to be deployed — it might be a long track or multiple suspects that need to be apprehended. If we go out and do school sweeps of the lockers at big schools, a dog is going to get tired after a certain point.”

“He and the 2-year-old are like best friends,” Cox said.

Cox said Terry is a good friend and partner to him, too.