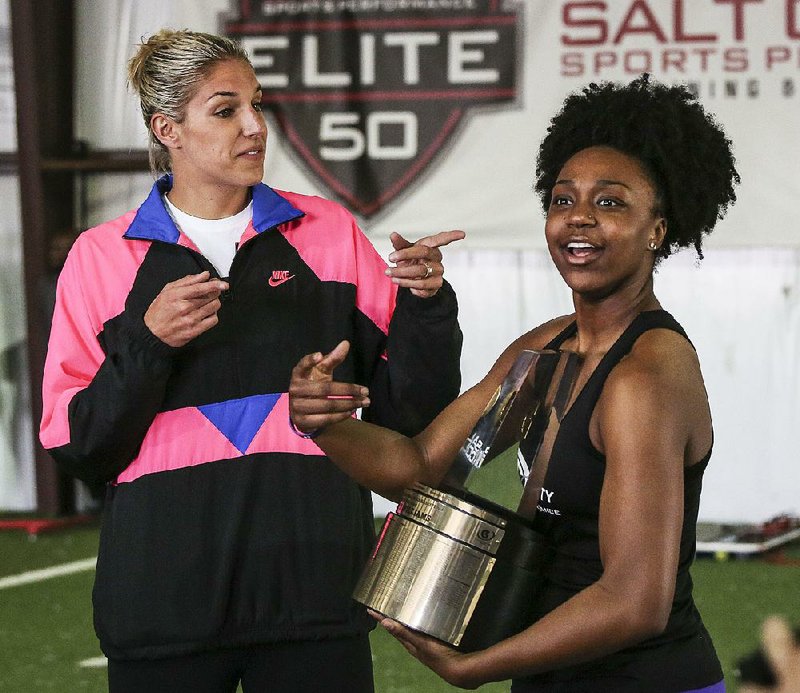 BRYANT -- The bucket list for Christyn Williams has overflowed.

Williams, the 5-11 senior guard who led Central Arkansas Christian to the Class 4A state championship earlier this month, became only the third high school athlete from Arkansas -- and the first woman -- to be selected as a Gatorade National Player of the Year.

In a surprise ceremony at the Salt County Performance Center in Bryant, Williams -- a UConn signee -- was presented the trophy by Gatorade officials and four-time WNBA All-Star Elena Delle Donne.

"When I saw [Delle Donne], I freaked out," said Williams, who said she had no idea the video crew that had been following her the previous two days was there to capture the award ceremony. "I've seen her play a lot. She's someone I look up to."

Delle Donne, who has been affiliated with the Gatorade program since 2014, said Williams is a "beast" on the court.

"I watched a couple of clips of Christyn when I found out she had won the award, and it's fun to watch her attack the basket," said Delle Donne, who currently plays for the Washington Mystics and won the league's MVP award while playing for the Chicago Sky in 2015. "She's strong. She's ready for the college level. You can just look at her body and you can see that. I can't wait to see her get after it at Connecticut."

The goal-oriented Williams led the Lady Mustangs to a 36-1 record on their way to a state title, winning the state tournament MVP award in the process. Earlier this year, Williams was selected to the McDonald's All-American team, named to the Naismith High School All-American Team, the Women's Basketball Coaches Association's high school player of the year, and she became a three-time winner of the Gatorade Player of the Year from Arkansas. All of those awards were originally on a list Williams made for herself prior to this season.

The national Gatorade award was icing on the cake.

"My goal was to win the state Gatorade award for the third time, but honestly, I didn't think about the national award," Williams said. "But once I figured out I was in the running for it I said, 'Sure, I'll take it.' "

Williams is the second consecutive UConn recruit to win the award. Megan Walker of Richmond, Va., was the 2017 winner. Senior Charlie Colliers, the Texas state player of the year and a University of Texas signee, and junior Samantha Brunelle, the Virginia player of the year, were the other finalists for the 2018 national player of the year.

The only other winners from Arkansas were boys basketball player Corliss Williamson of Russellville in 1992 and football player Mitch Mustain of Springdale in 2005. The Gatorade awards started in 1986. 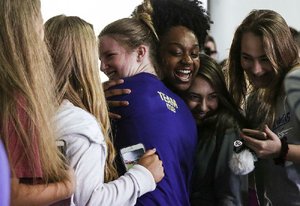 Photo by Mitchell PE Masilun
Christyn Williams (center) gets a hug from friends and teammates after being named Gatorade National Player of the Year on Saturday at the Salt County Performance Center in Bryant.