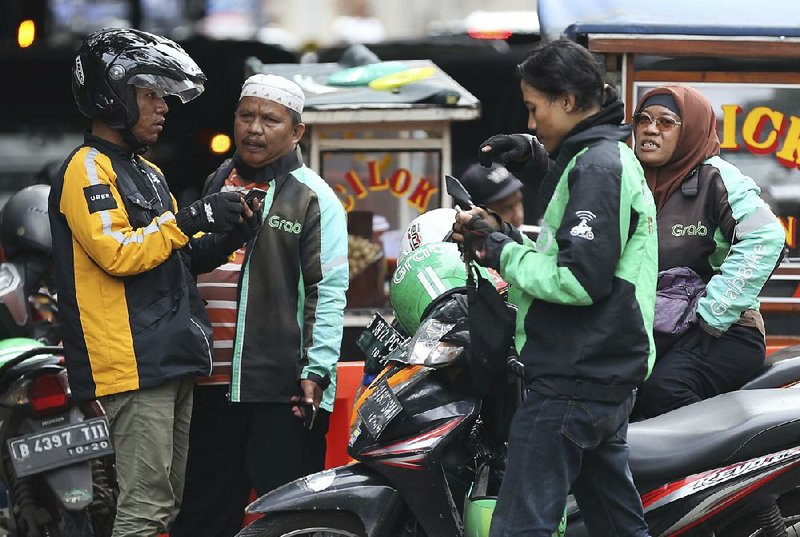 An Uber rider talks with a Grab rider in Jakarta, Indonesia, on Monday. Ride-hailing giant Uber is selling its business in Southeast Asia to regional rival Grab in its latest withdrawal from a daunting overseas market.

Uber will sell its business in Southeast Asia to a local competitor, Grab, the ride-hailing company announced late Sunday, in a deal that experts say is designed to position Uber for an initial public offering next year.

Grab will purchase Uber's ride-hailing and food delivery operations in the region in a deal valued at several billion dollars, according to a person familiar with the acquisition who spoke on the condition of anonymity because he was not authorized to speak publicly. Uber will receive a 27.5 percent stake in the Singapore-based Grab, and Chief Executive Officer Dara Khosrowshahi will join Grab's board, the companies said.

"Today's acquisition marks the beginning of a new era. The combined business is the leader in platform and cost efficiency in the region," Grab CEO Anthony Tan said in a statement.

Uber's sale in Southeast Asia, where Grab claims 5 million daily users, follows several strategic deals in competitive international markets. Yandax, a Russian rival, merged with Uber last year in a deal valued at $3.7 billion. And in 2016, Uber sold off its local operations to the dominant Chinese ride-hailing service, Didi Chuxing. Like the prior transactions, the deals free Uber to invest in other, more lucrative markets, while granting the company a stake in their competitors' expanding businesses, experts say.

Khosrowshahi has been pushing to bolster the financials of a company that's burned through $10.7 billion since its founding nine years ago. He signaled during a trip through Asia last month that he's committed to other key markets such as Japan and India. But its latest exit suggests Uber is more than ever dependent on its home market of North America, not unlike Khosrowshahi's previous U.S.-centric employer, Expedia Inc.

The deal "will help us double down on our plans for growth as we invest heavily in our products and technology," Khosrowshahi said in the statement.

The cease-fire marks a victory for Grab as well as SoftBank Group Corp., the biggest shareholder in both companies. Masayoshi Son's firm is pushing to reduce competition in a Southeast Asian ride-hailing market forecast to reach $20.1 billion by 2025. Uber and Grab, together with two other SoftBank-backed ride-hailing firms -- India's Ola and China's Didi Chuxing -- provide about 45 million rides a day, according to SoftBank presentation material in February.

Grab, which started out as a taxi-hailing app in Kuala Lumpur in 2012, later became the region's dominant ride-hailing service with $4 billion raised from investors. It was most recently valued at $6 billion, according to CB Insights. Today, with more than 86 million mobile app downloads, it offers a wide range of ride-hailing services in 191 cities across Singapore, Indonesia, the Philippines, Malaysia, Thailand, Vietnam, Burma and Cambodia.

David Kass, a professor of finance at the University of Maryland, said the deal with Grab is part of a broader strategy to make the company look as attractive as possible for potential investors. "Uber is looking ahead to their expected initial public offering in 2019, and they need to shore up their balance sheet and income statement," he said. "They are focusing on where they believe they are more likely to succeed, both in terms of profits and in terms of sales growth."

Khosrowshahi has already begun to narrow Uber's losses, shifting the company's strategy from growth at all costs to a more measured, pragmatic approach. According to reports, the company suffered $4.46 billion in losses last year, but improved over time, losing $1.1 billion in the fourth quarter, compared with $1.5 billion in the third quarter.

"One of the potential dangers of our global strategy is that we take on too many battles across too many fronts and with too many competitors," Khosrowshahi told Uber employees, according to an email posted by the company Sunday night. "This transaction now puts us in a position to compete with real focus and weight in the core markets where we operate, while giving us valuable and growing equity stakes in a number of big and important markets where we don't."

Uber has already invested $700 million in Southeast Asia, according to the person familiar with the sale. The company has no plans to take a minority stake in any other international markets and will continue to invest in its core markets overseas, including India, the Middle East and Latin America, the person said.

Information for this article was contributed by Yoolim Lee and Eric Newcomer of Bloomberg News.